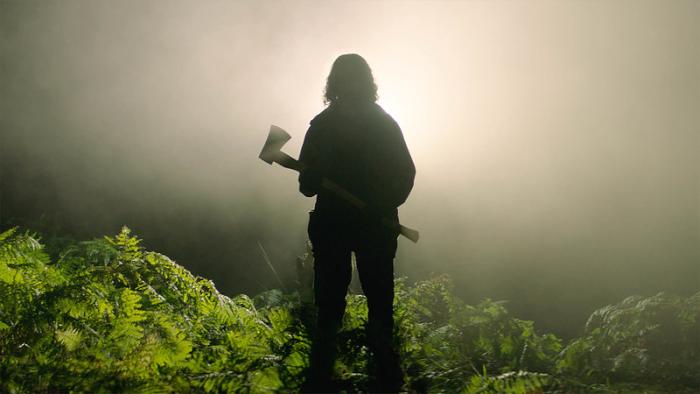 Review: The Psychedelic Freak-Out Folk-Horror of Ben Wheatley's 'In the Earth'

Wouldn’t it be nice to go for a walk? Last spring and summer during the intensest patch of New York City’s COVID lockdown, I discovered a park near my house that I’d never been to, a rambling overgrown thing along the river full of cliffs and rock-formations that turned out to be the perfect place to do just that. Once or twice a week, to stare at something besides the walls or my computer, I’d lose myself in that place for hours, hardly seeing another living soul. The silence of the forest was beautiful but eerie, as it ever is, but the real eeriness lay beyond the trees in the unnatural silence of the city. The gift was to be able to confuse the one for the other.

Around the same time, writer-director Ben Wheatley left his own London lock-down and accomplished a whole lot more than I did, but in the same spirit, by heading into the British woods and making himself a psychedelic freak-out Folk-Horror movie called In the Earth in secret. Set during an unnamed and not-unidentical pandemic Wheatley sends his characters off, yes, into the forest for a walk, weaponizing that preservationist instinct—fresh air, open spaces—with a maelstrom of isolationist madness. The last place any of us are safe is astride a perverted nature.

We meet Dr. Martin Lowery (Joel Fry) parting the mist in front of some sort of lodge. It’s the kind of place where you’d get a map, some potato chips, and a rendezvous with a loo before a hike. There, a few men in hazmat suits greet him. Martin’s been in isolation for several months we quick discover, and he’s got the look all of us know from the mirror from our own recent tours of duty—dazed, hesitant, slightly feral around the edges. Conversation is stilted but we learn he’s there to meet up with another scientist, a Dr. Wendell (Hayley Squires), who’s further out in the woods even still. She’s doing work that compares the plants and their roots to a neural network, a brain, with its own system of communication. Dr. Wendall wants to talk to the trees.

In the grand tradition of science-fiction movies where scientists start trying to speak in languages that they don’t understand and to forces their tiny human-being brains cannot comprehend, that’s the fast track to madness. What Martin finds in the woods, alongside his capable and sanity-based tour-guide Alma (Ellora Torchia from Midsommar, a film this film definitely seems in communication with), is madness on multiple fronts: Abandoned tents full of baby toys and witch books; a scraggly woods-man living life off the grid (an affably terrifying Reece Shearsmith); and finally the good doctor herself, perched among the pines, conducting a full-scale EDM rave with the bushes.

Oh and did I mention the local boogeyman called Parnag Fegg?

In the Earth is the sort of movie that’s so busy showing you more than it wants to explain that a local boogeyman named Parnag Fegg can get a little lost among the spore-spitting puffball fungi and strobe-shows set to a pulsating Clint Mansell score. Wheatley definitely bites off more than ten mouths could chew, but his wild-eyed chomping around on everything within reach for just a taste of meaning sure feels relatable at this moment in time. And In the Earth, while messy and semi-voracious, feels like a better description of this slobbering now than almost any documentary. Most especially as it descends further into body-shredding, sanity-melting passages of madness and bad, bad tea.

Now in theaters: In The Earth was originally reviewed out of Sundance 2021.

← Watch a Sloth Casually Crawl Over an Anaconda | Review: Sebastian Stan In 'Monday' Makes Us Manic For The Fun Days →