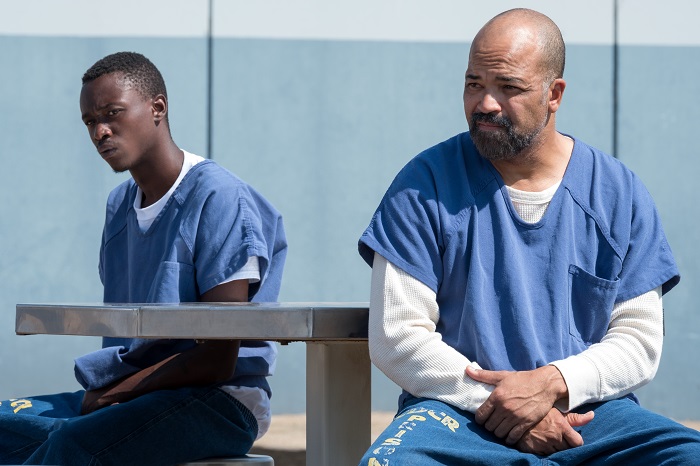 All Day and a Night is written and directed by Joe Robert Cole, who co-wrote Black Panther and co-produced and helped write The People v. O.J. Simpson: American Crime Story, Ryan Murphy’s first foray into true-crime adaptation. Sometimes All Day and a Night feels like that series, with a reliance on highly dramatic moments—domestic and child abuse, bloody massacres, prison violence—rather than sustained character development. And because of that, then, the movie’s emotional impact is summarily flattened: The characters aren’t really fleshed out, so their motivations don’t entirely stick, and then their choices don’t resonate very well, and then the consequences they suffer don’t carry as much impact. It doesn’t help that All Day and a Night jumps around between three different timelines in such a way that any consistent momentum is abandoned, and any flow the narrative might have had if told linearly is lost in this jagged format. 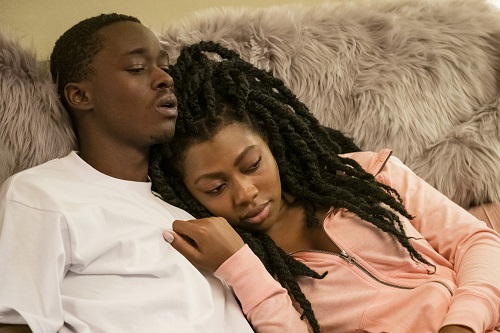 The film begins with its most technically accomplished scene: In Oakland, California, 20something Jahkor (Sanders, whose jutting jaw and bristly energy you might recall from Moonlight) spits bars in a parked car (“They’d rather break us than build us in this fuckin’ system”), eases his way out with a gun in each hand, sneaks up along a fence line, dashes his way into a backyard, breaks into a house, makes his way up to a little girl’s bedroom, and ambushes her parents when they come to put her to bed. Jahkor opaquely mentions history with the man, Malcolm (Stephen Barrington), but we don’t know what it is; Jahkor teases at it before murdering Malcolm and his wife both. Later, at his sentencing, Malcolm’s mother-in-law begs him to reveal what his motivations were, but Jahkor never says a word. And when he arrives in prison, scoping out the other inmates, he runs into a familiar face: his father JD (Wright, who just wrapped up the third season of Westworld).

With that relationship established, All Day and a Night begins its haphazard timeline, presented as the way Jahkor is working through his memories and making connections regarding what experiences led him here. “Where would you begin?” Jahkor wonders in a voiceover, and then we’re off. Going back to his childhood, where he was bullied, beaten by his father for not sticking up for himself, and then learned the lesson of striking back more fiercely to gain respect. Going back to his late-teen years, during which he and childhood friend TQ (Isaiah John) made their money robbing drug dealers while their other friend Lamark (Christopher Meyer) joined the U.S. Army. Still later, when now-aspiring rapper Jahkor learned he had a child on the way with girlfriend Shantaye (Shakira Ja’nai Paye), when Lamark returned in a wheelchair from overseas, and when TQ began spending more time with established rapper T-Rex (James Earl), whom Jahkor hates. And reigning over the neighborhood, aware of this all, is drug dealer Stunna (Yahya Abdul-Mateen II), who with his wife La-Trice (Rolanda D. Bell) by his side tries to keep one move ahead of anyone coming for his throne.

It would be helpful if these stories were told linearly—if we followed Jahkor throughout the course of his life to see how his coming of age was influenced by his childhood, and his adulthood influenced by his coming of age—because that straightforward structure might make certain relationships more meaningful. Instead, the way they’re presented seems to be based more on Jahkor’s remembrance of life lessons and formative moments, and how they led him down a path of “Take what you want, do what you want. Get yours, but fuck everybody else.” But jumping around in time leaves gaps in character and story development, and the people who suffer are not only Jahkor as our central protagonist, but also the women around him—his mother, his girlfriend, his grandmother. The movie pays these women lip service as the foundations of black families, but then makes them the recipients of constant abuse and disrespect from their sons, their ex-lovers, their relatives, and even random acquaintances.

That issue is sort of a microcosm of the greater problem plaguing All Day and a Night, though, which is its presentation of itself as a film giving us hard truths. Jahkor’s narration, while poetically written, makes clear the problem here. Filmmaker Cole acts as if he’s the first person to ever observe “when violence is all around you, you get used to it,” or to realize that our criminal and legal systems disproportionately punish black people, or that casual racism leads truly traumatic scars. There are no other black experiences than the one he presents here as full of misery and weighted with the effects of slavery, and Cole treats these revelations as simultaneously perfunctory and also earth-shattering. It’s a mixture that makes for tiring viewing. Sanders is emotive enough that you can see the wound each of these experiences leaves behind, but the movie never makes room for Jahkor to surprise you, or to surprise himself. The only characters who are truly live wires are Stunna, a secret chef who delights in cooking mac and cheese and deviled eggs while keeping an assault rifle in his kitchen, and La-Trice, the shrewd brains behind their drug-dealing operation, and Abdul-Mateen and Bell are clearly having fun. But even they are entangled in the effects of the various timelines; a reveal involving Stunna is telegraphed so clearly that when it arrives, there’s no real surprise.

“Tiny cuts—you know it doesn’t matter, but you still feel that shit,” Jahkor says after a customer at a shoe store where he works assumes he’s a shoplifter, and before he hears one of his coworkers, a young white woman who thinks wearing Fenty Beauty lipstick makes her hood, complain about him. That line of dialogue devastates, and when All Day and a Night focuses more inwardly on Jahkor, it has affective power. A scene where Jahkor jumps on a bike to pedal to Shantaye’s house resonates for how clearly it shows Jahkor’s youth but also how starkly it contrasts him with the elementary school-age children who surround him during their own carefree ride through the neighborhood. But when the movie goes too broad, which it often does—when it makes the same observations about black America that John Singleton and the Hughes Brothers were making in the ’90s—it feels more redundant than revelatory.

All Day and a Night started streaming on Netflix on May 1, 2020.