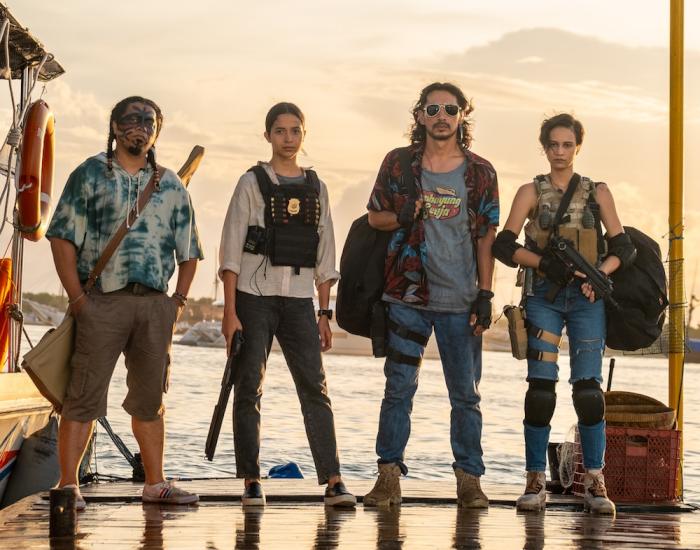 Review: 'The Big 4' Is The Other Must-See Movie On Netflix This Month

Yeah, yeah: Glass Onion is finally out on Netflix, it’s already their #1-ranked English-language film globally for the week, and it’s spawned its own staggeringly unnecessary Online Discourse. Don’t get me wrong, though. I ain’t mad at it! It’s all been a blast! But if you’re still on vacation, and you’re looking for another awesome movie to curl up on the couch with as the clock winds down on this holiday season, well — Netflix still has you covered.

This week, sitting pretty in the #1 spot over on their non-English language movies list is a sprawling Indonesian action-comedy called The Big 4. It’s part Tarantino, part Three Stooges, refreshingly original, and 100% heart. For some of you, though, all I need to say is that it hails from director Timo Tjahjanto, who previously helmed what is probably one of — if not THE — best action films of the last decade, The Night Comes For Us. For the rest of you, let me see if I can explain this blood-soaked little oddball that I enjoyed so thoroughly.

The Big 4 is a group of adoptive siblings, raised by their father figure to be do-gooder assassins of a sort. Picture a set of squabbling Robin Hoods in the underworld, or really — picture The A-Team only more dysfunctional. The film opens with the group infiltrating and subsequently demolishing a black market organ trafficking ring in order to free the children who were being held captive, and it’s the sort of sequence that sets the tone for the entire movie: An inventively choreographed massacre with charming banter. There’s the decoy, Pelor (Kristo Immanuel), who has been captured alongside the kids. There’s Alpha (Lutesha), the explosives expert undercover as a nurse. Jenggo (Arie Kriting) is the quirky sharpshooter stationed on a rooftop outside, and finally, there’s the big brother of the group, Topan (Abimana Aryasatya), who does a straight-up Mission: Impossible-style face-tearing reveal to signal the fight has begun. If the rumors are true that Netflix asked Tjahjanto to deliver a more family-friendly flick, then this sequence shoots that expectation down in a burst of fine red mist (alongside dozens of hired goons).

That opening is a great way to showcase the team, but it’s also the last time we’ll see them working together for a while. Their father reveals that he’s going to retire from killing in order to spend more time with his blood daughter, Dina (Putri Marino) — who happens to know nothing about her dad’s work with The Big 4, partially due to the fact that she walks on the right side of the law as a police officer. When their dad is subsequently killed by a mysterious knife-wielding assailant, Dina becomes obsessed with solving the crime while Topan and the others decide to live out their father’s dream of moving to the fictional tropical paradise of Bersi Island and leaving their own killing days behind.

Three years go by as the siblings settle into their own independent lives in hiding while Dina fails to make any progress in her revenge, until one day she finds a photo of her father she’s never seen before — a photo of him on Bersi alongside four little kids she doesn’t know. Our heroes, as children! Since she hasn’t been able to make sense of his death, Dina decides to try and make sense of the side of her father’s life she never knew, so she heads to Bersi looking for answers… only to discover Topan running the inn. Unfortunately, Dina isn’t alone: A whole miniature army of assassins, led by the suspiciously knife-proficient, wannabe-Mexican Antonio Sandoval (Marthino Lio), follow in her wake, looking for the whereabouts of The Big 4.

The Big 4 is a fun change of tone from Tjahjanto’s other action or horror films, a sort of Stephen Chow-esque swerve into the absurd. The effort may be less polished than The Night Comes For Us, though that’s to be expected at what was reportedly a much smaller budget — and with no martial artists of the caliber of Iko Uwais or Joe Taslim to anchor the cast, it’s even more impressive that the action sequences are as inventive as they are. Instead, the cast he’s hired is there to bring pure charisma to the proceedings, and in that respect, they do not miss. The characters themselves subtly sidestep the expectations we’d normally have of their roles — no femme fatale bombshells, noble heroes, or tactical geniuses in the lot, just a bunch of delightfully shabby weirdos who pull the jobs off with nothing more than duct tape and attitude. One of my favorite details is the fact that Alpha has Tourette Syndrome, though it’s never acknowledged in any way during the movie. It’s just a part of her character, a small part, one that’s nothing compared to her nerves of steel or skills as a weapon builder. Most of the charm, however, comes from Topan — or rather, from actor Abimana Aryasatya, who absolutely deserves to be a huge deal. He’s got that thing that George Clooney showed off in all his work with the Coen Brothers, where he’s still just an absolute smoke show but underneath it all, he’s actually hysterically funny and a natural character actor.

I’ll admit, the plotting of the film is a little wonky if you think too hard. Like why is Sandoval following Dina now? Has his employer been hunting for The Big 4 this whole time, or did they just happen to kick their search into gear after three years as well? Luckily the script, co-written by Tjahjanto and Johanna Wattimena, doesn’t leave an opportunity for you to get distracted by those petty little questions, as Dina and Topan set about reuniting the team, revealing the secrets of the family business, falling a little bit in love, and taking down whole truckloads of hired goons. The runtime borders on the absurd; The Big 4 is a 90-minute story that inexplicably plays out across 2 hours and 21 minutes, but I didn’t care a bit. Sure, it could have been tightened, but at the expense of what? Less explosions? Less banter? No thanks — all that bombastic frippery is what makes the movie so much fun! Instead of looking at my watch in concern, I was just happy to stay in that world as long as I could — and it seems we may get to return, if Tjahjanto’s plans for a trilogy pan out (and if he doesn’t get too distracted making that Train To Busan remake for James Wan).

So if you’re in the mood for a funny, scrappy, and nasty flick that you definitely shouldn’t show the kids, give The Big 4 a shot. Stylish and vicious action movies are a dime a dozen in Hollywood, but I can’t think of one that delivered as much genuine, heartfelt entertainment and pure spectacle as this one. Bullet Train could never.

The Big 4 is streaming now on Netflix.