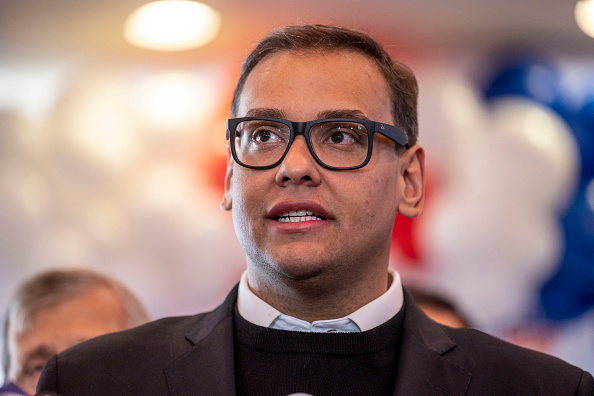 Because I know that all of our readers turned off the Internet while Pajiba was on vacation — except when you posted your Pajiba 10 nominations — and follow no other news sources, here’s what you missed over the long weekend:

— George Santos, the newly elected Republican Congressman from New York, admitted that he lied about everything, except the part about being Jewish, because he never said he was Jewish.

“I never claimed to be Jewish,” Santos said. “I am Catholic. Because I learned my maternal family had a Jewish background I said I was ‘Jew-ish.’”

The important thing here is that George Santos is not going to resign. He may be a fraud who built his political campaign on a foundation of lies, but who among us hasn’t made told a few lies? Santos says he will serve out his term. I’m sure that Republicans will love having that distraction in Congress while they’re trying to engineer bad-faith investigations of Hunter Biden. The big open question is where did Santos get the $700,000 he loaned his political campaign if, in fact, he was broke-ass and living with his sister?

Republicans may try to push him out through ethics investigations, but won’t that be rich? They keep Marjorie Taylor Greene, Lauren Boebert, and Matt Gaetz (despite the latter’s sex-trafficking allegations), but they push out the gay guy? Wow, Republicans! Democrats, meanwhile, are calling for Santos’ resignation.

— Elsewhere, Ben Shapiro took time out of his holiday weekend not having sex with his wife to sh*t on Rian Johnson’s Glass Onion, with the worst movie take ever on Twitter. Here’s what he had to say (and there are spoilers). I’m going to transcribe his tweets (and keep the typos, because I’m a dick):

I regret to inform you that “Glass Onion” is actively bad. I will discuss first the actual writing of the movie followed by the politics of it. Both suck. SPOILERS follow.

First, the writing. The first half of the movie is a complete misdirect and a waste of time. We only find out about the actual murder we’re supposed to investigate full one hour and ten minutes into the film, as well as an entirely new backstory (Miles never invited Blanc, and Andi has a twin sister masquerading as her). We’re actively deceived by the writer.

Why the misdirect? Because the story itself in the purest form of incredible laziness. It relies on not one, not two, but three bad writing tropes: an identical twin, a comprehensive journal, and a moron of a murderer.

You can write your way out of literally any scenario given an identical twin (which removes the need for linear coherence), a comprehensive journal (which explains everything) and a moron for a murder (which removes the necessity for plot logic). So instead, we get an hour of wasted time, because we have to make up for the fact that the murderer is perfectly obvious from moment one.

Rian Johnson actually knows this. That’s why by the end, he is telling the audience via Blanc that everything Miles Bron did is dumb (read: the ENTIRE PLOT OF THE FILM). This is the lazy writer’s way out: you know what you’re written is bad, so you just say it’s bad, and hey, look, now you’re clever and cynical …

Now, to the politics. Rian Johnson’s politics is as lazy as his writing. His take on the universe is that Elon Musk is a bad and stupid man, and that anyone who likes him - in media, politics, or tech - is being paid off by him. This is an incredibly stupid theory, since Musk is one of the most successful entrepreneurs in human history (how many rockets has Johnson launched lately?), and it’s a foolish conspiracy theory to boot.

How to explain his dumb theory? Bad writing, of course! Johnson comes up with a fake partner who is the ACKSHUAL smart person Miles/Musk cheated by bribing people. What about all the people who like Musk? They’re dumb and corrupt, too (which means you need no logic for them, so more bad writing!). This means that all Miles’ friends/supporters are still “sucking the golden teat” for Miles/Musk because he keeps signing them checks.

But any of them could, at any time, burn down Miles/Musk and reap massive benefits. Literally any of them. Duke would become, overnight, the biggest host in the world for uncovering the conspiracy of silence. Birdie would immediately become a famous social justice warrior, wiping out any Malaysian sweatshop problems; Claire would become president; Peg or Whiskey would become famous; Lionel would become a virtuous whistleblower.

But in Johnson’s bizarro-world, taking down the most powerful and rich person in the world is something nobody would consider. Weird, since he just made a $40 million movie trying to do just that.

Which brings us to the final irony: Rian Johnson is being paid $100 million to make two of these movies. So his is a rich, famous person writing stupid mysteries pretending to be smart. HE IS MILES, not Blanc. That’s the dirty secret

In sum: Misdirection, the thing that every mystery writer ever has engaged in is “stupid,” and Elon Musk is the real victim, and how dare Johnson — who makes a lot of money as a successful director — punch down at the richest man in the world.

— I don’t want to spend too much time on this, but this headline (and the accompanying photograph) is appalling for obvious reasons, and Twitter is taking note (Politico really is trash).

Politico is trash. As I keep telling you. Absolutely garbage. Daily. https://t.co/HpIG795Ej9

— Finally, Dmitry Medvedev — basically the second highest ranking Russian official — tweeted a wild series of predictions for 2023 that includes: the rise of the Fourth Reich in Germany, which will break out into a war with France; Britain will rejoin the EU; Northern Ireland will join the Republican of Ireland; a Civil war will break out in the United States and California and Texas will become independent countries (with Texas joining Mexico); and Elon Musk will win the Presidential election of the Republican states.

“Epic thread!!” Elon Musk tweeted in response (before saying that he was joking, five hours later). I’m sure it’s unrelated, but Tesla’s stock has dropped another 8 points last I looked this morning to around $115. It was at $400 around this time last year. (This drop has less to do with Musk and more to do with the production at Tesla’s Shanghai factory, which is currently shut down for COVID and will run at a reduced rate in January).