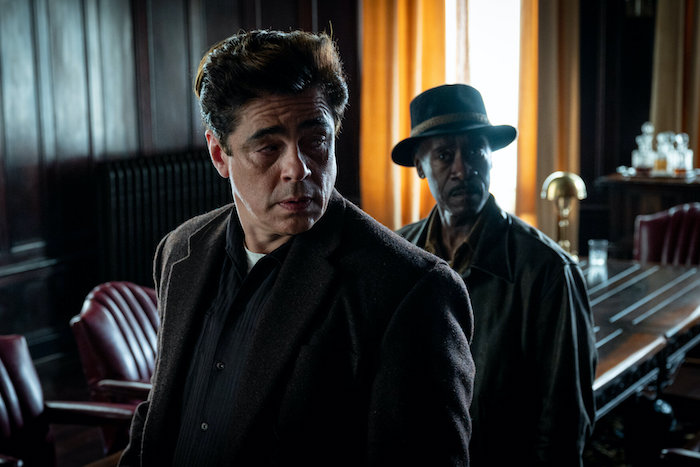 Now on HBO Max: Steven Soderbergh's 'No Sudden Move' Could Have Used Some 'Ocean's Eleven' Flavor

Director Steven Soderbergh is a master of the modern crime caper from Ocean’s Eleven to Logan Lucky. Yet his latest A-list ensemble heist flick, No Sudden Move, is decidedly heavier than his previous expeditions. In spite of its July release, the film is about as far from a summer vibe as one can imagine, from its muted, autumnal color palette to the rather staid dramatic approach it takes throughout.

No Sudden Move is set in 1954 Detroit, a gentrifying city fraught with racial tensions as both car companies and crime organizations struggle for dominance. The film centers around Curt (Don Cheadle), newly released from prison and desperate to make some cash. He accepts a suspiciously vague, armed robbery gig from the menacing Mr. Jones (Brendan Fraser). For a nifty $5000, he agrees to “babysit” the wife and kids of a mid-level pencil pusher while an important document is pilfered from the home office. The job pairs him with fellow hired hand Ronald Russo (Benicio del Toro), who is crusty and more than a little bit racist. No one involved in the break-in fully understands what’s going on or why (and neither does the audience). When the gig goes sideways, Curt and Ronald are stuck together in an “enemy of my enemy is my friend” sort of way as they try to figure out what exactly it is they’ve gotten themselves into, and how to get out of it while coming out on top. It’s far too subtle of a drama to go the full odd couple buddy comedy. At their closest, they’re still best described as reluctant work acquaintances.

The cast is stellar and top-tier, as is usual for a Soderbergh project. (Plus, there’s a delightful uncredited cameo that I shall leave unnamed to preserve the surprise.) In terms of actually establishing characters, though, the story arguably relies too much on star power. I care about Curt because he’s played by the eminently likable Don Cheadle. An attempt to give him more of a backstory complete with the One Who Got Away is—to put it bluntly—a bit pathetic. It’s a similar story elsewhere. The performances are great, but the casting is used as a crutch, the script does little to try to convince the viewer to care or invest in the characters or their woes.

The female characters are particularly short-changed. There’s exactly one conversation between two women that feels like it was put there because someone advised screenwriter Ed Solomon the Bechdel test was cool with the kids or something. It’s a flimsy band-aid that doesn’t do anything to address the fundamental issue that literally all the women with any amount of screen time are sidelined in the exact same way. Sure, it’s set in the 50s. I get it. All I ask is that at least one woman gets a plotline that doesn’t boil down to worrying her pearls and sighing over her boyfriend and/or husband. It really doesn’t feel like that big of an ask and yet, here we are yet again. (There is an eleventh-hour twist towards this end, but it’s far too little, far too late.)

Soderbergh’s heist films tend to stick pretty close to the characters, letting the audience go on the same ride. Arguably, this one takes things too far. For most of the runtime, the story is so opaque it becomes a question of not just “what’s going on?” but “why should I care?” When the stakes finally are revealed, they’re compelling, and the intended intersectional commentary is commendable, but the efficacy of holding off on these reveals so long is questionable.

There are so many “things” and “thems” and “thats,” with characters and motivations remaining relatively unclear, that fully understanding most conversations in No Sudden Move would require extensive notes from the opening seconds. Once upon a time, Billy Wilder gave some screenwriting advice that recommended letting audiences add up two plus two. Solomon’s attitude here seems to be to let viewers do algebra. Unfortunately, viewers aren’t given too much to really incentivize putting in all that work. There are so many moments in which characters make comments about forgetting people’s names and such that the confusion of it all feels intentional.

Theoretically, it’s an interesting angle, but actually sitting down and watching the carousel of confusion, it’s an approach that gets rather tiring. Eventually, it feels self-defeating. Featuring no less than two crime organizations, car companies, the cops, and the various ulterior motives and machinations of individuals players, No Sudden Move is a doozy to follow. Twists and turns are great, but infinitely more effective if you can actually follow what’s twisting and turning. When all the cards are all finally laid out it’s less of an “a-ha” moment than a “sure, if you say so” sort of deal.

It’s as if in grappling with weighty issues as corruption and systemic racism, Soderbergh feels that this story cannot also be earnestly entertaining. That’s a shame. It’s a heist flick—have a little fun. The third act tries to add a little bit more pizzazz in a few places, but the handful of moments that feature a more mischievous touch only make the dour tone that overwhelms the rest of it feel like an even more befuddling choice.

Narratively, No Sudden Move is overstuffed and under spiced, featuring a jazzy score that often feels at odds with the overwhelmingly muted and at times downright gloomy story. Ultimately, though, it’s still a well-shot, well-acted, star-studded revisionist noir crime drama. There are far worse ways to spend two hours, even if the film does feel like it falls a good bit short of its full potential.

No Sudden Move is currently streaming on HBO Max.

← The 'Succession' Season 3 Teaser is a Whole-Ass Meal | [Spoilers] 'The Tomorrow War' Review: Kyle Reese Did Not Die for This Crap →