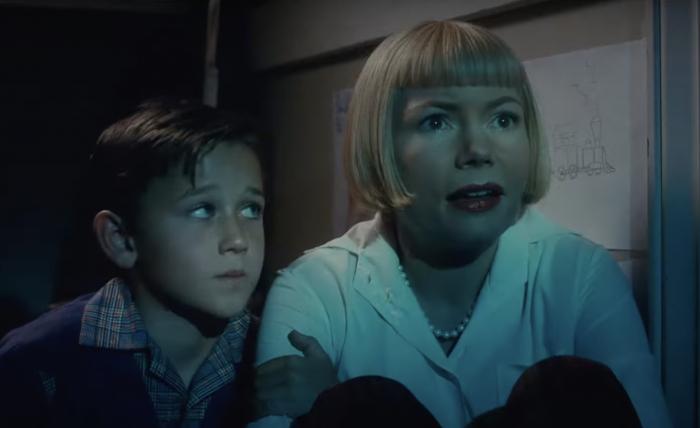 As the legendary chanteuse of misery Tammy Wynette put it once upon a time, “I love you both and this will be pure H E double L for me … Oh, I wish that we could stop this D-I-V-O-R-C-E.” But two years before Tammy turned the pain of marital disillusionment into art, another very real divorce was happening in California—one that would reverberate even further, and create even more far-reaching art—when director Steven Spielberg’s parents divorced. Has any artist since Tammy so mythologized the dissolution of a marriage? Even Bergman strayed! But Spielberg’s loosely fictionalized autobiographical film The Fabelmans, while lovingly acted and shot and fine indeed, is the most straightforward scratch at a scab he’s been openly picking at for decades.

Think upon all of the films Spielberg’s made over the years where kids sit around a kitchen table and watch their parents or vice versa. Roy Neary making mashed potato mountains in Close Encounters; Sheriff Brody and his wee-est one echoing back his actions in that infamously ad-libbed wonder of a scene in Jaws. Through cultural osmosis we’ve already become intimately familiar with the childhood of our most famous and recognizable director. His nostalgic lens has re-shaped our own remembrances; his sentimental propaganda molded the cultural consciousness itself, just like those mashed potatoes. We’ve been the putty in his hands, and he keeps playing out the same scenes trying to get them just right.

So in some ways The Fabelmans feels redundant. No Spielberg’s never told this exact story, but also yes, yes he has. Look at Melinda Dillon and Dee Wallace and Lorraine Gary and tell me you don’t see Michelle Williams, here brushing away the space-aliens and fish-tales to get at that kernel that’s always been there buried underneath; that platonic ideal of a complicated but fiercely loving (and blonde, ever blonde) mother whose independent streak is like a live-wire humming through every background scene of every blockbuster the king of Hollywood has churned out in his five-decade career.

But Steve, one supposes, has earned himself some front-facing hagiography at this point after all he’s given to us. And The Fabelmans, it must be pointed out, is actually still a fictionalized re-telling. It is (dare I say) a Fable, Man. Spielberg’s own name, translating as it does to “games” (spiel) and “mountains” (berg), just doesn’t have quite the same explicit poetry to it I guess. And changing the family name frees him up from the constraints of a strict recital—he can venture off on tangents to his familiar tune. Sure, his own mother Leah “Lee Lee” Adler (who passed in 2017) aka “the lady with the Peter Pan haircut” (as she was known to her neighbors and friends) might have studied music at a conservatory before marriage and children put a damper on her personal dreams. But did the clacking of her acrylic nails on the piano keys actually, through a series of comic coincidences, lead her son to discover the creation of cinematic special effects? One imagines some artistic license involved there, roughly the size of Bruce the Shark.

So Williams, with that weird little Peter Pan bob fully intact, is here named Mitzi, and she is married to Burt (a gloriously low-key Paul Dano), a computer engineer on the vanguard of there being such things as “computer engineers.” They seem deeply and playfully infatuated with each other early on, although their warring preternatural instincts—between Art and Science, between Love and Commerce—will soon roar its way not just into their marriage, but also into the main conflict of their son and his work itself. Who else, we wonder, could make the films Jurassic Park and Schindler’s List in the very same year but a man whose parents bickered about monkey vaccines over the dining room table?

Speilberg’s stand-in in The Fabelmans is named Sammy, and he’s played first by the big-eyed Mateo Zoryon Francis-DeFord as the little boy who sees his first movie—the circus-themed 1953 Best Picture winner The Greatest Show on Earth — which would light his imagination on fire. Before you can whisper “bar mitzvah” Sammy’s got a movie camera and is crashing his toy trains; by the time he’s a teenager and he’s now being played by Gabriel Labelle (in an absolute star-making performance) the cameras have gotten bigger and so have the play-sets. He’s now enlisting his sisters to get kidnapped by black-hatted cowboys and his best buddies to get their own Private Ryans on with blood-spattered war reenactments. And he’s discovering the best thing of all—the sweet sweet distance that a camera puts between you and your subjects.

That’ll come in handy as Sammy begins to spy his mother’s deep unhappiness, weeds sprouting up between the floorboards before his lens. And it all culminates in a scene that will surely be featured in all of Spielberg’s life tribute clip-reels, where Michelle Williams acts the living hell out of the discovery that her son has seen straight into her deepest secrets, splicing together a story she hadn’t even been able to tell herself yet. It’s a whopper, containing one of those long close-ups that truly make The Movies go round.

Those are the moments where The Fabelmans shines brightest—it’s a film that wanders, one might even say meanders, back and forth between memory and movie-making, all until that bridge between becomes imperceptible. What once took steps becomes simply a turn of face; a simple, irrevocable slide of eye down behind a viewfinder, forever. Watching our greatest cinematic sentimentalist wrestle with the thorny ways he’s wrestled reality into more manageable and digestible entertainments is riveting stuff, when it busts through to the front of the busy picture anyway.

Besides all of the terrific Michelle Williams stuff (which is truly a feast unto itself) the scene in The Fabelmans that I keep coming back to is the one where one of Sammy’s bullies finds himself dizzied and dismayed by the way Sammy’s turned him into the heroic protagonist of the Senior class film he unspools on prom night—the dude takes his lionization like a bucket of pig’s blood, while even Sammy doesn’t understand what he’s done or why he’s done it. The way your own art can betray your fantasies, twist your allegiances, take you to places you didn’t see yourself going at the start—Spielberg knows that when you turn that camera on the symbiosis between subject and object becomes explosive. Ain’t nobody escaping intact.

When Judd Hirsch blows into the film for five ecstatic minutes as Sammy’s ex-circus great-uncle he is given the film’s most basic truth in dialogue-form when he says, “Art will give you crowns in heaven and laurels on Earth, but also it will tear your heart out. Art is no game!” The Fabelmans, for all its playfulness, ain’t playing around. It’s the decoder ring for fifty years of images from the preeminent image-maker in mainstream Hollywood entertainment and it thankfully blessedly knows that. And it doesn’t back down.


Image sources (in order of posting): Universal,Amblin Entertainment,
Most Viewed