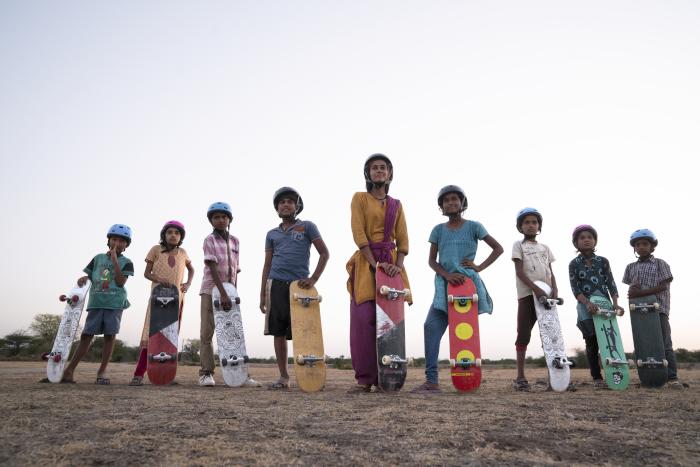 Review: ‘Skater Girl’ is a Coming-of-Age Fantasy that Puts Being Inspirational Above All Else

“Girl does [insert unexpected thing here], grows into herself” has produced a tidy series of fulfilling films, among them Bend It Like Beckham, 10 Things I Hate About You, Real Women Have Curves, The Half of It, Lady Bird, Hala, and Plan B. What makes judging a film in this subgenre tricky, though, is determining whether the movie is doing enough by just telling a story like this in the first place, or, if there is quality and effectiveness to the filmmaking outside of just, “Hey, a movie about a female character!” Such is the conundrum of Skater Girl.

The film from writer and director Manjari Makijany hits the right notes. A teenage girl who is tied down by the traditionalist and conservative mentality of her family, her hometown, and her culture is introduced to a new world through skateboarding. She feels free when she skateboards. Slow-motion scenes capture her exuberance and self-confidence. She shares some tender, thoughtful moments with her crush, and becomes friends with an adult, who serves as a sort of champion and mentor.

All of that stuff is nice and pleasant. It might particularly resonate with younger viewers looking for the kind of individuality and liberty provided by finding a hobby or sport that becomes your passion. But Skater Girl also feels a bit like a first draft. It’s a film that has the right component parts but that doesn’t exactly coalesce into something greater than those parts. The inspirational message is there, the debut performance from lead actress Rachel Saanchita Gupta is there. The accuracy regarding the caste system in India and how it maintains the disenfranchisement and oppression of the lower classes is there.

Ultimately, though, Skater Girl feels like a film divided. Divided by a focus on two female characters, rather than the titular one. Divided by an emphasis more on skateboarding itself than on how it transforms the primary character. And divided by fantasy and realism, and on indecision regarding whether a film like this requires a happy ending or a true ending. Skater Girl builds such crushing, overwhelming obstacles for Prerna (Gupta) that the way the film ends can’t help but feel incomplete. Crowd-pleasing, absolutely. But reflective of the interior world that this film builds or the exterior one in which we live? That seems less sure.

Skater Girl is set in the village of Khempur, India, which is small, rural, and divided into upper and lower castes. While the upper-caste families are comfortable and hold higher-level jobs in the school, police force, factory, and local government, lower-class families like Prerna’s struggle to get by. Her parents both work, so Prerna stopped attending school to take care of the house and her younger brother Ankush (Shafin Patel), and sell peanuts at the market. Prerna is living a small life that her parents and her town are making increasingly smaller.

Until the London-born, half-Indian Jessica (Amrit Maghera) arrives in town. Jessica is a source of fascination and mystery to Prerna, Ankush, and the other children in the village. She speaks Hindi, which they didn’t expect. She’s bold and confident, which they’re unaccustomed to, and her tablet and cellphone provide them with a connection to the world outside the village, which they haven’t seen. She quickly befriends Prerna, buying her a new uniform and textbook so that the girl can go back to school. Prerna’s parents are wary: Why is this stranger being so nice to their daughter? Then Jessica’s friend Erick (Jonathan Readwin), who teaches English nearby, comes by on his skateboard, captures the kids’ imagination, and shakes up the whole village.

Skateboarding mania takes over Khempur! At its center is Prerna, who takes immediately to the mobility and adventure that a skateboard provides. She practices in secret against her parents’ wishes, especially her father (“Why are you playing with things meant for boys? … Cook some lentils”). She asks her daredevilish brother for tips. She starts a friendship with her classmate Subodh (Vinayak Gupta), although he’s in the upper caste and any kind of relationship they might have is forbidden by both sides. But then Skater Girl sort of sidelines Prerna to follow Jessica’s mission to build a skatepark in the village, an undertaking that resulted in the real construction of Desert Dolphin Skatepark for the film. The free park in Khempur now attracts hundreds of skaters each day and is helping build a skateboarding culture in India, and that is admirable and impactful.

The problem, though, is that narrative choice means Skater Girl isn’t entirely about Prerna. Instead, Jessica gets a backstory about her reason for being in Khempur; Jessica moves through the upper-caste world and creates various alliances; Jessica takes the role of the Westernized savior of the children of this small town. All of that would be fine if Prerna were more of a character than just “oppressed girl”—if we knew more of her own interests, dreams, or thoughts. A generous reading of this would be that Skater Girl is suggesting that girls, teens, and young women in this position and in these kinds of circumstances don’t have the luxury, or the time, to consider their futures. There is probably unfortunate truth to that, and in fact, there is a scene where Prerna basically says just that to Jessica.

Does that mean these same girls, teens, and young women wouldn’t have personalities of their own? I think of Made in Bangladesh, and how that film built out its protagonist while also positing her as someone whose life is changed by her decision to start advocating for herself. Skater Girl needed a bit more of that in its consideration of Prerna, especially because it does so for Jessica. It needed a bit more of how skateboarding could save Prerna’s life, rather than having other people repeat that sentiment for her. And it needed more of an answer for the question, “If we don’t give these girls a chance, who will? … Maybe we’ll see a better tomorrow,” dialogue from a scene Jessica holds with a potential benefactor for the skatepark. For girls and tweens, Skater Girl might be a push toward following their dreams, but the end result is a movie that feels more driven by delivering good intentions than telling a fully realized story.

Skater Girl is streaming on Netflix as of June 11.