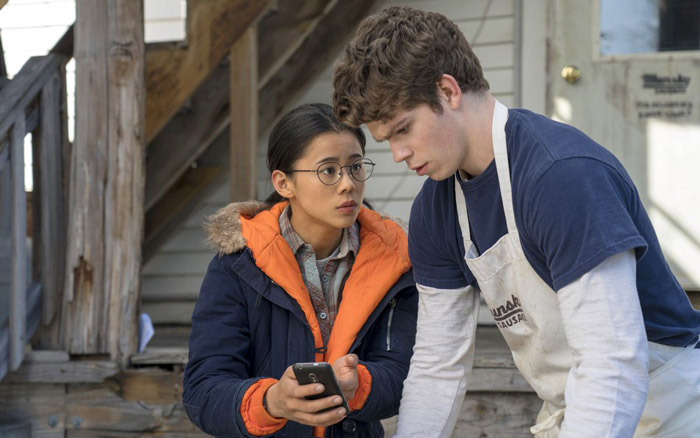 Review: Netflix's 'The Half Of It' Is Rom-Com Excellence And Then…No! What? STOP IT!

Halfway through The Half of It, I was happily writing the headline for my review in my head: Netflix’s Greatest Original Rom-Com Isn’t A Rom-Com Really! I was absolutely giddy with that rush you get from truly terrific teen comedies, crafted with insight and care by a filmmaker who’s not talking down to her audience. Then came a kiss, which takes the final act into a direction that had me drop-jawed and groaning.

The Half of It is a modern-day retelling of Edmond Rostand’s 1897 play Cyrano de Bergerac, but with a gender-bent and queer twist. 16 years after wowing us with her feature debut Saving Face, writer/director Alice Wu offers another tale of a Chinese-American lesbian struggling with romance and self-love. Leah Lewis stars as Ellie Chu, our Cyrano. Intelligent and introverted, Ellie’s main role at her high school is as a paper-penner for pay. Need an essay on Plato? That’ll be $20. She uses this cash to help her widowed father make ends meet, as he struggles to get promotions or even pay bills over the phone in a community that’s perplexed by his accent.

On many levels, Wu paints Ellie as an outsider. Her classmates call her “the Chinese girl” and mock her last name. She’s a bookish tomboy in a high school flooded with vapid femme blondes. She’s an atheist who plays piano for local church masses. Plus, she’s a lesbian. Not that anyone knows that, no one is close enough to Ellie to know much about her at all. Then comes Paul Munsky (Daniel Diemer), a dopey but good-hearted classmate who signs his letters:

Paul approaches Ellie to write a love letter to his crush, Aster Flores (a beguiling Alexxis Lemire), who of course is strikingly beautiful and charming. Plus, this pretty girl has depth, expressing her frustration of being pigeonholed or treated as a commodity because of her looks and popularity. She’s intelligent and daring, liking Wim Wenders, graffiti, and skinny-dipping. However, she’s also dating the default match for the prettiest girl in school: an arrogant, handsome jerk, named Trig Carson (the solidly hilarious Wolfgang Novogratz). So with the odds of high school hierarchy against them, Ellie teams up with Paul to write letters and text messages to woo the girl. Things get complicated as the unlikely alliance grows close and Ellie reveals she’s got a crush of her own, on Aster.

At the start, Ellie warns us through voiceover, “This is not a love story—or not one where anyone gets what they want.” From there, Wu delights in setting up her whip-smart heroine and the goofy buffoon who is destined to be her bestie. Lewis brings a nuanced pathos to this guarded girl, who snarks and side-eyes to keep more rejection and heartache away. Then comes Diemer, with a mop of curly hair and the open-mouthed grin of an eager golden retriever. The repeated clash of scowl to smile, cynicism to hopefulness makes for a lot of fun as the pair plot a romance and lightly stalk Aster to transform Paul into her dream guy. Yet, the best bits of The Half of It are scenes where Ellie lets Paul into her world.

Wu reveals so much in deceptively simple visuals. In one scene, Ellie invites Paul to her house for dinner. Previous two-shots showed her and her father’s routine: seated in their living room in side-by-side armchairs, facing the TV—never each other—eating quietly and stoically while watching black-and-white movies. Then comes Paul. He’s seated on the floor, a bowl in his hand, and that big grin on his face as if he’s never seen Charlie Chaplin before. Ellie’s face changes, she’s not stoic or happy. She’s unnerved. This is different, which is alarming. Later, Wu will repeat this once more when Paul comes to cook for the Chus. They are in their chairs, he is now behind them, coming from the kitchen with his invention: taco-sausage. He hunches down, inverting the triangle of the second scene. This time, everyone is smiling. Their elation is contagious.

Moments like this made me squeal with absolute delight. Wu has a skill for crafting character, and they are on glorious display in The Half of It…at least for the first half. The dynamic duo of Paul and Ellie are juggling a double-act they can’t keep up. Aster is bound to realize something is up. Paul is bound to realize his new friend is crushing on his dream girl. Feelings will be hurt. However, how it goes down feels abrupt and bizarre after all the thoughtful character development that Wu has established.

Spoilers below for The Half of It.

Then comes Paul, kissing Ellie. Flustered, she pushes him away. Aster walks in on them at this worst possible moment and storms off. All that is pretty clichéd rom-com/teen drama stuff. Fine. But then Paul realizes what Ellie can’t say. He responds gravely, “You like Aster? It’s a sin. You’re going to hell.” Then, he walks out on her.

This low-point scene knocked the wind out of me, but not for the reasons it intends. This felt like a sucker-punch, not because what Paul is saying is a betrayal to their friendship (though it is), and not because this kind of rejection is something a lot of queer kids face in religious communities (though it is). It bothered me chiefly because there’s no setup for Paul behaving in this homophobic way. Wu treats such his condemnation as a given, considering he’s a dopey dude in a small religious town. It’s a stereotyping that the film has been working hard to push against, showing all the ways that Paul is more than the dumb jock we’d assume.

Haven’t we hit a point in queer culture where not every coming out story demands a damnation moment? Yes, that’s a real experience for many. However, this is a rom-com (of sorts), offering a fantasy of love. Why is it that even in this realm of love and fantasy we still must have the gay character berated for being gay? Without setting up Paul’s potential reaction, this doesn’t feel earned as much as it feels like a checkmark for some outdated “How to make a gay movie” to-do list.

This scene could have played well without that particular outburst. Paul felt rejected for kissing Ellie. He felt betrayed because she liked Aster and never said anything. That’s enough of a blow to their friendship to establish a low point. Tonally, Paul’s comments take the film into a jarringly darker space. Yet, Wu doesn’t deal with it on those terms. What follows is a kooky romantic misunderstanding and a comedic climax at the church, which feels sweet but frustratingly scattershot. Here comes a series of speeches in which previously tongue-tied characters now become elegant orators in a way that only happens in screenplays!

End of spoilers for The Half of It.

Wu delivers a blow without enough time or depth to allow her audience to recover before she barrels into a happy (enough) ending. The Half of It is nonetheless a solidly engaging story of love, friendship, and self-discovery. However, as it stretches to also be about faith and homophobia, it fumbles, leading to an ending more cluttered than cathartic. Still, Lewis is extraordinary as Ellie, giving rom-com fans a heroine to root for who is sharp, funny, and not as cynical as she’d like to imagine. Diemer is a d*mned delight as Paul Munsky, whose goofy smile speaks volumes and made me laugh every time. Still, Wu has made something warm and wonderful. Check it out. Then seek out Saving Face for a charming and unapologetically queer double-feature.

The Half of It is now on Netflix 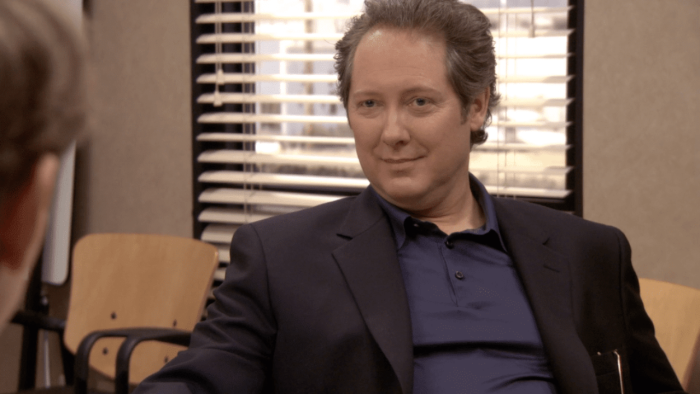 In Andy Greene's Book on 'The Office,' the Cast And Crew Very Politely Throw James Spader Under the Bus