Rarely have I seen a documentary as full of love as Beastie Boys Story (a proper review of which will be up soon on the site; these are just my musings!). The format distills the love Beastie Boys fans have for the group: The documentary was filmed over a few days in April 2019 at Brooklyn’s picturesque King’s Theatre, and begins with on-the-street interviews with fans, and the appreciative crowd is cut to often for effect during the doc itself. Everyone here is extremely pumped, and they are fully on board with the journey Mike Diamond (Mike D) and Adam Horovitz (Ad-Rock) are taking them upon.

Mike D and Ad-Rock are speaking to that crowd, to director Spike Jonze, and to us (there is no fourth wall), and their stories are interspersed with photos, videos, and other behind-the-scenes footage of their careers. And for the most part, the story they want to tell is one of outward love for their late third member, Adam Yauch (MCA), who died of cancer in 2012. I have rarely seen admiration as pure as what Mike D and Ad-Rock demonstrate for MCA, consistently and powerfully, all throughout Beastie Boys Story. There are so many photos here of Yauch, interview snippets, retellings of stories directly about him or involving something he did, either as part of the group or outside of it. Yauch was, to hear Mike and Adam tell it, the moral center the group found when they realized “(You Gotta) Fight for Your Right (To Party!)” wasn’t what they wanted to do with the rest of their lives. When the charm of being asshole clowns wore off. When they realized they were no longer in on the joke; they were it. 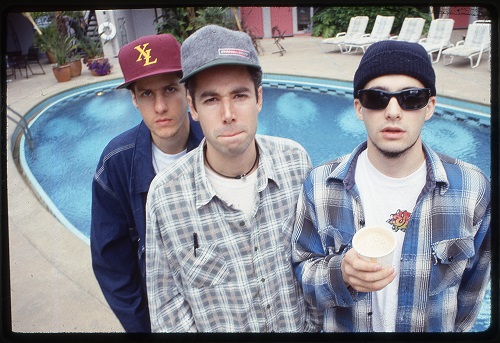 All of that maturity, it seems, came from Yauch, and he is the guiding light of the Beastie Boys Story, its lighthouse, its North Star. I remember growing up listening to the Beastie Boys and liking MCA the most because he was politically active, because he cared about international issues (remember the Tibetan Freedom Concert?), and because, superficially, I found him the most attractive. Sometimes it feels easy to romanticize people once they’re gone, but Mike and Adam pay homage to their friend and brother by sharing all that he cared about. By including photos from his world travels, by acknowledging that he basically quit the band in search of something deeper, by making clear that his grasp of what the group could do was what moved them forward. And the most clear example of this is from “Sure Shot,” a verse that MCA wrote and delivered that was so straightforward and that I can still recite, beat for beat, to this day:

“I want to say a little something that’s long overdue
The disrespect to women has got to be through
To all the mothers and the sisters and the wives and friends
I want to offer my love and respect to the end.”

How phenomenally about-face was this for a group that not only a decade earlier had leaned into the whims of their shitty frat-boy fans with “Girls”?

Uh, pretty phenomenal! Mike D and Ad-Rock talk about how nonchalantly MCA delivered that verse, but how steadfast he was in its messaging: that the Beastie Boys would no longer be a group who made the same mistakes, who flattened experiences other than their own, who primarily thought with their dicks. That’s admirable, and MCA’s leadership in this way certainly doesn’t dull the crush I still harbor. I mean! Look at the guy!

What I also thought about during Beastie Boys Story, though, is who gets the power to tell these stories, to reinvent themselves, to transform their images in this way. The Beastie Boys went from punk to rap, nearly immediately got a record deal, dropped the style of rap they were doing, secured another record deal, were able to reinvent their sound, and kept switching things up for decades to come. Who do we allow to say of their own career, “Yes, I did this one thing, but now I’m doing this whole other thing?” Who gets the freedom to decide they’re no longer the joke? You know the answer I’m building to here, and it starts with “M” and then the letter “E” and finally this other letter “N.”

That’s not to say Beastie Boys Story should be skipped. As a fan, I relished the doc for how thoroughly it recounts “three kids that met and became friends and did all kinds of crazy stuff together for over 30 years,” and Mike D and Ad-Rock have such great chemistry together, and I got legitimate joy out of watching them gently rib each other, shoot the shit, and choke up while talking about Yauch. I loved all that, and I love how much they love MCA. “‘What would Yauch do?’ is always on our minds,” they admit, and that’s about when I started tearing up. But what musicians right now have the flexibility to pursue a career this varied, and of this caliber? Could the music industry as it currently exists even support such an endeavor? What about the way we consume music today—are we open to adaptation in this same way? (I’m not talking about money here—this isn’t a question of monetary success, but of creative freedom.) There is something wistful about considering all that, and about considering who gets to shape their own narratives, and about what we lost when Adam Yauch died, and perhaps that’s more than what Beastie Boys Story intended to do, but it’s what I’m still thinking about.

← How Many Episodes Are Left of 'Riverdale' Season 4 After Production Shut Down? | Netflix's 'The Half Of It' Is Rom-Com Excellence And Then...No! What? STOP IT! [Spoilers] →