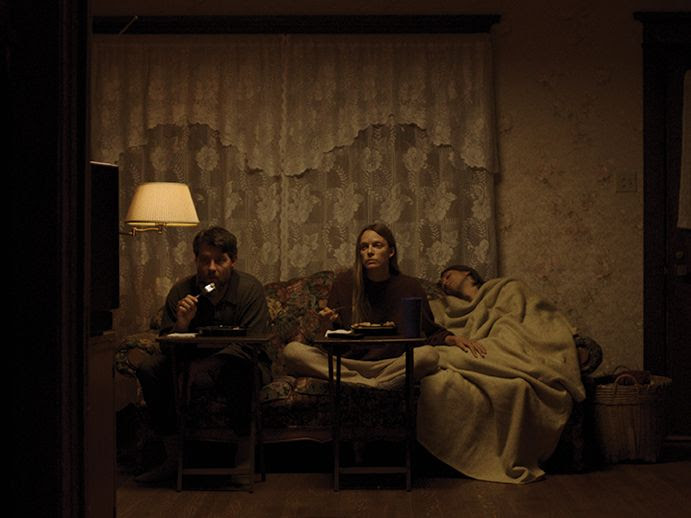 Now On Demand: Patrick Fugit Anchors The Often Suffocatingly Sad Vampire Tale 'My Heart Can't Beat Unless You Tell It To'

It took me twenty minutes of him being on-screen for me to recognize Patrick Fugit in Jonathan Cuartes’ shadow-drenched and deliberate vampire flick My Heart Can’t Beat Unless You Tell It To. I’ve seen Fugit in several things in the twenty years since he made his first impression in Cameron Crowe’s Almost Famous, but something about him here in this film now, with a lush beard and the metaphorical weight of imminent middle age working its way down from there, just refused to register. I’m sure those aforementioned shadows did their part. This is a brown and brooding film; all the better to tuck its half-seen horrors in a corner, down a hall, an unsettled presence diffusing all light.

The film might take its time letting us study its character’s faces and the fraught intricacies of their relationships, but it dispenses with its supernatural set-up with a brute quickness. Before five efficient minutes have passed we have watched Dwight (Fugit) bash in a drifter’s skull and lug the body home, where he and his sister Jessie (Ingrid Sophie Schram) strip and slice up the man and ready a quick bowl of blood for their bedridden brother Thomas (Owen Campbell), who immediately laps it up with breathless fervor. Most of the story from there on takes place at night since that’s when Thomas is awake. Beyond the blood and the darkness, Cuartes isn’t terribly interested in the specifics of Vampirism. Instead, My Heart Can’t Beat Unless You Tell It To is fully a dark fable about illness and the suffocating toll it can take on those loved ones who’ve been tasked with the care-taking.

There’s never anything offered in the way of backstory; there’s no clue how we got here or what happened to these three siblings’ parents. Indeed, I thought for a long while that Dwight and Jessie were Thomas’ parents. Like the revelation of Patrick Fugit himself, the film methodically reveals what it wants you to know or understand when it wants you to know and understand that thing, not a second before. But it’s not hard to see from the first that no one involved with this situation is happy about it. In his private moments, Dwight yanks on his beard like he’s tugging on a light switch, desperate to shut down, while Jessie reads feral in her need to stamp out every leak. If there’s a hint of fresh air she will sniff it, stuff a rag in it, and duct tape it over for good measure. Keeping the peace never seemed such a threat.

For his part Thomas, the blood-sucking monster, just comes off as a clueless and lonely kid. Besides the dribble of blood down his chin, he remains mostly unaware of the quite literal sacrifices his siblings are making in order to keep him alive. After he’s fed, he does manage to spread small moments of cheer into this cheerless vacuum. They smile, play the piano, sing karaoke, and celebrate an apparent constant state of Christmas. (That’s right folks, it’s technically another anti-Christmas Christmas Horror Movie for those annual lists.) But the disconnect between Campbell’s haggard look and Thomas’ adolescent behavior remains always unnerving. And Thomas’ natural desire to just do something normal once, to be a normal boy, will quickly become the family’s undoing, the tugged on thread that unravels everything Dwight and Jessie have mashed together into the shape of a somewhat raveled thing.

Beautifully acted and photographed My Heart Can’t Beat Unless You Tell It To does ask an awful lot of its audience, not just with its precise pace and obfuscation but emotionally, as its indifference to its own metaphorical trappings makes the what-it’s-about of what it’s about unceremoniously straightforward at times. Besides the occasional crimson torrent, it really does feel more like a movie about cancer than any Nosferatu, and it can be a real dark sit. You should probably go into this one only if you’re up to that challenge, but if you are it’s got an empathic soul buried under its blackened breathless lungs that might give you a good gasp or two.

Originally reviewed out out Tribeca Festival 2021, My Heart Can’t Beat Unless You Tell It To is in theaters and om digital and On Demand, as of June 25.