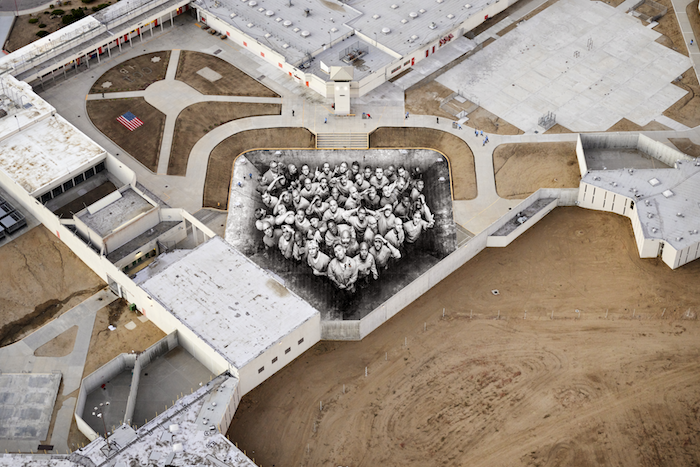 Tribeca Review: 'Paper and Glue' Presents a Heartwarming Manifesto on the Power of Art and Representation

“I’m open,” French photographer and street artist JR earnestly tells a roomful of maximum-security prison inmates at Tehachapi Supermax Prison in California. Known for the larger-than-life-size photo murals that he’s done around the world, he’s planning to do a giant mural of all the inmates in the prison yard, but he wants their input and blessing before moving forward. He lays out what his vision is for the project and asks for their thoughts. He addresses their questions candidly; if he’s at all nervous at any point, it never shows. He also, as always, wears his signature sunglasses to remain anonymous—perhaps the biggest anonymous voice in the street art world besides Banksy. Like most great artists, JR is something of an enigma, and a little bit of a paradox—the candidly open man who is iconic but unknown, hidden behind a pair of dark glasses. When speaking of his childhood he mentions being quite shy; it strikes me for the first time that maybe part of the appeal of the sunglasses is that remove the need for consistent eye contact.

Paper & Glue—JR’s second documentary after the delightful Faces, Places, co-directed by the legendary Agnès Varda—suggests that the late filmmaker had a sizable impact on her unlikely friend. Opening and closing with the street artist ruminating over quotes from Varda, who passed away in 2019, Paper & Glue is at least in part an homage. “My friend Agnès Varda believed that inside of each person is a landscape. I would say that within all landscapes, behind all walls, are people,” JR comments. The remarkable similarities and subtle but significant differences between the fundamental philosophies of these two great artists become all the clearer through watching this new documentary in which JR reflects on his career and some of his most remarkable projects to date.

At the US-Mexico border less than a year after Trump oozed his way into office with “build the wall” chants and being a general embodiment of white rage, JR drives the length of the fence looking for an ideal place to put an installment. He wants to thumb his nose at the US border patrol, but not get into more trouble than he can wriggle his way out of.

Unable to find an ideal existing structure, JR determines to build his own, a massive scaffolding three times the height of the border fence, to display an image of a Mexican toddler who lives within eyesight of the border peeking over the edge of his crib, blown up as big as Godzilla. The installment is a smashing success, drawing crowds of eager onlookers from both sides of the border. As the crowds gathered on either side, the photographer noticed something interesting going on—communication taking place across the fence, with strangers reaching through in order to photograph each other with the mural or take selfies together. He then decides to do a second border fence instillation—this time a floor mural spanning across the border itself. The installment becomes an event; scores of people on both sides of the border sitting down to enjoy some al fresco dining, chatting, and passing (technically illegal) tacos through the gaps in the fence.

The politics inherent in JR’s work is self-evident. He never describes his work in such terms, but the actual social impact of his work proves far more profound than many who openly promote their intentions as such. His murals take advantage of two human impulses that are more or less universal—the urge to take selfies with larger-than-life artworks and the desire to feel seen. His work spotlights and magnifies those who feel invisible, from prisoners to residents of the favelas (slums) of Brazil. JR’s installment brings visitors from all over to an area of Brazil almost universally avoided. One local resident, an older woman featured prominently in the murals, becomes a celebrity for a night, signing autographs for attendees of a gala celebrating the installment. “Someone noticed us,” she says in wonderment.

The “out of sight, out of mind” ability for the media and general public to become utterly desensitized to, and willfully ignorant of, the suffering of others has been put on particular display throughout the Covid-19 pandemic. For those struggling to find any remaining scrap of faith in humanity at large, Paper & Glue hits like a warm hug. Media can often be overly consumed with notions of its own importance. Documentaries or socially-minded narrative fiction won’t end racism or single-handedly change laws. Yet photography and film are uniquely capable of making people feel visible and significant.

JR’s work enables people to feel seen and admired, and he turns his lens towards those who feel the most invisible and maligned for singularly uplifting results.

Ahead of the film’s Tribeca Festival premiere, MSNBC has acquired distribution rights to Paper & Glue; the release date is yet to be announced.

← The Podcast Bubble Has Not Burst Yet, as Amazon Shells out $80m for 'Smartless' | The Pajiba June 2021 Book Recommendations Superpost! →