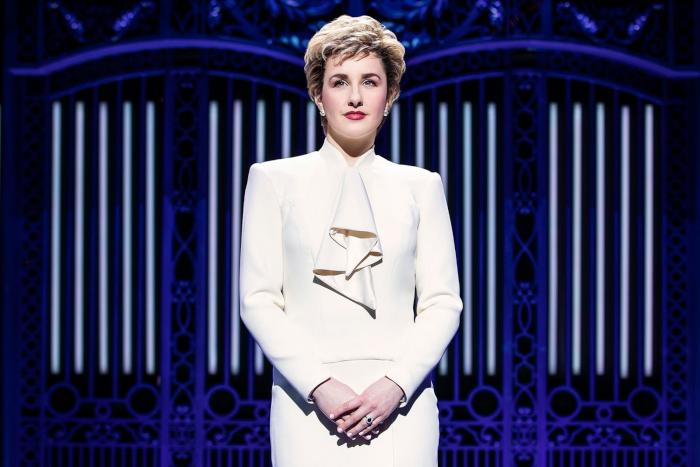 Review: Netflix Brings the Musical ‘Diana’ from Stage to Screen But Adds Nothing New to a Very Familiar Story

It’s a tale as old as time. The beautiful young woman meets the eligible prince. They marry after a whirlwind romance, and she becomes the most famous woman alive. Yet underneath the iconic exterior is the story of a fracturing heroine fighting an archaic establishment, the cruelty of the press, and the smothering expectations of a life she never truly asked for. But this time, there are songs!

Live theater was one of the biggest cultural casualties of the 2020 COVID lockdown, with Broadway turning the lights off for close to 18 months. While Broadway is now in the early stages of reopening, it’s clear that the world of theater still needs to find new ways to survive. Many companies offered live-streamed productions while places like the Met and the National Theater in London allowed YouTube premieres for filmed shows that were previously broadcast in cinemas. It wasn’t quite the same thing, obviously, but it certainly helped to scratch a certain itch. Pro-shots of Broadway shows don’t tend to happen while the production in question is still popular and can be milked for a few more years of premium sale tickets. It’s a testament to the now-ubiquitous nature of Hamilton that it earned a Disney+ recording while still in its cultural and economic prime. It’s a lifeline for those of us thousands of miles and dollars away from Broadway’s glow, and a business model it would do well for many other companies to replicate.

Still, it’s kind of weird to see Diana: The Musical get this treatment when it’s yet to open on Broadway and out-of-town previews weren’t exactly rapturously received. It’s true that Diana is receiving something of a pop culture revival this year thanks to season four of The Crown and the upcoming Pablo Larrain drama Spencer. Diana’s certainly a brand name, for better or worse, but a musical of her life remains a hard sell, which may explain why producers were keen to bank on some Netflix promo for the upcoming Broadway show, which opens at the Longacre Theater next month.

Diana: The Musical on Netflix comes to us via Christopher Ashley, the Tony-winning director behind Come from Away, which also recently received a strongly reviewed filmed version, now on Apple TV+. That take benefitted from allowing the camera to participate in the inviting communal nature of the story, with plenty of close-ups and vibrant movement that felt decidedly un-stagey. Diana doesn’t have that same verve, partly because the source material doesn’t leave much room for it. It’s stagnant stuff, shot in an unmemorable fashion, much like the songs themselves.

The music comes to us via David Bryan, the keyboardist for Bon Jovi. Yes, really. Alongside the lyricist and book writer Joe DiPietro, he wrote the Tony winner Memphis and cult show The Toxic Avenger, both of which feel like much better fits for his brand of ’80s rock. Honestly, this show could have seriously benefitted from some Andrew Lloyd Webber-esque shredding guitars and sing-my-angel-of-music cheese. Indeed, a lot of the show feels like a failed ’80s high-concept show that Cameron McIntosh would have demanded they add a helicopter to. When you have this level of shoulder pads in your musical, there’s no excuse not to camp it up a little, but Diana is achingly earnest. It’s understandable given the subject matter and how close to people’s hearts Diana remains. Nobody’s interested in doing a hit job here, but the lyrics are so obvious and lacking in thematic and character depth that too often it feels like you’re being sung the Wikipedia entry on her life. Every detail is spelled out, leaving the narrative feeling like a join-the-dots game for kids. It’s also thuddingly American. Diana says she’s a kindergarten teacher and the monarchy is always referred to as an English one, not British. Every accent is clipped to the nines in a way that suggests parody more than lived human beings. There are times where I couldn’t help but wonder if the show would be better had all the actors just given into their inner drag queen.

All of this makes the job of playing these very familiar faces kind of a thankless task for the actors. As Diana, Jeanna de Waal has a tough arch to nail, and she does what she can, but there’s no room for anything remotely subtle or prickly. Judy Kaye, a true Broadway legend. seems to be having fun as the Queen but suffers from the same problem everyone else does: They just say/sing what they’re thinking, which makes you wonder why they even need to bother acting. She at least gets a double role, also playing Barbara Cartland, the romance author who was Diana’s favorite writer as well as her haughty step-grandfather. Plus, the costumes are gorgeous. De Waal gets to wear some rather spot-on recreations of Diana’s iconic fashion.

As an advert for the show, and an implicit invitation to pay to see it in person, I’m not sure Diana succeeds. It’s got spectacle, sure, but there’s nothing here that you won’t see done better on The Crown. You won’t learn anything new about Diana or her struggles, nor will you feel as entertained as you would want to be by this concept. DiPetro and Bryan are talking a fine tightrope here between bombastic entertainment worth your $120 and wide-eyed respectability that will do the name of Britain’s Queen of Hearts justice. Would that this show had some of Sondheim’s mischievous darkness or the emotional entanglements of Jason Robert Brown.

It’s not impossible to blend high concept with layered creativity, but if your entire show is about how there was more to Diana than the glossy surface, it feels a bit insulting to present a show with the depth of a puddle. You can be The Phantom of the Opera or you can be Follies but choose wisely and know your limits. As an easy-going Broadway show to see when you can’t get Hamilton tickets, I imagine there are better alternatives, especially when classic stage stalwarts like Wicked and Chicago are still running. Even die-hard Anglophiles may want to pass on Diana: The Musical and wait for Kristen Stewart’s interpretation. Diana: The Musical isn’t even much of a curiosity. It’s too safe for that.


← Rudy Giuliani Pleads His Case On 'The Late Show With Stephen Colbert' | Review: Melissa McCarthy's 'The Starling' is Very Bad →