Youths whose childhoods were robbed from them are the focus of two of the year’s best films, both from Spanish-speaking creators who evoke real-world violence in their depictions of orphans struggling to survive amid violence, abandonment, and desperation. Tigers Are Not Afraid from Mexican writer-director Issa López references the country’s rampant drug wars in her fairy tale about a young girl searching for her missing mother; as she begins to encounter increasingly supernatural elements, Estrella (Paola Lara) wonders about the reality-bending power of wishes. In Alejandro Landes’s Monos, a group of teens live on a remote Latin American mountaintop, in an unnamed country, where they receive missives from the mysterious Organization and watch over an American hostage. Their lives, like Estrella’s, have been consumed by violence — but they are being prepared to give it right back to the adults they are being told wronged them. Each film is gripping, immersive, and surreal, with varying levels of bleakness and hope, and what they are telling us about the performance of childhood feels like a warning. 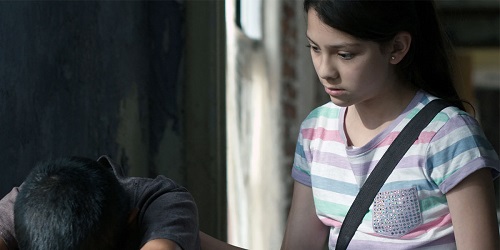 Tigers Are Not Afraid begins in a classroom with a group of children being instructed by their teacher to concoct a fairy tale, so young Estrella (Lara) turns to the figure of the tiger — a mythological symbol for strength and abundance in areas of Mexico. Estrella is a child who has grown up around persistent violence (in fact, a shooting during this teacher’s lesson will result in class being canceled until further notice), and her vision of the tiger isn’t passive protection, but active vengeance: “Tigers never forget. They’re hunters. Their eyes can see in the dark. They have fangs, to break bones. Tigers are not afraid.”

But Estrella’s lofty boasts can’t change her reality: That her mother is missing, disappeared from her home. Estrella has nowhere to go, no one to turn to; more and more people leave her neighborhood every day. So she wishes for her mother to come back — and with that desire, things start getting weird. A line of blood seems to track Estrella wherever she goes. She hears her mother’s voice, but as if through a veil, a whisper from another world. Black, decaying fingers reach for her in the night. A shadow passes through the apartment, when Estrella knows she is alone. Terrified, Estrella flees, eventually meeting up with a group of orphan boys who first tried to steal from her and soon become her only friends. 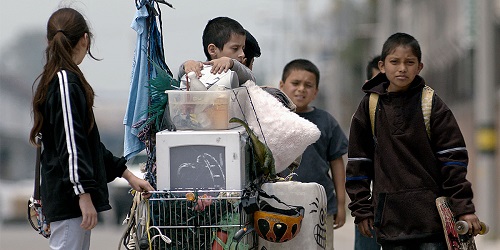 The group’s ringleader is Shine (Juan Ramón López), a young boy in possession of a stolen phone and gun, lifted from a drunk drug dealer. He commands the other boys to eat their vegetables. He waves the gun around like it means something. He keeps messing with the phone. And he wants nothing to do with Estrella. Shine is a child pretending to be an adult, drawing the tiger symbol everywhere he can as a means of protection, but his group of lost boys have no room for a Wendy Darling. Unless she can kill someone for them — a test that Shine fully expects Estrella will fail.

Tigers Are Not Afraid is unrelenting in the darkness of its material, but López merges the genre conventions of fairy tales and ghost stories with the genuinely dizzying emotions of childhood; her work here has more than a little in common with Guillermo del Toro’s The Devil’s Backbone, and that’s not a bad thing. Graffiti is alive; a tiger growls and leaps from wall to wall, an imagined image come to life. A miniature black dragon flies out from a cellphone case; a snake on a gun’s handle slithers into existence; an empty furnace room is revealed to be full of ghosts. The line between the real and the supernatural is very thin in Tigers Are Not Afraid, and that’s a clever way to demonstrate the razor’s edge on which these children live — and how quickly their lives can be snuffed out.

The rapidity with which a normal life can turn abnormal is explored with more extremism in Monos (“monkeys” in Spanish), which begins with a scene of organized confusion: blindfolded teens playing soccer on top of a mountain in an unnamed Latin American country. The location is gorgeous — rushing wind, fluffy clouds, endless blue sky, verdant moss — and is in stark contrast to the children themselves, who are being trained to be rebels, captors, killers. They only have first names: Wolf (Julian Giraldo), the group’s alpha male leader; his chosen romantic partner, Lady (Karen Castrillón); the bombastic Bigfoot (Moisés Arias, next-level threatening); the quietly observant Rambo (Sofia Buenaventura). They carry guns, they perform drills, they’re coached by the Messenger (Wilson Salazar), who directs them in training exercises so strenuous that they often throw up. Did these kids sign up to be part of the mysterious Organization, which dictates their movements, or were they forced into it as younger children? How did they come to be responsible for the captive Doctora (Julianne Nicholson), who they force to make hostage videos, and who desperately begs them for mercy? Do they believe in what the Organization wants? Does what the Organization wants even matter?

Filmmaker Landes keeps much of the narrative details of Monos quite opaque, instead focusing on the shifting power dynamics of this adolescent group, which plays out like a fusion of Lord of the Flies and Apocalypse Now. Romantic connections amid the group wax and wane. Certain members grab for more power, to varying levels of success. As the group travels down from the mountaintop to the jungle below, the clarity of their purpose becomes complicated, muddied; there’s a stifling quality to the second half of the film that reflects the lush humidity the teens are moving through. Everything is simultaneously staggeringly beautiful (the cinematography from Jasper Wolf is exceptional) and relentlessly disorienting (the score from Mica Levi, who previously worked on Under the Skin, is aggressive and eerie in equal measure), and when I saw the film a few weeks ago, I counted more than 20 walkouts. Monos might be divisive, but it’s also one of the most engrossing films I’ve seen all year, a movie so devoted to its message and so committed to building a world regimented into different kinds of brutality that I couldn’t help but be enthralled.

And much like Tigers Are Not Afraid positions Shine’s character as a boy performing adulthood, believing that his masculine posturing and braggadocio will save him from the violence that has ravaged his childhood, Monos does something similar with Rambo. A young soldier whose wavering commitment to the Organization’s cause makes them the closest thing the film has to a protagonist, Rambo’s gender is never explicitly revealed during the film. The character is only once referenced by Wolf as a “brother,” and during a sex scene, we see a clothed Rambo perform, but not receive, oral sex. Yet I think there is something added to Monos if you realize that the character is played by a young woman. Rambo is performing the image of a devoted young soldier, and their growing disillusionment is tied to that performance — to the idea that someone whose youth has been stripped from them will adapt the mannerisms of those very abusers in order to survive. It’s a sobering suggestion that adds layers of complexity to the trauma and crisis explored in both Tigers Are Not Afraid and Monos, two of the most unforgettable films of the year.

Tigers Are Not Afraid is available on the streaming service Shudder. Monos is playing in limited release around the U.S.

← Jordan Peterson Has a New Book and It Can't Possibly Be Real | What Happened to Chester and Yuko on AMC's 'The Terror: Infamy'? →