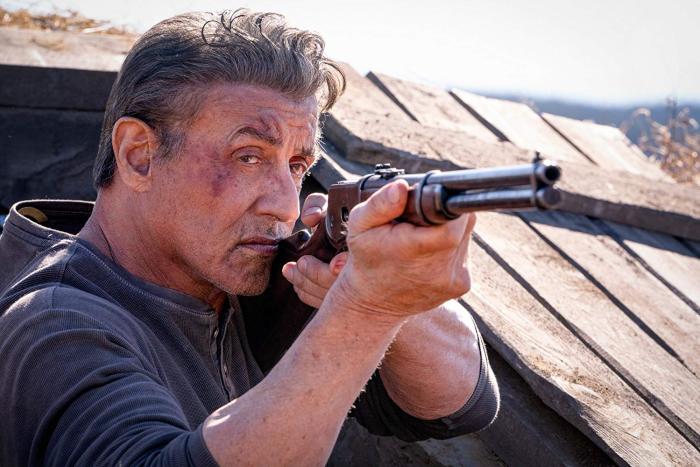 Review: The Best Thing About 'Rambo: Last Blood' Is The Promise Of The Word 'Last' In The Title

I’m gonna be up-front with y’all: This review will NOT be “spoiler free.” My “spoiler free” review of Rambo: Last Blood would just be live video footage of me banging my head against a wall until I knocked myself into blissful unconsciousness in the hopes that I could forget every detail of Rambo: Last Blood. And since Pajiba has yet to pivot to video, here I am, forced to use my words in an effort to cleanse my brain rather than, like, embracing whatever oblivion has to offer instead. If you want a quick review with precious little detail, then let me assure that this is not a very good movie. It’s not even a very good Rambo movie — though it does offer up a third act Rambo-certified Booby-Trap-apalooza designed to satisfy the rabid Rambo fanbase. The majority of the film, however, is pure vitriol and cynicism. This is a movie that bends over backwards to prove that Mexicans Are Bad (while ripping off a Mexican film, I might add). This is a movie that strains itself forcing the famously non-verbose John Rambo to utter unconvincing speeches about how painful it is to watch innocence be destroyed, and there’s no coming back from that kind of PAIN, like having your HEART TORN OUT, and thus REVENGE IS THE ONLY ANSWER. This is a movie that is so high on its own mythology, it doesn’t see how badly it has betrayed its own legacy.

The only positive thing I can say is that the title promises this will be the “last” Rambo movie. And that, at the very least, is a good thing.

So, you’ve been warned. From here on out it’s ALL SPOILERS because the film’s greatest flaws are in the details, and I’ve got editorial approval to go full-“F*ck It.” Ready?

A young woman disappears in a nightclub in Mexico, and her loved one gets dangerously mixed up with a local cartel just to find her. This is the basic set up for… well, for the 2011 Mexican film Miss Bala, which was recently remade as a vehicle starring Gina Rodriguez, but it is ALSO the framework for the first two acts of Last Blood. The film picks up about a decade after the previous Rambo installment (2008’s, uh, Rambo), with John Rambo (Sylvester Stallone, duh) whiling away his days on his family’s horse ranch in Arizona alongside his niece, Gabrielle (Yvette Monreal), and friend/housekeeper, Maria (Adriana Barraza). Things to note: John has basically been a father to Gabrielle, who lost her mother (John’s sister) to disease years ago, and whose father (WHO WAS MEXICAN, FYI) was abusive before he finally abandoned them. Gabrielle is about to head to college, leaving John behind. Also, John has built a very conspicuous set of murder nice, normal tunnels underneath the ranch in order to work out his lingering paranoia. Tunnels chock full of Rambo memorabilia, basically.

Gabrielle has a friend who moved to Mexico and now claims she’s located Gabrielle’s father, so Gabrielle disobey’s John’s orders and drives down to confront the man in person — despite John and Maria both asserting that both the friend AND the father are Bad People. And sure enough, Gabrielle’s father tells her in no uncertain terms that he never wanted anything to do with her and is happy he left, and then her friend takes her to a night club to make her feel better but ALSO to sell her to a cartel for use as a drug puppet prostitute. But wait! It gets more grim! John drives to Mexico to track Gabrielle down, only to get his ass handed to him by a group of 30 thugs because y’all, Rambo got old! Worse, he pisses off the brothers who lead the cartel and they decide to make an example of him AND Gabrielle… by carving their faces up and pumping Gabrielle full of heroin (it’s unclear if she’s raped, but it’s pretty much implied). John is saved by a local woman named Carmen (Paz Vega), who has been investigating the cartel since they kidnapped and killed her sister. After patching John up, she gives him enough clues for him to finally rescue Gabrielle (after a much-anticipated bloodbath). Yay? Oh no, not yay — because Gabrielle goddamn dies in John’s truck as he drives her back to Arizona.

Now, I need to stop for a second because there are a few things I should point out. First, John insists on taking his niece home INSTEAD OF IMMEDIATELY TO A HOSPITAL. Or, OK, maybe he doesn’t trust the hospitals in Mexico to not have connections to the cartel. But he still could have taken her back to Carmen, who clearly has a doctor friend on standby because the dude sewed up John’s face. John had options, is the point. Gabrielle did not have to die. However, John’s unnecessary backroads journey back to the U.S. did give him a chance to drive his truck STRAIGHT THROUGH the flimsy barbed wire fence protecting our border, and how ELSE was this movie supposed to telegraph how desperately we oughta just put a wall there, hmm?

So John buries his dead niece, then releases his horses and prepares for a — wait for it — MEXICAN STANDOFF, get it? He digs some more tunnels, makes a bunch of booby traps, and then drives back to Mexico to behead one of the brothers. Why only one? Because the goal is to lure the other brother to visit John’s murder ranch, obviously. John Rambo isn’t just going to kill all the bad guys in some tunnel-less Mexican hellhole, oh no. John Rambo knows what the people want. And speaking of tunnels, that’s how the remaining cartel flunkies cross the border to reach John’s trap.

The last half hour of the movie is what you’ve been waiting for: a full-on murder spree. There are cave-ins, and sticks with spikes, and explosions. And John lets several chances to kills Bro #2 go by, because he’s saving him for last… so he can RIP HIS HEART OUT. Get it? Because that’s the pain John is feeling! And then Rambo hauls his bloodied old carcass up onto the porch to muse about the things he left in ‘Nam and the things he lost at home. Cue credits (which are filled with images from the OTHER Rambo movies, just to remind you what a goddamn hero this guy used to be).

Now, you may be wondering why I think this movie is racist. After all, John’s niece is half-Mexican and he loved her! He lived with Maria, who maybe wasn’t just his housekeeper (she totally was)! Sure, that’s fine. Plenty of racists will defend themselves by pointing out how they have plenty of friends of *insert minority group — they just hate the bad ones! The problem with Rambo: Last Blood is that none of it needed to involve Mexico at all. There are bad fathers and murderous drug-dealing pimps in America, too. The movie goes to great lengths to draw parallels with the film that started this franchise, First Blood. It’s in the title. It’s in the booby traps. But the thing is, First Blood was never about any foreign enemies. It was about a veteran facing hostility from the very people he’d joined the military to defend. There was no them, there was only us. It was the most personal of the films because it took place at home — and it was the one movie where John tried his hardest to defend himself without killing. When he sets up the traps in the woods while the sheriffs hunt him down? He goes for non-lethal damage. After that, the character of Rambo spent several movies getting convinced to involve himself in international bloodbaths, but this last chapter brought him home once again. So what’s the message, then? Why is all THIS the way Stallone himself (who co-wrote the story and the screenplay!) wanted to bookend this franchise? It’s not a movie that explores the lingering effects of PTSD, though that becomes a convenient excuse for the tunnels. There is no political message (aside from general xenophobia) behind his actions. It’s not a movie about justice — it’s about revenge. It’s a movie about a man who has been tortured becoming a torturer. You could make an argument that the John Wick movies glamorize revenge sprees, but there is a nobility in the way Wick is constantly trying to remove himself from the game, only to get pulled back in. In the old Rambo mode, Wick never draws first blood. And while Rambo too isn’t the instigator of this mess, he also is no hero. What happened to his niece is terrible, but he isn’t pulled back into anything. He isn’t the hunted but the hunter. He isn’t defending himself — he’s engineering a massacre. In pursuing his revenge, he becomes a monster. And the movie hopes that fridging a young girl in the darkest, most cynical way possible will be enough to have you cheering for him every step of the way.

And you know what? People did cheer at my screening. So f*ck me, I guess. ‘MURICA! You kill our girls, we’ll drag you into our crazy goddamn murder tunnels!