Theodore Melfi directed Hidden Figures and St. Vincent, neither of which are bad films, so I’m not sure what happened with The Starling, a movie so bad I assumed that Melissa McCarthy’s husband, Ben Falcone, must have written it. (He did not. That honor goes to Matt Harris). It’s a movie that takes the worst thing that can happen to a person — losing a child — and tries to turn it into a sentimental comedy about grief. It’s almost impossible to quantify in how many ways The Starling misses the mark. It’s bad, the sort of film that feels like it was written circa Garden State and rejected at the time because the only people screaming into an abyss were those who read the screenplay.

Spoilers, but there’s a scene late in the film in which Chris O’Dowd’s character, Jack — who is being institutionalized after a suicide attempt — opts against taking his own life because of all the blue Snoballs (those disgusting Hostess cupcake concoctions) that his wife Lilly (Melissa McCarthy) sent him. This is what passes for one of those Very Big Moments in the film, a breakthrough that brings Jack back from the ledge. Snoballs. 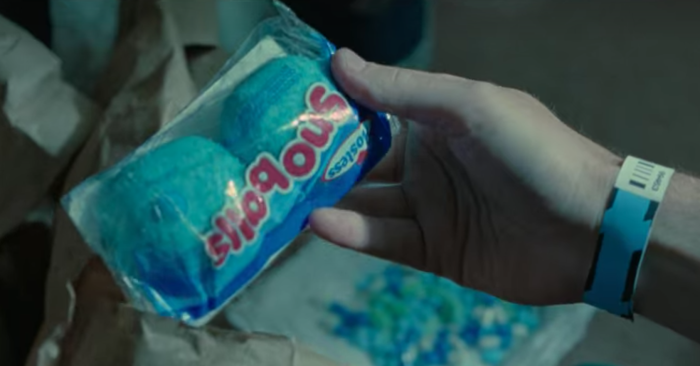 The Starling is what would happen if you put a middle-aged Manic Pixie Dream Girl into a brown paper bag with Beaches and a pile of sh*t and stomped on it until your heel was bruised and the pavement below was smeared in unearned tears and fecal matter. McCarthy is Lilly, a grocery store worker (hello The Good Girl influence!) still grieving a year after she and Jack lost their baby to SIDS. Lilly is so distracted by her own thoughts that she’s become preoccupied with a Snoball display in her store, where her boss — played by Timothy Olyphant (who sadly only has two or three short scenes) — gives her sh*t because her head is not in the game.

The reasons are myriad, but mostly because her husband checked himself into a mental health facility and checked out of their marriage. Lilly is left to pick up the pieces by herself. As she and her husband grow ever-more distant, Lilly seeks therapy from Dr. Larry Fine (Kevin Kline), an esteemed psychologist who gave up his career to be a veterinarian because of the emotional toll talking to people took on him. Fine rejects Lilly as a patient because he’s a vet, and there would otherwise be no other reason for their paths to intersect but for the fact there’s a territorial starling in Lilly’s garden that won’t stop harassing her.

Lilly seeks Fine’s counsel about the bird, and he ultimately offers advice on her marriage. The starling, meanwhile, is a Metaphor with which the movie bludgeons us. The bird is her marriage! After she nearly kills it, she has to nurse it back to health because, you see, starlings are social birds who are not meant to live alone. Part of nursing her marriage back to health also entails calling her husband and berating him for selfishly trying to take his own life, which I’m pretty sure is on page 1 of the “What not to do when someone tries to end their life” manual. But there’s a lot of, “But what about me?! I lost our daughter, too, so you’re not allowed to be depressed because I’m not” from Lilly. Surprisingly, none of that gets through to Jack.

But the blue Snoballs do. When they do, Jack and Lilly can live happily ever after, in their garden, wearing football helmets so that the starling can’t attack their faces. Because it’s a comedy, you see. About suicide and losing a child.

It’s remarkable how good Melissa McCarthy, Chris O’Dowd, and Kevin Kline, in particular, are in an otherwise terrible movie, but great acting can only do so much. You cannot put lipstick on a bird metaphor. It cannot erase bad writing or dumb metaphors or blue Snoballs. At best, it can turn a guffaw into an eye roll, and The Starling is exactly that: One mawkish, headache-inducing eye roll, and genuinely one of the worst movies of 2021.


← Review: Netflix Brings the Musical 'Diana' from Stage to Screen But Adds Nothing New | Review: 'No Time to Die' Ends Daniel Craig's Bond Era with a Bang that Hits Like a Whimper →