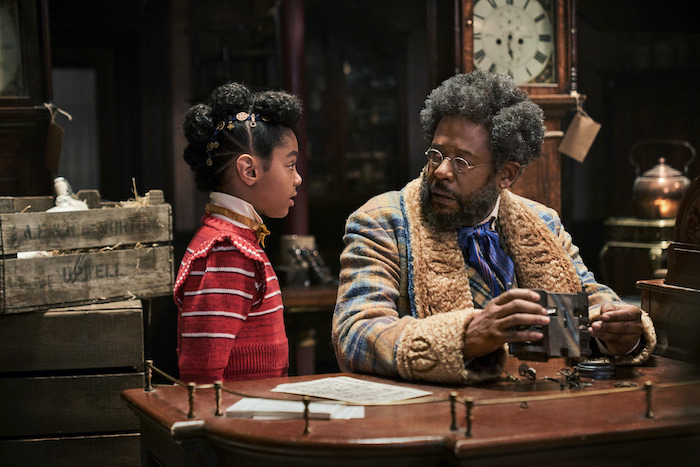 Review: Let ‘Jingle Jangle: A Christmas Journey’ Take You on a Festive Trip, But Leave Your Brain Behind

Following up Almost Christmas and El Camino Christmas with new Netflix film Jingle Jangle: A Christmas Journey, if writer-director David E. Talbert has qualms about being pigeonholed in the holiday movie market, he doesn’t show it. In his latest festive outing—this time featuring elaborate song and dance numbers—Talbert takes the Victorian-ish setting ubiquitous to the subgenre of Christmas movies, which includes all five million adaptations of A Christmas Carol and colleagues, to spin an original tale that fits so well into the standards and tropes of the aforementioned subgenre that despite being newly released there was a part of my brain stubbornly insisting all the way through that wait, I’ve definitely seen this before, haven’t I?

Only I haven’t, because while I might’ve grown up going to Black Nativity and Christmas Carol stage productions with colorblind casting, the name of the movie-making game has long been that “for general audiences” means casting decisions should default white. Jingle Jangle’s only real innovation is to bank on the ability of non-Black audiences to connect to a predominantly Black cast (with token white guy Hugh Bonneville as friendly banker Mr. Delacroix) the way non-white audiences have connected to white casts since the earliest days of cinema. There’s no sociopolitical statement being made here or a deeper message about inclusion and diversity. It’s just a cheesy Christmas movie with all the bells and whistles. It’s pretty great.

Using the classic storytime framing device beloved by family films everywhere, a perfectly coiffed and elegant grandmother (Phylicia Rashad) sits down her grandkids to tell them a story she’s never told them before. Why? Because she hadn’t felt like it before, so just shut your gobs and listen, kiddos.

We then jump to the story of young Jeronicus Jangle (Justin Cornwell), a rags-to-riches toymaking mogul and family man following the formula of the myth of Thomas Edison. That is the wholesome apple pie, biopic-starring-Spencer-Tracy version, not the actual guy who was, for lack of a better term, a trash person. (Jeronicus even later gains a young devotee named Edison, in case the archetype he’s meant to emulate is in any way unclear.)

After several years on the up and up and with business at his Jangles and Things toy store booming, Jeronicus has just invented his greatest creation yet—a sentient matador doll named Don Juan Diego (voiced by Ricky Martin). The toy exhibits all the schmoozy narcissism one would expect from a doll named Don Juan, and it turns out his superiority complex isn’t all too hyped by the prospect of becoming one of mass-produced multitudes.

While Jeronicus celebrates his breakthrough with wife Joanne (Sharon Rose) and daughter Jessica (Diaana Babnicova), an inventor-in-training, Don Juan convinces Jeronicus’ disgruntled apprentice Gustafson (Miles Barrow) to steal his employer’s notebooks and the various trade secrets therein. As patents and copyright law apparently don’t exist in the Victorian-ish alternate universe where this story takes place, Jeronicus is fresh out of luck, and finds his life going rapidly downhill as Gustafson’s toymaking empire threatens to force Jangles and Things out of business. To add insult to injury, wife Joanne soon succumbs to Disney movie mom disease. Jeronicus decides he’s best off alone in his sadness and sends daughter Jessica away so he can focus on cursing the injustices of fate full-time and turning Jangles and Things into a lost cause of a pawn shop.

After many years of no contact, adult Jessica (Anika Noni Rose), sends her own daughter Journey (get it, because she goes on a journey?) to Jeronicus for the holidays, an aspiring STEM-type herself hoping to heal the family rifts through a combination of festive cheer and a shared love of equations.

The bitter, world-weary Jeronicus (Forest Whitaker, finally) is the sort of persnickety grouch this particular flavor of Christmas movie can’t function without, and Whitaker clearly has fun with the role, even if his evolution from stage one Scrooge to stage five Scrooge definitely feels more random than earned.

Let’s get this straight—Jingle Jangle isn’t re-inventing the wheel. Could it be better? Definitely. Besides one high-energy musical number, Keegan-Michael Key as the older Gustafson feels like a bit of a wasted opportunity, as does Anika Noni Rose, who’s brought in to belt out a musical number later in the film (“Make it Work”) but gets barely any screen time considering how significant the father-daughter bond between herself and Jeronicus is supposed to be in the film.

Just as there are places where it feels a bit of a shame the film didn’t do more, there are other places where it could have done decidedly less, particularly with regards to its insistence on playing the widowed Ms. Johnston’s (Lisa Davina Phillip’s) romantic interest in Jeronicus for cheap laughs. Ha ha ha, joke about how her husband must be happy he’s escaped her in the afterlife, so funny. There’s entertainingly corny and then there’s just tired, and Jingle Jangle doesn’t always seem to distinguish between the two. But the film stays on the right side of things enough to not be dragged down by its missteps and makes for sufficiently engaging, family-friendly holiday fun celebrating the magic of the square root of possible and other such joyful nonsense.

The songs are, overall, on the more generic side, although worse has admittedly been Oscar-nominated in recent memory. “If you stay willing to love just a little / It’ll hit you in the middle / Like pancakes on the griddle,” ranks among some of the more inspired songwriting on display here. Ultimately though, the musical numbers get the job done; an upbeat believe-in-yourself banger delivered by young Journey (impressive newcomer Madalen Mills) had me uplifted in spite of myself.

This film’s best feature by far is its visuals. Both the sets and the costumes display a delightfully sumptuous, unapologetically baroque “more is more” aesthetic that makes every scene a delight to look at even if there’s nothing really going on between the ears. It has the timeless, placeless retro-future vibe one might expect of steampunk, with men in cravats and tailcoats dancing around with a drone flitting around in the background, only it’s more like steampunk tossed in a blender with a rainbow and an Afrofuturistic taste for pattern mixing.

All in all, Jingle Jangle is a very shiny, intricately decorated bauble that’s quite possibly hollow in the middle. Yes, that’s right, it’s exactly like a Christmas ornament; it’s cheery and seasonal and will probably break into a bunch of pieces if you poke at it too hard, so I have no desire to do so because I’m not that much of a Grinch. Just enjoy the pretty costumes and the holiday cheer and Forest Whitaker singing (and not half bad either, particularly by recent movie musical standards), and give your brain the night off.

← 'The Mandalorian' Season 2, Chapter 11: The Frog Reunion Was the Most Adorable Moment | Irish Lad Gets Locked Out Of His Car By His Dog →