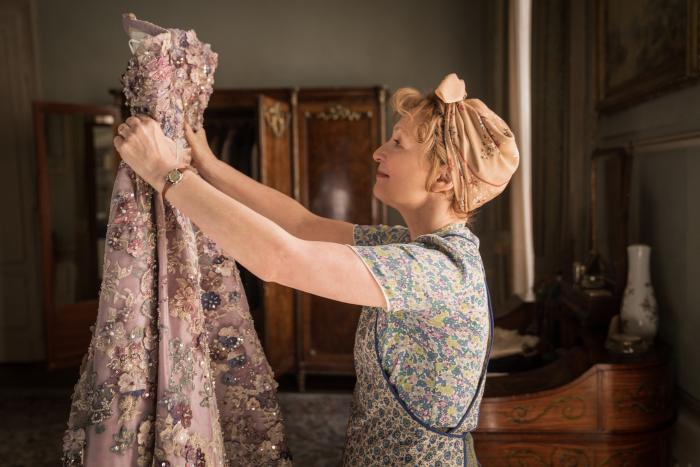 It has the feel of one of those too-good-to-be-true true-stories that would have made a huge splash in the women’s weekly magazines of the time—a 1950s cleaning lady saves up her money so she can buy herself a fancy haute-couture gown. It’s not a true story, but it has that magical je ne sais quoi that speaks to our bellies, know what I mean? So it’s actually the plot of a 1958 book titled Mrs. ‘Arris Goes to Paris (one that was such a hit it spawned an entire series of novels about its lead character), and now here some seven decades later it’s been turned into a charming fairy-tale of a movie called Mrs. Harris Goes to Paris starring a never lovelier Lesley Manville (as the distinct flip-side to her marvelous Phantom Thread turn) as the ‘Arris—excuse me, the Harris—in question.

Ada Harris (Manville) has been living a somewhat lonely life in her London flat for the past couple of decades when we meet her—her husband went missing in World War II, and she’s been trapped in a bit of amber ever since, unable to move on (at least romantically-speaking) lest he pop over for a spot of tea one day from where ever it is he’s gone and disappeared to. Ada isn’t delusional—she’s pretty much sure despite her best front that he was killed in action—but she nurtures that last little speck of doubt all the same. Who wouldn’t? Still she hasn’t just sat at home staring out the window for him all this time—she works all day at her various cleaning jobs, and at night she’s usually grabs a drink with her best friend and next door neighbor Vi (Ellen Thomas) and that nice chap Archie (Jason Isaacs) down at the pub.

And then one day some ‘appenings—excuse me, some happenings—converge on Ada’s little life, sending her on an adventure that these past couple of quiet decades wouldn’t seem to have indicated possible on their plain surface. First, bad news finally lands of Ada’s husband—the sort she expected yet dreaded in even higher measure. And second, as Ada nurses the pain this unleashes, a bright light of transformative possibility appears. Ada is cleaning the bedroom of one of her wealthiest clients when what should appear on their bed but a gorgeous purple gown covered in flowers and sparkling beads, one that lifts her up and floats her across the room like magic. She’s never seen anything so beautiful. She presses the dress against the simple floral pattern of her own cleaning apron and even though they represent two distinct worlds that should never meet, we can see it ourselves—credit goes to the light touch of Oscar-winning costume-designer and genius Jenny Beaven (of Mad Max: Fury Road and Cruella, among many many others), who knows how this sort of magic is done. These two clashing worlds still somehow match. It is just meant to be.

And while doubts arise here and there about the practicality of Ada’s newfound obsession as she upturns the world to get one of theses dresses for herself, writer-director Anthony Fabian smartly understands and makes the case for how important true beauty is in every person’s life—for its ability to inspire and transform us all. It’s got a bit of Meryl Streep’s “Cerulean” speech from The Devil Wears Prada in long-form to it, although far less strident—fashion, and by extension art, isn’t frivolous. It’s as vital to making the world go on as work and seriousness is, maybe even more so—our inner-selves cannot survive without things to inspire us to keep going. We need reasons to get out of bed in the morning; we need everything that that dress represents for Ada. Otherwise you end up people of means telling poor people they shouldn’t have cell phones; otherwise you end up with Republicanism, and nobody wants that.

So Ada checks and the label on the dress says Christian Dior, he of the inimitable Parisian fashion house of legend. And so Ada immediately starts saving her shillings to make the trip so she can have her own magical fabric something that will make her feel that wondrous feeling again, only all her own this time. She stops riding the bus to work and walking instead, she picks up some new gigs. And several fortunate windfalls sneak their way into her life too—things she takes as signs from the universe that she’s on a fortuitous path. Meanwhile Manville, great as ever, gives Ada such an indomitable spirit, sunny but doggedly practical in every aspect save this newfound scheme, that she’s impossible not to root for. This is a heroine we’re in with from first to last.

And as much as we know in our hearts while watching it that this isn’t the sort of movie that’s going to break our hearts too bad, the road to that dress gets surprisingly bumpy. It takes crests and valleys before she even gets to that titular city, and once Ada’s there the obstacles keep coming. The first second that she steps off the plane in Paris she’s confronted with a garbage strike, the Eiffel Tower’s twinkle set astride a putrid scent—this movie’s city-of-romance is one of rats and wage-wars and colorful winos. And that’s before she even uncovers the dire financial straights her ultimate couture destination’s in. Or before she starts bearing the sneers of Dior’s head-mistress played by the ever-capable sneer-ess Isabelle Huppert.

Mrs. Harris Goes to Paris floats between the fairy tale and the reality underneath of it with fine foot-work though, steered by yet another winning turn in a career full of them from Manville—hell the chance to see Manville shine in a leading role (outside of a Mike Leigh movie at least) is reason enough to catch this one, but Mrs. Harris has plenty more low-key loveliness to offer. It’s one of those perfect summertime antidotes to all the big dumb kid movies that rule this season’s cinematic offerings—here, blessedly, fitting right in alongside recent flicks like Hope Springs with Streep and Good Luck to You, Leo Grande with Emma Thompson, is a film that takes an older woman and her desires seriously, setting her needs front and center. That it bypasses the Prince Charming of it and goes straight for Cinderella’s gorgeous gown is part of its charm, and its charm is abundant, bursting at its seams.