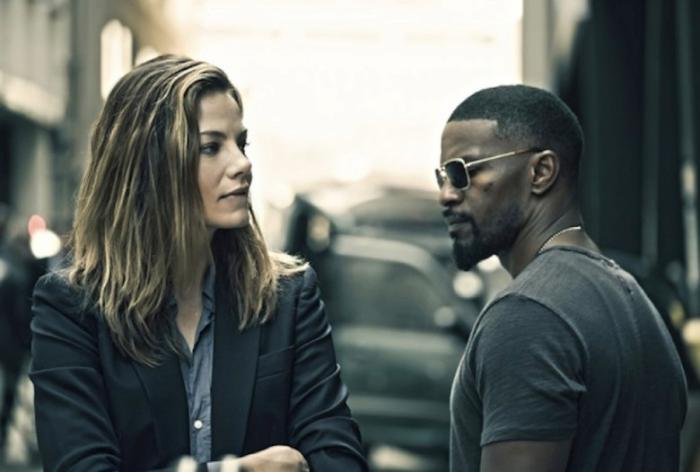 Publisher’s Note: Now that Netflix makes public its ten most popular films at any given time, we have witnessed that it’s largely a mix of new original titles like Extraction, a lot of Gerard Butler, and the occasional random title of an old movie that resurfaces on Netflix, like The Roommate or, this week, Jamie Foxx’s Sleepless, which was the most watched film of Netflix over the weekend.

Here is our original review of that film, which grossed $32 million worldwide on a $30 million budget in 2017.

The aching downside of seeing a truly sensational foreign-language film is the thudding realization that a sloppy American remake is inevitable. In the spring of 2012, I reviewed the French action-thriller Sleepless Night with unrestrained enthusiasm, calling it a film that “elevates the action genre to mind-bending and intoxicating territory with a fast-paced plot that’s peopled with intriguing characters, clever reversals, and above all relentless action.” With only vague but happy memories of this movie, I sat down to see its American remake, Sleepless. Sadly, even the foggy recollection of the original is better than this bloated bastardization.

For those who don’t remember or have never heard of it, Sleepless Night was the action film so fucking good it had critics arguing in favor of its Oscar chances, despite the Academy’s notorious genre bias. So how would Hollywood seek to recreate this lightning in a bottle? Oh you know. Take the original premise, and go big. Get a “big” name to sell it (Annie and The Amazing Spider-Man 2’s Jamie Foxx). Upgrade its setting from a claustrophobic French night club to a towering Las Vegas casino, despite the fact that lowers the stakes by offering more options for escape. And wedge into its 135 minutes much boring bickering between blandly biting baddies (Dermot Mulroney and Scoot McNairy), not to mention a string of scenes where flustered cops wait for elevators to arrive. Voila.

Sleepless follows police detective Vincent Downs through one hell of a day. At the crack of dawn, he’s investigating a drug heist that he himself committed with his crooked partner, all while trying to keep a pesky Internal Affairs agent (Michelle Monaghan) off his ass. Then he gets into a parenting tiff with his ex-wife (Gabrielle Union) before his jaded teen son (Octavius J. Johnson) gets kidnapped by the very dealers Vincent ripped off earlier. Now, this brooding dad must go to one of Vegas’s most imposing casinos to exchange a duffle bag of coke for his kid without being killed by a vicious kingpin or collared by the cops.

It’s a premise that worked gloriously in Frédéric Jardin’s breathless breakthrough. But helmer Baran bo Odar can’t muster any suitable suspense, bogging the pace down with tedious backstories and aspirational sequel setup. Instead of allowing Vincent to be a cool but distant anti-hero, the adapted script from Andrea Berloff huffs to lace in “I’m doing it for my family” motivation, and blustering bravado through banter that’s more cringe-inducing than clever. (“You know what they say at the airport: never leave your bags unattended!”)

The first film raced by at a riveting pace, chasing its sneering anti-hero through an elaborate labyrinth of grime and crime with one fight scene after another. Its remake limps through disparate set pieces, disregarding geography, foiling tension, and wallowing in the same tired shots of the neon-blazed Strip you’d see in any other Vegas flick. Admirably, Monaghan brings grit and throws herself full-bodied into the role of the IA agent desperate to uncover police corruption. But Foxx is on cruise control, strutting through one underwhelming action setup after another toward a showdown so senseless it might induce migraines.

There’s virtually nothing memorable in Sleepless. While Sleepless Night boasted a climactic fight scene that sold Vincent’s desperation by having him chuck everything—including the kitchen sink—at his opponent, Sleepless sets that scene in a flour-strewn kitchen set that makes it seem like the Benny Hill theme song would be better suited than the strident and cliched synth score. One moment that stood out was when Foxx’s rampaging cop shattered a champagne bottle topped with spouting sparklers then drove its sparkling stem into a random henchman’s neck. That was unexpected, but not nearly worth the price of admission.

I’m sure some of you are bothered that I compared the remake so heavily to its inspiration. Perhaps—you might suggest—I should have considered this American version on its own merits. Fine. Without Sleepless Night, Sleepless would be just mediocre, rehashing a sharp storyline in a tawdry setting with lazy archetypes and a cast that deserves better than the vapid execution and B-movie dialogue offers. Because of the greatness of Sleepless Night, I know just how truly terrible, shallow, and stupid this remake is, because the filmmakers were handed a winning recipe and somehow made this.