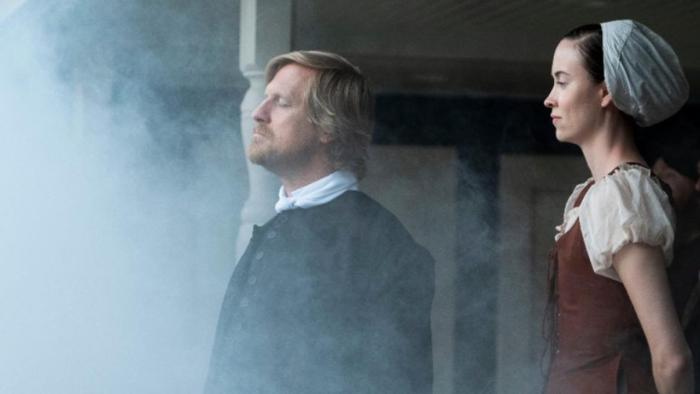 It’s November 1st, which means Halloween is behind us and Thanksgiving is dead-ahead. If you’re not ready to let go of the creepy fun of October, you might be eying Pilgrim, the latest offering from Hulu’s horror anthology film series Into The Dark. Allow me to warn against this temptation.

Directed by The Collector’s helmer Marcus Dunstan, Into The Dark: Pilgrim centers on a modern family that has lost touch with the spirit of Thanksgiving. They have a lovely home, plenty of food, and each other. That last bit feels more like a curse than a blessing for angry teen Cody (Reign Edwards), who deeply resents her stepmother Anna (Courtney Henggeler) and father Shane (Kerr Smith) for building their marriage on the ruins of her mother’s failed one. She does love her little guileless half-brother Tate (Antonio Raul Corbo), but cringes at every other aspect of this suburban life with its family dinners and neighborhood meetings of “Stepford Wives.” However, a fateful wish will force Cody to learn gratitude for what she has.

It all begins with Anna’s giddy nattering about how she’s booked an authentic “Thanksgiving Experience,” in which costumed pilgrims will come to their home and show them how things were done “in the olden days.” Most importantly, this online-ordered holiday experience promises to bring them closer as a family. Naturally, Cody eye-rolls over all this, and when offered the wishbone from their dinner table, she wishes that it all blow up in Anna’s smiling face. Little does she know this wish will bring a ruthless reckoning down on their entire family.

If this premise sounds familiar, it’s because the broad strokes closely resemble Krampus, Michael Dougherty’s sensational follow-up to his cult classic Trick ‘r Treat. There, a little boy heartbroken on Christmas holidays makes a wish that brings the titular beast down upon his household, sewing terror and snatching up family members with ghoulish glee and plenty of terrifically terrifying practical effects. Yet at its core, there was a sweetness to Krampus, which invited us to get to know this dysfunctional but dynamic family and wish for a happy ending. In Pilgrim, they snatch the setup but miss out on all the goodies that stuffed this far superior holiday horror film.

For starters, there’s no mounting sense of dread. There’s a bit of foreshadowing with the wishbone, then shortly thereafter pilgrims arrive at their door. In daylight. It’s odd but not creepy, especially because the family’s home is full of neighbors who bemusedly take snapshots of sturdy Ethan (Peter Giles) and stern Patience (Elyse Levesque). The threat is muted to the point it’s almost funny. There’s no sense of home invasion, as they are invited in. Even as their cohorts begin to accumulate—building a strange apparatus and a shifty shed—it’s not frightening. Or maybe pilgrims just aren’t frightening? With sunny days, silly outfits, and grim expressions, Pilgrim fails to achieve the unnerving atmosphere of cult horror films like Midsommar or The Wicker Man. Then there’s little build of suspense as crooked grins give way to a bit of blood then—bam—a body, killed unceremoniously offscreen.

From here, Pilgrim aims to play as a slasher, unveiling more bodies and stalking Final Girl Cody in suburbia turned seasonal hellscape. Dunstan fails to capture the menace of suburbia, though, where politeness might keep neighbors from peeking through curtains or over fences to investigate the blood-curdling screams next door. So the horrors unfolding feel muted and unreal, not grounded in a world to which we could relate. Further dampening the could-be terror of Pilgrim is its shallow interest in its characters. Giving Cody a backstory of heartbreak-by-divorce swiftly justifies her angst and wariness, but the film takes little other interest in her inner life. Her only moods are annoyed and scared. Meanwhile, Anna is tersely presented as a woman obsessed with appearances, while Shane’s sole character trait is being on his phone. Unlike Krampus, we never get to know these characters in a way that binds us to their story, or urges us to root for their survival. Instead, they become sloppy stand-ins for the lazy criticisms of modern life distractions from THE ALMIGHTY FAMILY UNIT. Watching them fight for their lives is downright dull.

I’ve reviewed the Into The Dark movies sporadically, chiefly because they’re so often underwhelming or flat-out awful that committed coverage doesn’t seem worth the effort. However, October’s Uncanny Annie proved a solidly entertaining and tightly paced haunted house tale that was basically “What if Jumanji but with a creepy ghost girl?” It worked! It was fun and frightening and got my hopes up for what would come next. Then, Hulu proffered Pilgrim, which is murky in its vision, lazy in its character development, uninspired in its violent spectacle, and stodgy in its pacing. Just be thankful it wasn’t your job to watch it.

Into The Dark: Pilgrim is now on Hulu.