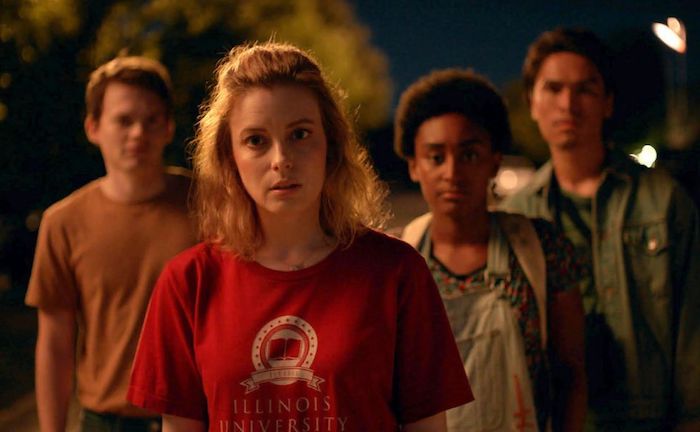 Watching a good hangout movie instills a particular kind of joy, and that’s precisely what I Used To Go Here is. It’s the sort of movie where you settle in, realize nothing particularly explosive is going to happen, and are happily along for the ride anyway because you’ve befriended the characters and are now deeply invested in the minutia of their lives.

Perhaps more than any other kind of film, the hangout movie relies on the holy trinity of well-developed characters, strong performances, and believable dialogue. I Used to Go Here scores high in all three. Front and center is Kate Conklin (Gillian Jacobs), a writer slowly coming to terms with the fact that her debut novel is DOA. Still recovering from a broken engagement, she’s surrounded by friends married and pregnant, planning futures where she feels stuck and aimless. Salvation—or at least a diversion—drops serendipitously in her lap via a phone call from her old college professor and crush David Kirkpatrick (Jemaine Clement), who claims to not only have read her book but enjoyed it, and invites Kate to do a reading for his class.

Returning to her alma mater of Southern Illinois University, Kate’s efforts to avoid painful realities by reliving her glory days ultimately end up forcing her to confront these demons head-on, in that sneaky way life sometimes does. Going back to her old college house, conveniently right across the road from the B&B SIU’s English department put her up in, she’s delighted to find the glow-in-the-dark stars she stuck on her bedroom ceiling are still there—and disquieted to realize that the current resident would have been in kindergarten at that time.

Writer-director Kris Rey (Unexpected, Empire Builder) has a strong grasp of the notion that making a compelling movie doesn’t require reinventing the wheel, just handling the basics well. Casting can be an underappreciated art, and I Used to Go Here evidences just how great it is to watch something that truly found the right people for each role. Jacobs, best known for her tenure as Britta in Community, shines as Kate, making a deeply empathetic and compelling figure even when displaying spectacularly dubious judgment. As David, Clement pulls off the charming-but-slimy-when-you-actually-stop-to-think-about-it professor with gusto. You shake your head at Kate’s lingering infatuation, but also, unfortunately, you get it.

The group of students who take Kate under their wing is a veritable showcase of young talent, from the observant Hugo (Josh Wiggins) to his estranged girlfriend April (Hannah Marks), an ambitious and talented young writer who brims with all the promise and potential Kate fears has passed her by. Not even the smallest character is a throwaway in this film. Elliot (Rammel Chan), the grad student gofer one missed Xanax away from a breakdown, is a delight. So is Mrs. Beeter (Cindy Gold), the scene-stealing B&B owner who represents one of the most accurate depictions of the passive-aggressive minefield of Midwestern “hospitality” this reviewer has ever seen.

It does feel somewhat ironic complimenting a film that refers to critics as “the worst kind of humans” for its nuanced insight, but that’s precisely the sort of tongue-in-cheek, quietly barbed humor that makes I Used to Go Here a real delight. When traversing particularly well-trod territory, the film has the self-awareness to side-step cliché, making for plenty of delightfully memorable exchanges.

A deceptively simple story subtly but effectively complicated by nuanced characters, compelling emotional beats, and a sharp sense of humor, I Used To Go Here is the sort of film that hooks you in sneakily. When the credits roll, you’re sad to say goodbye, but glad you went along for the ride.

I Used to Go Here is available on VOD.