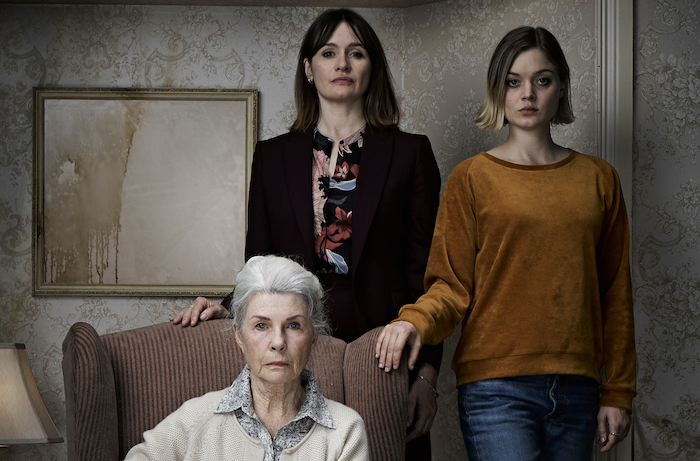 Review: Haunting Horror 'Relic' Will Make You Want to Call Your Mother

Tapping into classic horror tropes of haunted houses and demonic possession, Natalie Erika James’ stunning debut feature is the sort of chiller that burrows under your skin. Relic features the sort of slow-burning terror that eschews jump scares in favor of malaise that lingers in the mind long after the credits roll. When the elderly Edna (Robyn Nevin) goes missing from her country home, daughter Kay (Emily Mortimer) and granddaughter Sam (Bella Heathcote) return to the old family farm to search for her—and to be around in case Edna comes back. She does return, but both daughter and granddaughter are quick to realize something’s terribly amiss, and seems to have something to do with a mysterious bruise on Edna’s chest.

There are many subgenera of horror out there, and few have quite as rich and illustrious a history as the body snatcher. From Invasion of the Body Snatchers to The Thing to Get Out, stories of supernatural or extraterrestrial entities hijacking minds and stealing bodies are consistently among the most memorable and unsettling entries the genre has to offer. While the specifics of the commentary vary widely, the fundamental fears these films tap into are universal. Can I trust others? Can I trust myself?

It’s a particularly disturbing vein of horror, and Relic is quite unusual in that it taps into this legacy as a small mercy. Underneath the supernaturally decaying house and Edna’s demonic bruising, the real monster at the center of the labyrinth is a far more familiar creature and all the scarier for it. Relic plays out as a dark fable on the savagery of time and growing old. It’s a tragedy wearing a horror suit so that its commentary remains poignant while being palatable where the same message served straight would be a difficult sell.

A compact and intimate piece of filmmaking, Relic is packed full of smart choices that unsurprisingly pay off very well. Any viewer old enough to be renting VOD titles without getting thwarted by parental controls can see themselves in one of the three central figures. A lot of Gen-Zers and younger millennials can likely see some bit of themselves in Sam, still struggling to figure out what to do with her life. Older millennials and Gen Xers will more likely identify with Kay. For Boomers and above there’s Edna, because Relic has the basic compassion and thoughtfulness the M. Night Shyamalan “beware! creepy old people!” school of horror utterly lacks.

In addressing familial obligation, intergenerational conflict, and the trauma of growing old—particularly the horror that is dementia—Relic is incredibly clever without making the mistake of getting cocky about it. It doesn’t beat you over the head to make sure every allegory comes through with HD clarity. The script, co-authored by James and Christian White, understands the fine art of getting information across not just by what is said, but by what isn’t. While some of the dynamics between the three women are established in a handful of key scenes, a good deal more is left to inference, trusting performances and visual storytelling to get the rest across, and the audience to put the pieces together. Beyond just trusting viewers to pick up on subtext without shoving it down their throats, Relic respects them (and itself) enough to leave some room for mystery and open interpretation. A subplot involving an old cabin that used to exist on the family property, for instance, remains chillingly elusive even after the credits roll.

Hitting the sweet spot between bogging things down with dry exposition and disengaging opacity is one of the hardest balances to strike, and Relic pulls it off with the sort of grace that makes it seem easy. It’s a stunningly confident first film for James, who asserts herself as an up-and-comer to watch. At once genuinely unsettling and emotionally compelling, Relic plays like a terrifying, grown-up version of The Giving Tree in that it will leave you deeply unsettled—and feeling more than a bit guilty if you haven’t called your mom in a while.