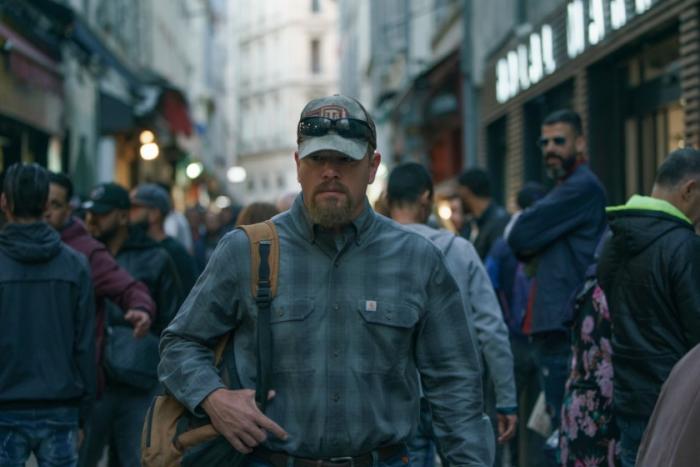 Here, Bill Baker is presented as a schlub, a doubtless rightwing fuck-up trying to make good with his neglected daughter (Abigail Breslin) as she finds herself locked up in France for a crime she says she didn’t commit. It’s a strange fit for Damon, who is charming and urbane. Elements of his performance feel a touch contrived, such as his stiff body language with his arms dangling helplessly at his sides, or his regulation USA outfit of ballcap, checked shirt, and terrible jeans. Nevertheless, his charisma is enough to get us on his side. This is where the chief interest of Stillwater lies, as Bill — a nobody, which no French, no understanding of France or the law — takes it upon himself to exonerate his daughter. The story hinges on us cheering Bill on, but the film is extremely ambiguous about Bill himself. This creates an interesting disconnect in tone, and cleaves open a political dimension in the film, making a statement about wider American interventionism.

Bill’s daughter, Allison, is in jail for the murder of her French girlfriend, Lina: the case has overt parallels with the case of Amanda Knox. One day, during a prison visit, Allison asks Bill to get her lawyer to investigate a lead about a young man, Akim, who apparently boasted at a party about killing Lina. When Allison’s lawyer refuses to get involved, Bill takes matters into his own hands, with the help of Virginie (Camille Cottin), who acts as his translator and unofficial guide to France. The interactions between Bill and Virginie are where the film scores. If the observations about cultural differences are sometimes a little heavy-handed, the movie is refreshingly acidic about Bill’s crass ways, giving Virginie several occasions to tackle him about his behavior. “You’re sounding very American right now,” she says at one point, as a criticism when Bill tries to defend a racist man they encounter during their investigation. On another occasion, she drawls, “when I see what you eat, I can see why you pray before.”

At the same time, the film shows us a man who is willing to change. As he comes to love looking after Virginie’s daughter Maya, and falls in love with Virginie herself, we see a man who is enjoying caring for others, who is learning to listen to and understand others. Some of these scenes are delicately drawn. For instance, in a dialogue-free interaction, Bill brings a hand to rest on Virginie’s leg, and she nods approval to him, and Maya notices by this sign that her mother and Bill are now a couple. Some French elements are a smidgeon over-egged, but even there the dialogue has some authenticity, using proper slang and conveying an actual French character of resistance to Bill’s puritanical ways.

In these moments, the film seems to forget all about the thriller plotline that is underway — and when it returns to it, that narrative has all the more force because so much is now at stake. Bill doesn’t want to lose his new chance at happiness by getting in too deep. Watching this, it seems remarkable that so few films have anchored their elements in suspense in normality. When this film turns its hand to that, it generates a great deal of suspense from these clashing modes. And in so doing, Stillwater, which has a couple of twists up its sleeve, has a gut-punch in store, as it invites us to question, deeply, the legitimacy of Bill’s action plan when he confronts a suspect himself.

In the Bourne films, you never question Jason — but here, what’s to say that Bill Baker and his daughter deserve our sympathy? This tricksiness is refreshing, and politically astute because it makes the whole film function as a critique of American pre-emptive interventionism; of its cultural imperialism, too. This is no small feat, for a big American film starring golden-boy Matt Damon.

Stillwater is no masterpiece, and certain elements land awkwardly, such as the communication between people speaking different languages, and the rather heavy depiction of mid-west America. Ultimately though, the way this drama invests a bit of time and effort into constructing fleshed-out characters results in a thriller that feels resonant on both a personal and a political level.

Reviewed out of the Cannes Film Festival, Stillwater opens in theaters on July 30.

← Let's All Take A Minute To Trash Talk The Delta Variant | Review: 'Enemies Of The State' Offers a True-Crime Mystery With A Hole In The Middle →