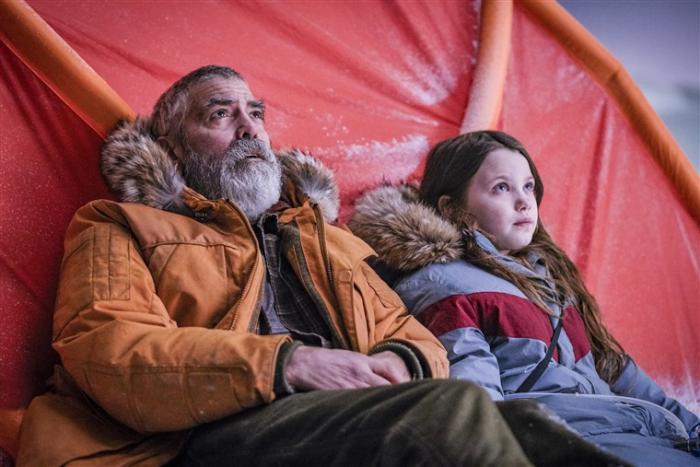 On Netflix: George Clooney's Sci-Fi 'The Midnight Sky' Is Great, Except for the Science and the Fiction

Clooney, Pitt, and Damon apparently conspired on the set of Ocean’s One or the Other to produce a loose trilogy of Daddy Issues In Space with Interstellar, Ad Astra, and The Midnight Sky. Clooney’s entry is the worst of the bunch but shares much of the tone of the others, of their slow ache of contemplation, of fathers and regret and children grown distant.

It’s based on a book, and not having read it, I can only assume that as always the book is better based on the evidence that, in this case, it would just about have to be. It hurts to watch because it has so many pieces right: a cast to kill for, a director adapting something he clearly adores, a budget and eye for gorgeous shots. But more: it really does have something profound and meditative that it’s reaching for, but its grasp is stymied by cliché and tedious nonsense.

The film begins so promisingly, so that you can see for a half hour or so the vision that drove making it. Clooney (who also directs) haunts an abandoned arctic station after the world has ended, slouching into the corners of frames, his smallness cringing before vast windows looking out on an infinity of ice and stars blazing in the blackness above. There’s a bone-deep weariness in his mundane routines, crunching through a bowl of cereal on autopilot after Armageddon. He drinks and remembers. Snapshot flashes of a life scientifically brilliant but personally wasted.

But then plot intrudes, with science that is just sky shatteringly bad, breaking any semblance of a suspension of disbelief. There’s a newly discovered moon of Jupiter. That is habitable.

Step outside, you can see Jupiter. Pull out some binoculars, and you can see all its big moons. We’ve sent probes there. There’s no hidden moon. This is like a movie premised on finding another continent in the Pacific because we’d never hung a left at Guam.

The plot further entirely hinges on the world sending a spaceship there to see if it can support life, and when they come back two years later, they have been out of contact with Earth the whole time and don’t know that the world ended.

While they were gone.

Remember how we can see Jupiter? That means we can talk to someone at Jupiter because a signal has line of sight. How else do you think we got pictures of Jupiter from our probes? They didn’t swing back to drop them at a CVS to get developed.

Like, yeah, if Jupiter was on the other side of the sun from us you could conceivably have that in the way for a bit. But not for two years. You know, because of the physical definition of what a year means in terms of the Earth going all the way around the sun? I’m not even bothering to get the Wikipedia rundown on this, so feel free to go full astronomy nerd in the comments.

The ship gets close enough to Earth and they scientifically declare, “We just got our first view of Earth.” And they’ve got a full-screen magnificent view of a suitably catastrophic-looking planet. As if they just came around a bend in the road and suddenly could see it. As if space isn’t fucking empty.

The thing is that none of this is being a science nerd nitpicking the details. It’s all stuff that is integral to the entire plot of the movie. And it’s not hand-waved away with unsatisfactory explanations; it provides what it thinks are perfectly plausible scenarios, which are just painfully ignorant.

There’s that joke about how if the plot of your novel can be eliminated if two people just had a five-minute phone call in the first scene, you have a shitty plot. The entire plot of this movie rests on the crew of the ship being unable to see the Earth or talk to it. And no rational reason is provided at any point why this is the case.

There is a solid interminable hour of the movie that is nothing but ill-conceived and utterly cliched action sequences. Clooney battles through Arctic weather to get to a different weather station with a bigger antenna, and the crew of the spaceship battles damage and injuries caused by collisions with meteor showers on account of “flying through uncharted space.” That would be the empty space around Earth that we have had telescopes pointed at for four hundred fucking years in case you hadn’t space nerd aneurysmed enough.

The plot of the movie doesn’t happen if the inexplicably negligent mission control just pings the spaceship with “Probably should stay there, nuclear war, civilization over, LOL.”

But, OK, the plot and science are terrible, the movie drags on with pointless action, but why did I start this review by saying such nice things about what the movie could have been? Because there’s an emotional core there that dominates the start of the movie and peeks out toward the end even as it tips toward an atrocious manipulative bullshit twist that you saw coming from the other side of Jupiter.

One character, squeezing every bit of mileage out of a wasted role, explains toward the end of the movie in a short but heartbreaking soliloquy that he knows what he is about to do will accomplish nothing, but that nonetheless, it’s what he chooses to do with the time he has. And I think that line communicates what the movie wanted to contemplate before getting lost along the way.

When we are young, we think that death is to be conquered, staved off, and that if and when it comes it should mean something, that there is immortality in making the right last stand. But that’s the narcissism of youth, always thinking they’re the protagonist and that the story ends when they do. The world goes on without us, both as an individual and a species. As we get older, if not wiser, I don’t think it’s so much that the past matters more the less future we have, but that our consciousness of the present expands, that our concern is making the moments matter.

And so when Armageddon comes, when the lights fall on our particularly upstart collection of proud monkeys, that’s the question the last of us will be left with, staring out at the once and future darkness. Not whether we died well, but whether we used our time well.

It’s too bad The Midnight Sky didn’t use its better.