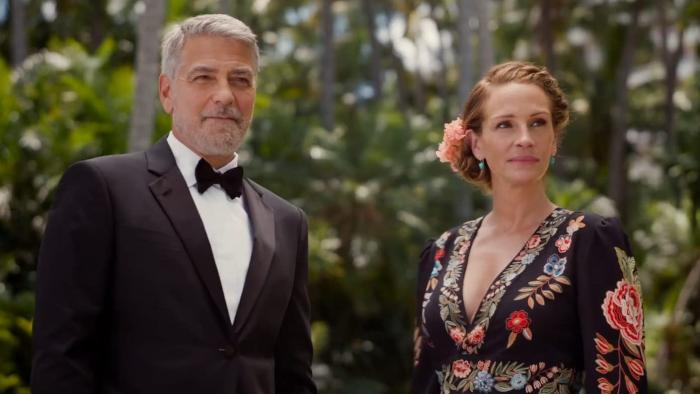 Ticket to Paradise, which is now available digitally after a successful box-office run, stars George Clooney and Julia Roberts, and it is almost exactly what one might expect from a comedy of remarriage starring George Clooney and Julia Roberts. Who says romantic comedies are dead? All they’ve been missing is a screenplay with broad comedy that is not brain-dead and two of the biggest stars on the planet.

In Paradise, Clooney and Roberts — in their fifth pairing together — play David and Georgia Cotton, ex-spouses who loathe one another for no discernible reason. They are forced to work together, however, when their daughter Lily (Kaitlyn Dever) meets, falls in love, and decides to marry Gede (Maxime Bouttier), a seaweed farmer in Bali. David and Georgia have to travel to Bali by plane (Georgia’s boyfriend, Paul (Lucas Bravo), is coincidentally their pilot) and conspire to break up Lily and Gede before they make a huge mistake.

There are zero surprises in Ticket to Paradise. Everything you think will happen happens exactly as you expect it to happen. Billie Lourd is also along to play the zany, promiscuous best friend of the bride, and she is also exactly as you would expect, toned down by a factor of five.

Knowing what will happen, however, doesn’t make the film less pleasant. The film skates by on the charisma of Clooney and Roberts and the gorgeous island setting; the script is almost beside the point. It’s trifling but delightful, exactly the kind of comedy where the end credits are accompanied by bloopers, where the audience gets to fawn over Roberts and Clooney breaking character, laughing, pranking each other, and making jokes at Brad Pitt’s expense. “These two are great friends, aren’t they?” you think as every other memory of the film disintegrates like cotton candy. The earworm the film leaves in your brain will leave a more lasting impression.


← Dear Rian Johnson: Please Cast These Actors in 'Knives Out 3' | Review: Netflix's 'Troll' Is A King Kong Story Out of Legend →