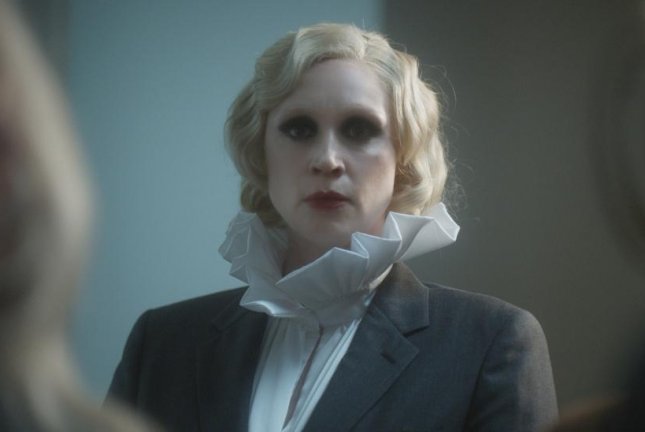 Review: 'Flux Gourmet' Turns an Extended Fart Joke into an Empathetic Treatise on Loneliness and the Power of Art

We see a slight variation on this sequence several times across the length of Flux Gourmet, the latest mad-man masterpiece from the mad-man genius Peter Strickland—he formerly brought us Berberian Sound Studio, The Duke of Burgundy, and In Fabric, a trio of films I’d stack up against any other filmmaker’s, quality-speaking—just each time with different foods and moods coming from that front-woman and her mates. The front-woman is named Elle di Elle and is played by Strickland regular Fatma Mohamed (who always exceeds the assignments, no matter how wacky, that Strickland tasks her), while her back-up band-mates are called Billy and Lamina, and are played by Strickland newcomers Asa Butterfield and Ariane Labed. (Labed in particular, strolling into the Strickland-verse after being a regular in the movies of Yorgos Lanthimos, fits right in.)

That trio, constantly bickering over ancient rivalries and freshly perceived slights, make up the nameless art collective who have been invited to work out their kinks (and their kinks) for a four-week residency at the isolated mansion of Jan Stevens, the headmistress-of-sorts at an art institute devoted to, as the press notes state, “culinary and alimentary performance.” They stick microphones into food, basically. And Jan Stevens, it must immediately be noted, is played by the magnificent Gwendoline Christie of Games of Thrones fame—Christie previously showed up in Strickland’s In Fabric and we were all like, “Oh right. That makes sense.” Here all of her magnificent six-foot-three-inches are once again magnificently trussed up in a vast array of flouncy fabrics, satin bunny bed-helmets, and raccoon eye make-up, oh my. Strickland’s penchant for surreal glamour strikes again. (She’s magnificently funny.)

Beside that colorful foursome, also on hand to record everything that happens during this four-week residency is the disgruntled writer and decidedly less-colorful Stones (Makis Papadimitriou), the institute’s hobbity on-site dossierge. His one-on-one interviews of the performative trio give us insight into their histories, their fears, their stories and overlapping intentions. All while Stones battles a mean case of flatulence on the side.

This brings me to the flanger. After watching the group’s first performance, Jan Stevens has some notes, and the notes are basically, “Less flanger.” Elle, being the group’s naked front-woman and “idea person,” has no idea what a flanger is. Nevertheless, she resents the mere suggestion of “notes,” and so Elle insists the flanger will stay. Hell, more flanger even! But Jan Stevens will have her flanger way dammit, all flangers be damned. And if you’ve just heard the word “flanger” more times than you’ve ever heard the word “flanger” before in your entire lives, prepare yourselves. Because you’ll hear it, and several other words and phrases that Peter Strickland has dug out of the world’s word graveyards, a bunch more across the rollickingly strange length of movie-magic that makes up Flux Gourmet. Strickland makes the flangers sing.

It’s not for nothing, this linguistic fetishism that Strickland’s perfected. His movies (all of which he has scripted himself) are a word-lovers dream. The way the Davids (Cronenberg and Lynch, of course, who else) use stiltedness and silence to let us know that baby, we ain’t in Kansas no more, Strickland uses flowery and anachronistic dialogue spoken by actors with incredibly thick, unplaceable accents. Everyone in a Strickland film sounds like chunks of their dialogue have been translated back and forth by Babelfish a few times, giving it an unmistakable ownership and rhythm that’s all his—where else could someone angrily yelling, “Have a stupid day!” possibly land with such impossible sadness?

But that originality in delivery and intent extends beyond the immensely memorable things these characters are saying and how—Strickland just sees the world in wholly original ways, ways I personally have come to appreciate like air and sunshine and sex and animal cookies (not in that exact order). The Duke of Burgundy, which remains his most digestible masterpiece to date, turned a dom-sub lesbian relationship involving human toilets into the grandest of love affairs, while In Fabric satirized our consumptive culture straight down into the churning belly of hell itself.

Flux Gourmet, for its part, is content to blast the doors off an extended fart joke. It turns a wee bit o’ flatulence inside out, instead giving us an empathetic treatise of loneliness and the power of art to emancipate. Stones’ mysterious ailment is latched onto by all the parties involved for cross-purposes—the resident doctor (Richard Bremmer, still as much of an elongated special-effect here as he was in In Fabric) embraces giddy torment, while Elle like any artist is drawn toward all human weakness with the intrinsic desire to cannibalize it for her art. Stones’ inner tubes become outer playthings, the chasms between intestines and stethoscopes, colonoscopies and stage performance, rendered moot. (And it will probably be said by a lot of people but this movie will make for an astonishingly ace double-feature with Cronenberg’s Crimes of the Future.)

There is a lot of on-its-surface shocking imagery in Flux Gourmet—you could call it a “Foodie Salo” and be right on the mark—and yet it’s all so funny and sweet and playful (not to mention exquisitely filmed by D.P. Tim Sidell and exquisitely amplified by Sound Mixer Cassandra Rutledge and Sound Designer Tim Harrison) that it goes down super extra groovy smooth. It’s got the surrealist sense of humor of late stage Buñuel, the cat-suits of Irma Vep, the dangerous mimes of Fellini, and the final smile of Midsommar rendered maybe actually legitimately triumphant this time? Basically, it’s all of the courses and a few you’d never ever ever have thought of in your wildest dreams, dolloped heavily with that singular Peter Strickland secret-sauce. Delicioso stuff! Will go back for seconds.