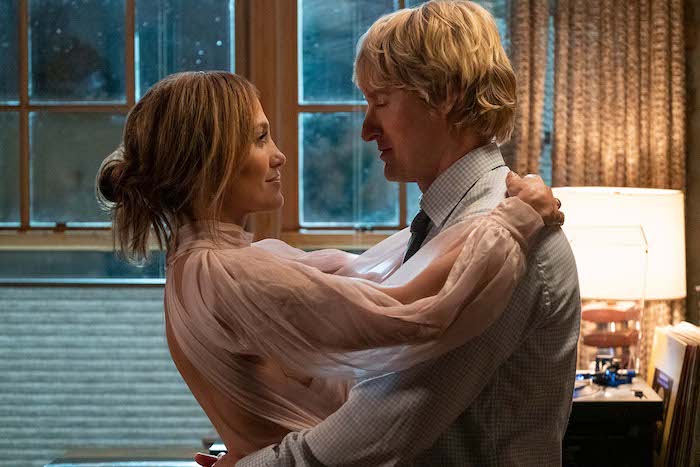 Review: Escape the Worst Timeline For a Few Hours with the Fluffy Delights of 'Marry Me'

In case you have not heard, the post-Covid “new normal” might actually start looking normal-ish pretty soon (Omicron subvariants dependent), and just in time for Putin to invade Ukraine. Sure, the WWIII predictions might be a bit hasty, but studies have shown that even bees turn into pessimists after being put in a box and shaken vigorously to induce stress, so the hyperbole feels earned in that regard. Like those bees, I am shook, stressed, and ready to interpret any and all ambiguous stimuli as the worst possible scenario. We all are. Everything is terrible here all of the time.

All of this to say that when presented with Marry Me, a candy-coated pocket universe displaying all the hallmarks of an early-aughts J. Lo rom-com, newly released in the gently reheated leftovers of 2020’s sewage flambé otherwise known as the year 2022, my immediate response was yes. Inject that sh*t right into my veins.

Jennifer Lopez stars as Kat Valdez, basically a loosely fictionalized version of Jennifer Lopez who never branched out into acting. A pop diva with multiple short-lived marriages already behind her, Kat plans to tie the knot for a third time with fellow pop sensation Bastian — Maluma, playing a loosely fictionalized version of himself in his first live-action acting role (he previously voiced the small role of Mariano in Encanto). However, Kat’s plans to marry her fiancé on stage in front of a crowd of adoring fans in the wedding-concert of the century go awry when Bastian’s affair with none other than Kat’s assistant comes to light mere minutes before they are set to exchange their vows. Kat’s assistant technically has a name I cannot remember, but as she is less a full-blown character than a quickly forgotten plot device, looking it up does not feel like an effective use of either my time or yours.

So what does Kat do? As the show must go on, she does a schoolyard pick of the audience and zeroes in on none other than Charlie (Owen Wilson), a well-meaning square of a math teacher so out of touch he still owns a flip-phone, who only ventured out of the quiet comfort of his Brooklyn apartment in the hopes of impressing tween-aged daughter Lou (Chloe Coleman). He’s technically holding up a sign that says “Marry Me,” so when Kat singles him out and accepts the challenge, Charlie goes along with marrying her in front of a sold-out audience. After all, he is a single, straight man, and she is J. Lo — what else would he do, refuse?

Now, on to the real questions, such as, can Maluma act? And the answer to that one is that it’s still very much a question, considering he is basically playing himself. He does do a solid job delivering the line, “You married some random albino guy on stage” — credit where credit is due. But credit most of all to the casting team, who really understood the assignment here. The basic sum of the role is singing well and looking hot, which is Maluma’s natural state of being.

Competently if somewhat unremarkably directed by Kat Coiro, Marry Me is the sort of film that sticks to traditional stylistic defaults with such a high degree of technical polish that you just don’t think about things like framing or editing choices. They are so effective at not drawing attention that they basically actively redirect your thoughts elsewhere, like appreciating whatever impeccably stylish outfit Kat is inevitably wearing in a given scene. Overall, it’s an easy-breezy nostalgia trip of a film that retains many of the most delightfully fluffy qualities of Lopez’s most famous earlier career romcoms while updating the more regrettable elements much better off left behind in the aughts, like fat jokes and homophobia.

Marry Me is the sort of fluffy rom-com that inevitably gets criticized by many for not being another movie entirely — something with more conflict, sharper edges, and less unabashed romanticism. But focusing instead on what the film actually is and the audiences it actually caters to, there is still particularly lamentable shortcoming: for a film that is pure escapism, many of the characters —both in how they are written and how the actors perform them— feel too restrained for this cotton-candy cloud of a film to be the peak version of the sugar high it could be.

Looking at the history of the Hollywood romantic comedy, there’s a decided irony here. Back in 1938 when Bringing Up Baby, now one of the most iconic romcoms of all time, underperformed upon initial release, director Howard Hawks claimed his “great fault” was a failure to include any normal people. “Everyone you met was a screwball and since that time I learned my lesson and don’t intend ever again to make everybody crazy,” he later reflected.

Maybe this was true for 1938. Maybe there’s even a grain of truth in this advice now. But Marry Me demonstrates that while having no straight man (comedically) might alienate audiences, having too many of them is not the superior option. Of all the characters, it’s only Parker who consistently feels exaggerated enough for the indulgently fluffy premise — she’s dialed up to 11 where everyone else feels like they’re hovering more in the 7 to 8 range. Which, you know, is good. It’s enjoyable. But it’s not as fun as it could be.

Marry Me is playing in theaters and streaming on Peacock.