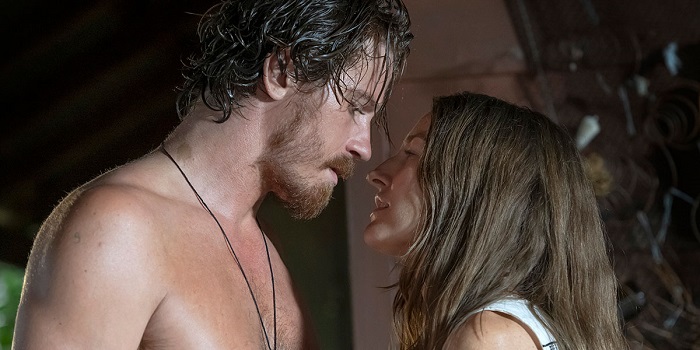 The Central Romance of ‘Dirt Music’ Relies on Too Many Coincidences, But the Movie Sure is a Beautiful Tourism Ad for Australia

Anyone who has been around here at Pajiba long enough or follows me on Twitter knows that my Garrett Hedlund thirst is strong. That voice and floppy hair! He was surprisingly good in Triple Frontier! HAVE YOU WATCHED MUDBOUND?

Hedlund co-stars in Dirt Music, and I wish I could tell you that the movie is good. Alas, it is 1 hour of a self-aware film that feels like a ’90s throwback, and 1 hour of an increasingly convoluted narrative that reaches Nicholas Sparks levels of hackneyed. Screenwriter Jack Thorne has made changes to Tim Winton’s original novel that make the film unnecessarily complicated, and each “Can you believe it?!” plot twist is an extraneous coincidence that takes away from what could have been a pleasant throwback of a romantic thriller.

Dirt Music is set in Western Australia, beginning in a bougie fishing town basically run by Jim Buckridge (David Wenham, giving me strong Top of the Lake vibes), whose knowledge of the water and dominance of the market allow him to pull in $80,000 with just one catch of western rock lobster. Nearly every fisherman in town is beholden to him, and so those men and their wives and their families all look upon him with respect and fear—and treat his girlfriend Georgie (Kelly Macdonald) like an interloper. She used to be a nurse before she met Jim, someone with her own life and her own interests, but now she’s basically just a glorified babysitter to his sons in their gigantic, oceanfront, wrap-around-windowed home. (I might have been obsessed with this house while watching the film. It is Big Little Lies levels of glorious.)

Georgie needs a way to assert her independence again, and she finds how in Lu Fox (Hedlund), who she spies sneaking out in the middle of the night, using his little boat to steal from Jim’s lobster pots. Georgie knows who Lu is—a onetime musician whose family was devastated by tragedy—and their attraction is instantaneous. Their passionate affair, though, won’t go unnoticed by a community willing to turn on Georgie and report to Jim; “I’m not a very loyal fish wife,” Georgie smirks at Lu before they sleep together, but they both know the danger involved.

That’s about the first hour of Dirt Music, and it’s pretty good! I long for the 1980s and 1990s, when mid-budget adult-themed dramas were made about bored women and hot men doing the damn thing. Body Heat! Obviously Basic Instinct! David Cronenberg’s Crash! A Perfect Murder with Viggo Mortensen, decades before the awfulness of Green Book! And to be fair, it’s not that Dirt Music gets as raunchy as any of those films, but it doesn’t even stay as committed to its central love story as the more straightforward Nora Ephron romances or Diane Lane’s Under the Tuscan Sun or, hell, even a film as stylish as The Thomas Crown Affair. Instead, the film increasingly veers into the Nicholas Sparks lane, with dead children and dead pets and endless melodrama, and how the film continues layering on the connections between characters and the unexpected reveals about people’s motivations takes us away from what should matter most, which is the bond between Lu and Georgie.

Hedlund and Macdonald at least have some chemistry together: Although Macdonald’s Georgie is not nearly as developed as she should be to help us understand why she would settle for a guy like Jim or be so intrigued by Lu, Hedlund goes the Mudbound route here and believably portrays Lu as someone ensnared in memories he can’t let go of and pain he can’t forget. The film goes on way too long and asks him to stare forlornly into the distance way too often, but at least he has a grasp of the character and how deeply Lu is a “burning, screaming wreck.” And while some of the folksy tunes that Fox’s family sings are enjoyable in a roots-rock sort of way, they’re also way overused, cued up every time the movie needs Lu to shed a tear.

All the actors pale in comparison with the real star of the film, though: Australia itself, which looks staggeringly gorgeous as shot by cinematographer Sam Chiplin. The beaches, the rock formations, the islands—it’s all seemingly deeply isolated, fantastically beautiful, and exactly like a place where you would love to get lost. At least director Gregor Jordan does us a solid with Dirt Music by helping us choose our next dream-vacation location, but otherwise, the film is far too uneven and needlessly labyrinthine to succeed as the impactful romance it wants to be.

Dirt Music is available to rent or buy on iTunes and other streaming platforms and pay TV operators.

← 'Game of Death' Review: It's All Fun And Games Until Your Friend's Head Explodes | Review: If You Still Feel Joy, 'The Painted Bird' Can Fix That →