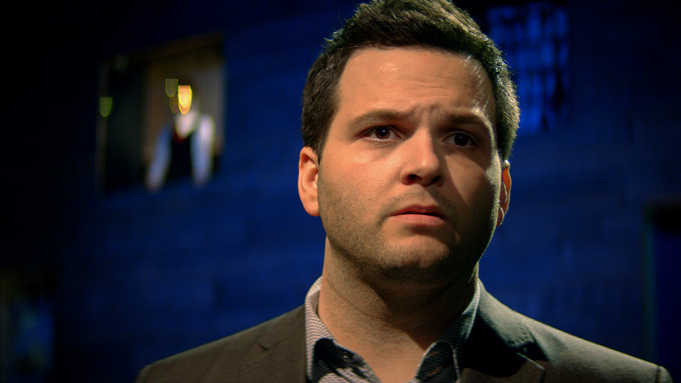 Now On Hulu: 'Derek DelGaudio’s In & Of Itself' Is Riveting Rubbish

I had been hearing murmurings about Hulu’s Derek DelGaudio’s In & Of Itself for a few days before I decided to check it out, although no one had told me exactly what it was. Something about a magic show, or performance art with illusions. I dialed it up on Hulu and the description they give is so pretentious that my retina almost detached because I rolled my eyes so hard:

Derek DelGaudio’s In & Of Itself is a new kind of lyric poem. It tells the story of a man fighting to see through the illusion of his own identity, only to discover that identity itself is an illusion. An intimate and powerful exploration of what it means to be and be seen, the film chronicles Derek DelGaudio’s attempt to answer one deceptively simple question, “Who am I?” His personal journey expands to a collective experience that forces us to confront the boundaries of our own identities.

I believe 👀 is the appropriate response to that.

Nevertheless, in light of what I have just watched, it’s a weirdly apt description for what In & Of Itself is. It’s like an intro to philosophy class with card tricks. It’s bullshit, but it is riveting bullshit. That might sound like an insult, but it’s not. Paul Thomas Anderson’s Magnolia is also riveting bullshit. As is Donnie Darko. They’re movies that shouldn’t make sense, that shouldn’t be good, but that work because of performances so daring and directing so self-assured that we forget how sometimes meaningless the underlying text is.

In & Of Itself, likewise, is as mesmerizing as it is because of the soft-spoken intensity of Derek DelGaudio. It’s a powerful stage performance filmed and edited into a documentary by Frank Oz, and DelGaudio casts a spell over his audience (both in-person and at home) like a Baptist preacher entrancing a flock of atheists. For an hour-and-a-half, you will believe, even if the spell breaks as soon as the credits roll.

It’s also a difficult show to describe, and trying to do so would be reductive. There’s a guy who gets up on a stage, and he does some really cool card tricks while he tells some stories with a lot of dramatic pauses that probably wouldn’t be very interesting outside of the context of this performance, but within it? Wow. It is engrossing, almost immersive, and often very emotional, at least for the audience in attendance. DelGaudio pulls off some neat illusions or mind-tricks or whatever the hell it is you want to call them and they’re doubly effective with audience members whose emotions are heightened exponentially by their presence in a room with a few hundred strangers.

Speaking of which, that is also a neat feature to In and Of Itself: Oz pulls from among DelGaudio’s 552 performances in New York in 2017-2018, and it’s nice to see audiences again, as though looking into the not-so-distant past. It’s also, admittedly, a fun experience that you might immediately want to share. I watched it alone, but I’m sorely tempted to watch it again with my kid, because there are a lot of wow moments in In and Of Itself even if ultimately the magic is quick to wear off once it’s over.

Derek DelGaudio’s In & Of Itself is now on Hulu.


← 'Nah No More Banana For Me, Cheers' | Justin Timberlake Brings a Big Heart to a Small-Town Story in 'Palmer' →