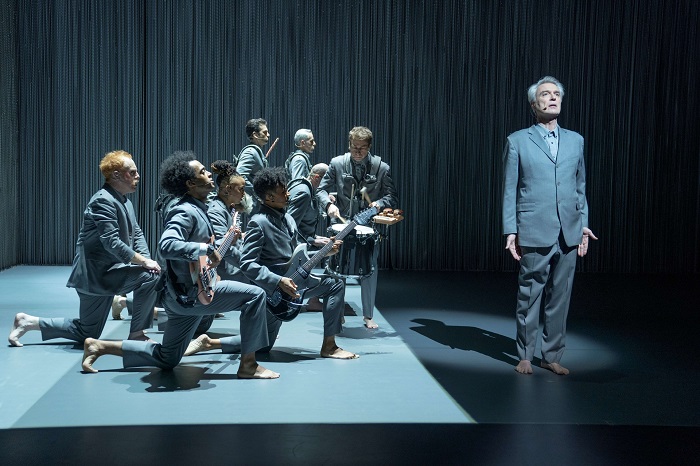 David Byrne and Spike Lee invite you into the former’s mind in the concert film David Byrne’s American Utopia, and it’s a delightful place to spend a couple of hours. Byrne, the former frontman of the new wave trailblazers the Talking Heads, has been very intentional in the past couple of years about his desire to spread cheer, find joy, and emphasize positivity in our currently nightmarish reality. On the one hand, my extremely cynical self is exhausted by even the idea of so much exultation. On the other hand, American Utopia is an infectiously energetic project from Byrne, with its sense of vibrancy captured effectively by Lee’s crisp direction. I surprised myself with how much I enjoyed American Utopia, and how fully I got swept up in its mixture of bouncy, increasingly experimental performances and Byrne’s own sincerity.

Released in March 2018, American Utopia was Byrne’s first solo album in 14 years, and its songs reflect a desire to find, and embrace, everyday pleasures. Album opener “I Dance Like This” is a mixture of proud and apologetic (“I dance like this/Because it feels so damn good/If I could dance better/Well, you know that I would”); “Every Day Is a Miracle” considers life’s contrasts (“Every day is a miracle/Every day is an unpaid bill”); and the album’s first single, “Everybody’s Coming to My House,” doesn’t shy away from the inevitability of death, but imagines various ways for us to pass the time (“We’re only tourists in this life/Only tourists but the view is nice”). Remember that Britney Spears song about how we should all “Keep on dancin’ till the world ends”? That’s sort of the vibe of American Utopia, which encourages a perspective on life that finds meaning in broad empathy and shared happiness.

Byrne adapted American Utopia for a Broadway show at Hudson Theatre, which ran from October 2019 through February 2020; it was supposed to return last month, but is now delayed until September 2021 thanks to the COVID-19 pandemic. So this filmed version is basically your only chance to see American Utopia until next fall, and to Lee’s credit, it is an immersive concert film. Lee does two things excellently: He relies on numerous overhead shots to show us the artfulness of the choreography and lighting design and to help us understand the layout of the stage and how Byrne and his team of 11 vocalists and musicians move around within it, and he understands that while Byrne is obviously the star here, he chose his stagemates for a reason. Every band member gets their own close-ups and their own stand-out moments, and you’ll have a sense of each individual’s personality very quickly. Lee enlists cinematographer Ellen Kuras (who also shot the music docs Rolling Thunder Revue: A Bob Dylan Story by Martin Scorsese and Neil Young: Heart of Gold, as well as Michel Gondry and Charlie Kaufman’s masterpiece, Eternal Sunshine of the Spotless Mind) and film editor Adam Gough (who also worked with Lee on Da 5 Bloods), who satisfyingly mix up shot compositions and transitions to create an all-enveloping feel. Time moves briskly within American Utopia, which never feels repetitive or sluggish thanks to Lee’s communication of Byrne’s vision.

The stage design here is stark: Nothing but Byrne at first, in a grey suit and barefoot, surrounded by sheets of metal-linked curtains that shimmer like a waterfall. American Utopia begins with Byrne sitting at a table, considering a plastic brain, which allows him to introduce the show’s guiding idea: As we grow older, physically, our brains have fewer neural connections than they did when we were babies. We approach a sort of “plateau of stupidity,” one that limits our ability to find common ground with others. In light of that, Byrne wonders, who are we as people? “Who am I?” Byrne asks, and that curiosity sets us off.

The song choices span American Utopia (“Bullet”), some of Byrne’s other solo songs (“I Know Sometimes a Man is Wrong,” from his first solo album, Rei Momo), collaborations with other artists (“Lazy,” from British house duo X-Press 2; “I Should Watch T.V.,” with St. Vincent), and, of course, an array of Talking Heads classics, including “This Must Be the Place,” “I Zimbra,” “Born Under Punches (The Heat Goes On),” “Burning Down the House,” and “Road to Nowhere.” The roar from the very pleased crowd when the first few chords of “Once in a Lifetime” reverberate through the theater is a blissful thing.

Vocalists Chris Giarmo and Tendayi Kuumba often flank Byrne, their blue eyeshadow and red lipstick as uniting as their shared dance moves, which sometimes evoke yoga poses or tai chi movements. At another point, all dozen people onstage line up horizontally, with each musician getting their own chance to come forward and break it down as Byrne introduces them. The staging evolves and becomes more complex: spotlights are arranged like a checkerboard; combinations of blue- and orange-tinted lights make Byrne et al. almost look blurry, with a doubling and tripling of shadows; the flashes of a stuttering strobe make it look like Byrne and the band are moving in slow motion. And yet some of the production’s strongest moments are when Byrne and his band are starkly declarative: when they take a knee and raise a fist in front of an image of Colin Kaepernick (“How am I not your brother?/How are you not like me?” during “I Should Watch T.V.”); when Byrne evokes Hamilton while describing his bandmates (“Most of us are immigrants, and we couldn’t do it without them”); and when they cover Janelle Monáe’s 2015 protest song, “Hell You Talmbout.” 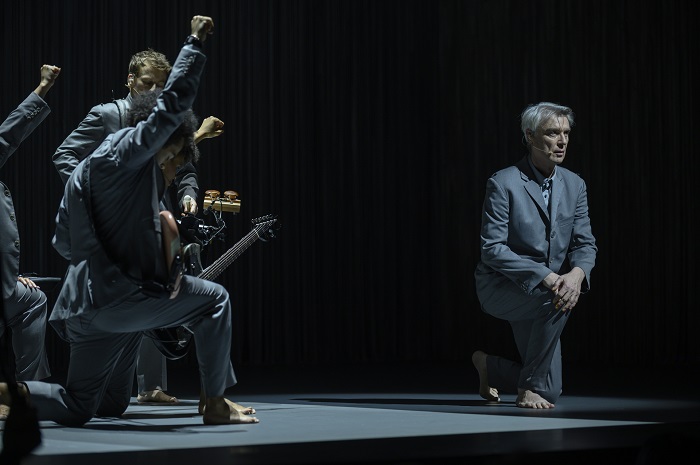 “I also need to change,” Byrne admits when telling the story of contacting Monáe for her permission to perform the song, and he fades into the background during the performance, allowing Black bandmates Kuumba, guitarist Angie Swan, and bassist Bobby Wooten III to step forward as they say the names of Black Americans killed by police or with police complicity, including Eric Garner, Trayvon Martin, Botham Jean, Freddie Gray, Atatiana Jefferson, Sandra Bland, Sean Bell, Marielle Franco, Emmett Till, Tommy Yancy, Jordan Baker, and Amadou Diallo. In another sobering gut punch, portraits of Ahmaud Arbery, Breonna Taylor, and George Floyd, along with the names of “too many more,” appear onscreen too in an acknowledgement of those who have been killed since this staging of American Utopia.

That “Hell You Talmbout” performance, which comes toward the end of the film, serves as a counterbalance to Byrne’s preceding optimism: a reminder of the all-too-common injustice, brutality, and oppression that too many Black Americans and Americans of color are living with every day. And it’s a reminder, too, that when Byrne and his bandmates and the audience left the theater, they were returning to an outside world that sometimes feels more bad than it is good, more repressive than it is free, more cruel than it is kind. But American Utopia refuses to give up on us, and there’s a cathartic reassurance to that hopefulness. Byrne’s appreciation for his audience, his “Thank you for leaving your homes” hits different now, and until we can safely do so again, American Utopia will do just fine.

American Utopia debuted on HBO on October 17, 2020, and is streaming on HBO Max.

← Conspiracy Theories Sound Better From Desus, Mero and Larry Wilmore | 'I Farted a Lot,' and Other Gems From Rahul Kohli's Twitter Celebration of 'The Haunting Of Bly Manor' →