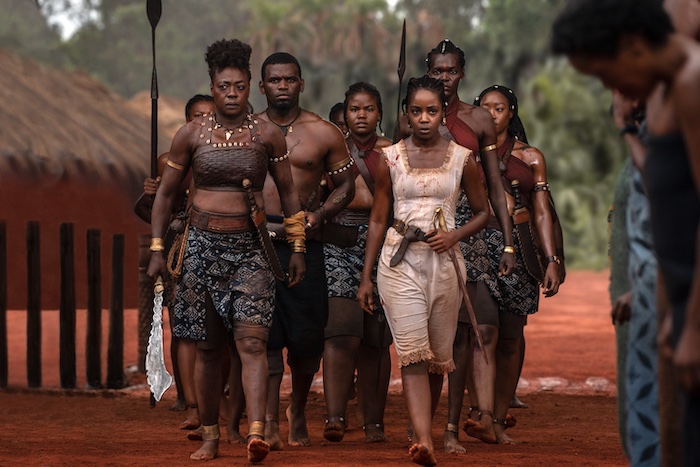 I first heard about the Agojie, the all-female military regiment of the West African kingdom of Dahomey, in a college course on Black women’s history. The professor, a Black woman herself, made a comment to the effect of, “now that’s a movie.” And then paused, before adding, “or maybe it’s better they don’t.” After all, Hollywood does not have the strongest track record with Black history, particularly histories that do not adhere to a scant handful of familiar narratives—plantation enslavement in the Antebellum south or the Black freedom struggle in the Jim Crow era South.

But now, Hollywood has done just that—and remarkably, they have even done it quite well. While the Agojie have already had their impact on popular culture, most notably as a major inspiration for Black Panther’s Dora Milaje, never have they been front and center as they are in The Woman King, the new film directed by Gina Prince-Bythewood and written by Dana Stevens.

Taking place in 1823, early in the reign of King Ghezo (John Boyega), The Woman King explores the world of the Agojie primarily from two perspectives—that of their leader, General Nanisca (Viola Davis), and an eager but impulsive new recruit, Nawi (Thuso Mbedu), abandoned at the palace gates by an apathetic father as an offering to the king after rejecting the wealthy but abusive suitor chosen for her by her family.

As Ghezo considers who he will name “woman king” and share the power and responsibility of the throne, Nanisca leads a war against the rival Oyo Empire, looking to expand and strengthen the kingdom of Dahomey and also seeking personal vengeance against Oyo general Oba Ade (Jimmy Odukoya), with whom she has a painful history. While this already sounds like plenty of plot for a two-hour runtime, the above does not even address substantial plotlines involving the slave trade, Nawi’s family, and a romantic subplot. Stevens’ script does a commendable job of juggling everything without getting any of these threads too tangled, although the narrative does at times, particularly towards the end, feel rather overstuffed.

Overall, The Woman King avoids many of the most tired clichés of Hollywood telling Black stories, though it happily indulges in the kinds of rose-hued historical liberties that such silver screen epics typically do. While the film does directly address at length the unpleasant truth that a rich kingdom such as Dahomey owed its fortunes to the slave trade just as much as the invading European empires they made these trades with, the film goes to great and at times somewhat convoluted lengths to put Nanisca and the other Agojie on the purest possible moral high ground.

This is a film that undoubtedly owes its greenlight to the magnitude of Viola Davis’s star power, but while Davis grounds the film, her solid performance is not the one that ultimately shines brightest here. Mbedu, fresh off her star-making role as Cora in The Underground Railroad, is once again excellent here. As a newcomer to the Agojie, Nawi is effectively the viewer proxy and the true central character of the story, with both the most screen time and by far the most complex character arc, but Mbedu manages to sell Nawi’s at times quite rapid evolution with incredible aplomb. No second of screen time is wasted; even her most quiet moments convey the progression of her journey.

That being said, from the moment she arrives on screen in the opening fight sequence, gouging out an Oyo soldier’s eyes with her claw-like nails filed to immaculate points, it’s Izogie (Lashana Lynch) who truly steals the show from a supporting role as Nanisca’s swaggering, wise-cracking heir apparent. Lynch, in a manner that’s becoming something of a pattern following similarly spotlight-grabbing supporting parts in films such as No Time to Die and Captain Marvel, commands every scene she’s in, managing to be both the comedic relief and emotional heart of the film.

Prince-Bythewood previously demonstrated her capabilities as an action director with The Old Guard and her star shines even brighter here. The battle sequences are not just viscerally engaging and emotionally dynamic, but worked incredibly well into the narrative, furthering character arcs and relationships with a rare elegance.

Its weakest moments are those in which the film goes the most “Hollywood”—not faults enough to keep the film from being enjoyable, to be sure, but dead weight in the form of superfluous and somewhat reductive side plots that grow heavier as the film goes on, culminating in a third act so determined to wrap up about 20 storylines in neat bows that it loses some of the immersive sense of the world and quieter character moments that make the first act in particular so especially compelling.

The Woman King at once feels like a pleasantly nostalgic throwback to a bygone era where historical epics reigned supreme and a bold step in an exciting new direction. A historical epic with approximately one named white character among a large ensemble cast dominated by Black women—and dark-skinned Black women, at that—also directed by a Black woman, is arguably the epitome of a project that would not have a snowball’s chance in hell by traditional Hollywood “wisdom.” And for that, it feels like precisely the kind of film Hollywood needs right now, as it exceeds box office expectations, further evidencing that the prejudiced assumptions underlying so much of this industry’s output to date are rooted in pure bigotry unlinked to any economic reality. (It was noticeable at the screening I attended that my mother was the only white person in the half-full Chicago theater—however, this even more so suggests that Hollywood has arguably been catering to the wrong audiences in terms of who can be counted on to turn up and buy a ticket, given the right motivations.)

History shows that Hollywood loves playing follow-the-leader, and if The Woman King’s path is one the industry deems worth pursuing, I for one am excited to see what follows.

The Woman King is now playing in theaters.


← What Happened to Helen on 'New Amsterdam'? | Where Does 'Cobra Kai' Go In Its Sixth Season? →