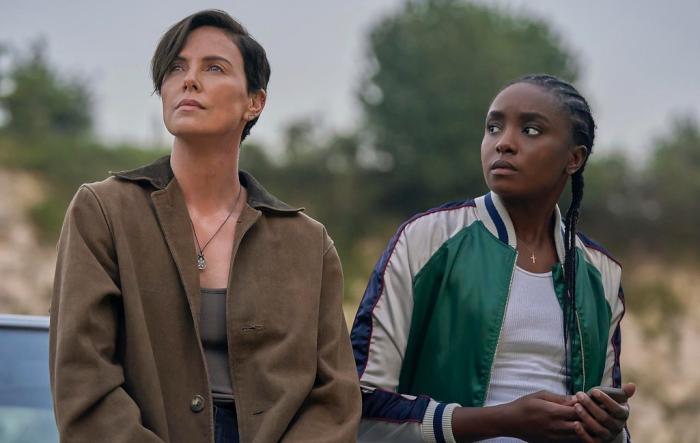 All you might need to know about The Old Guard is that it’s an action movie starring Charlize Theron, the ass-kicking goddess of Atomic Blonde and Mad Max: Fury Road. I knew little else when I sat down to watch this Netflix original. So, its first act threw me for a loop. If you don’t want to know what that is, go watch the movie, then come back. If you need more incentive: know that The Old Guard is helmed by Gina Prince-Bythewood, acclaimed director of Love & Basketball and Beyond The Lights. And it’s her most thrilling film yet.

The Old Guard begins with Theron, dressed in black from toes to the sleek short hairdo that looks like the one Venom-fueled Peter Parker tried to pull off in his infamous dance sequence. Except Charlize makes this work. Lying in a pool of blood, her world-weary voiceover reveals that she’s been in this place near death many times before. With numbed curiosity, she wonders if this will be her last. We’ll revisit this moment after the film has set up her squad and their mission. They are soldiers of fortune who unite to do good, like rescuing kidnapped girls from sex traffickers. On one such job, this curious quartet is ambushed, lit up like the Fourth of July. Then, we’re back to Charlize on the ground. Her heroine appears resigned, almost bored, as she waits for death. Then, she looks to her fallen colleagues. The gaping, bleeding bullet holes in their foreheads shrink, one by one, pushing the offending projectiles out on the cold floor with a crisp ping!

“They’re all Wolverines!” My husband exclaimed as I sat drop-jawed. I hadn’t read the Greg Rucka and Leandro Fernandez’s graphic novels on which The Old Guard is based. I didn’t know we’d sat down for a superhero movie. Maybe that was for the best because Prince-Bythewood boldly rejects many of the emerging genre’s conventions. There are no capes or skin-tight spandex costumes. No super-powered villain with aims of world destruction. No pulling punches or sparing bloodshed to secure a PG-13 rating, and there’s no plucky sidekick to crack carefree jokes during moments of tension. What Prince-Bythewood and Theron have made is an R-rated superhero movie that—like Logan—is for grown-ups who know the burden of great power and its requisite responsibility.

Rucka wrote the adapted screenplay, which begins by centering on Theron’s Andy. Also known as Andromache of Scythia, she is an immortal warrior who has battled through untold ages, fighting for the good of mankind. However, as another century comes on, Andy wonders what good she’s really done. Looking to the news, she’s disheartened by the evils everywhere, feeling that even with her infinite lives she can’t do enough to make a profound difference. Then, a new immortal emerges, creating a race to rescue her. The Old Guard’s focus shifts to Nile Freeman (KiKi Layne), a Black American soldier who is shocked to discover her body can heal deadly wounds in seconds. It’s up to Andy to bring Nile into the fold of this small but fearsome army before she’s found by a shady foe who wants their powers for his profits.

The Old Guard could be viewed as an origin story for Nile; however, the film functions more like the tale of the group, past and present. Flashbacks show us long ago battlefields, where victory demanded a heavy cost of slaughter. Then there are terrible trials where even the immortals could not win. In the present, the Old Guard’s camaraderie is established through chemistry, conversation, canoodling, and a sweet and savory scene about a bit of baklava.

Reunited, one of Andy’s crew hands her the treat with a sly smile. It’s a game between friends. She pops it in her mouth and amid the muted moans of pleasure, she names the ingredients. Theron’s lips wrap around every word as if relishing the taste of each. Then, she names the origins of this particular pastry. It’s a minor moment, but one early on that swiftly sets up who this Old Guard is to each other. They are not just war buddies or super friends. They are family with goofy rituals, deep affection, and a storied understanding of each other’s quirks and virtues.

While The Old Guard gives a great sense of this, its individual characterizations get pretty thin. Andy gets a lot of backstory but not a lot of depth beyond being a jaded badass with a sweet tooth. Matthias Schoenaerts co-stars as Booker, who is defined by being Andy’s right-hand man and little else. Chiwetel Ejiofor brings gravitas to a slim role as a historian of these warriors. The piece’s villain (Harry Melling) is likewise lackluster, summed up by greed and sadism meant to reflect the wickedness of the capitalist goals he holds dear. He works as a symbol, but not as a character or a memorable villain.

Nile is the most richly developed. In some sense, it seems Theron is a sort of Trojan Horse for telling Nile’s story. Bring in the famous A-list action hero to lure audiences into a terrific tale about a Black woman fighting for justice in a ruthless world of selfishness and hate. Those kind of movies don’t get the same support as cat-suited super babes.

While Theron brings a steely star power as Andy, KiKi Layne is transcendent as Nile, delivering a mix of fire and heart that shines from her earliest scenes. As a soldier, Nile aimed for understanding and diplomacy in her mission to protect. Yet this girl knows how to throw down when violence is the only option villains understand. Still, she realizes carnage can be a weight that drags you down, as it has Andy. The two will face off in philosophies and hand-to-hand combat, creating a dizzying tension alongside exhilarating fight scenes. It’s subversive fun to enjoy a superhero movie’s stunts that don’t rely heavily on computer-generated creatures, sprawling sky battles, or combatants decked out in flashy armor.

Yet, for all the incredible character work Layne lays down, my favorite characters were Joe (Marwan Kenzari) and Nicky (Luca Marinelli), two lovers whose romance has lasted centuries. Their same-sex relationship is treated matter-of-factly in the film, not turned into some titillating plot point. They cuddle. They tease, and they fight for each other. While The Old Guard is a drama that throbs with emotion—fear, anger, hope—it’s this love that grabbed my by the heart and wouldn’t let go. The MCU can’t seem to bring LGBTQ+ characters off the page and to the big screen, yet The Old Guard has no qualms about offering a story of gay love and partnership without treacherous tropes like self-hatred, ostracization, or bury your gays. Instead, the film offers a monologue about their love that is so beautifully written and so passionately performed, that I was a mess of happy tears and trembles by the end. And that’s only midway through the movie!

In short, The Old Guard has a lot to offer. Rucka wrote a sophisticated story about responsibility, regret, romance, and what we owe each other. Theron and her castmembers brought it to life with performances that demand every inch of their bodies jolt into action and pulse with emotion. Prince-Bythewood guides all of this pathos and spectacle with a confident hand, never giving in to the pull of what the mainstream superhero movies are doing. Through this incredible collaboration, The Old Guard becomes a superhero movie that offers fresh perspectives and unpredictable plotlines with a wallop of passion that’ll hit you right at your core.

The big boys could take a lesson from Prince-Bythewood and company.

The Old Guard debuts on Netflix on July 10.

← Review: 'First Cow' Crafts a Greed Parable as Wholesome as a Glass of Milk | Review: Haunting Horror 'Relic' Will Make You Want to Call Your Mother →