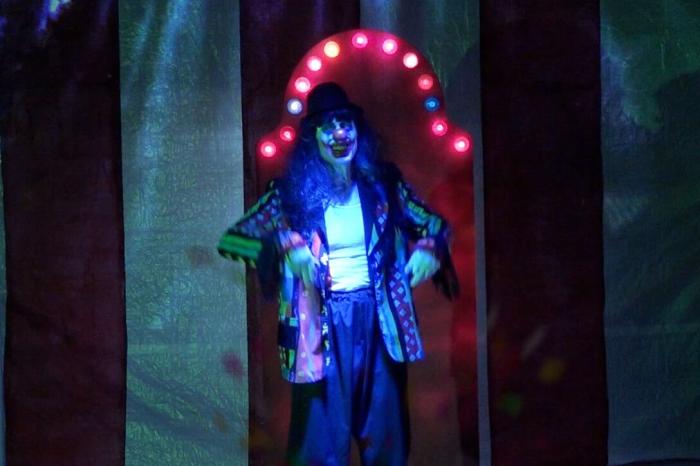 Review: 'Clownado' Is Somehow Even Worse Than You'd Expect

Clownado is no VelociPastor. You probably gathered that from its title, which doesn’t even attempt wordplay as much as it attempts to conjure up some messy mash-up of Killer Klowns from Outer Space meets Sharknado. Yet this deeply sloppy B-movie won’t stop there. It also wedges in elements snatched from Tremors, Twister, Independence Day, as well as titties with teeth, and a black Elvis impersonator. And sure, the very go-for-broke too-muchness of it all might sound like fun on paper, but in execution, Clownado is a grueling, unfunny watch that—at best—is a cruel joke on the audience.

An intro scene offers an overgenerous amount of backstory along with lines like, “You’re milk that’s gone sour, baby, and I don’t like the taste.” All this is delivered in hammy noir-styled accents. There’s murder, mayhem, and the midnight circus that involves titty-torture and a gang of ghoulish clowns. Then, the wounded wife goes to her witch friend to brew a spell to summon rage demons to wreak vengeance on her hateful hubby. But things don’t go as planned. Instead, he and his insane clown posse are imbued with crazy tornado powers and begin attacking the locals, which include a kindhearted redneck, an angsty teen runaway, a sassy stripper, the aforementioned Elvis impersonator, and a pair of storm-chasers who are in over their heads, and then eventually another redneck whose wild pilot reputation proves crucial to saving the world from invading aliens killer tornado clowns.

I worry that I’m making this sound so bad or so stupid that it must be silly fun. Clownado is a slog. As outrageous as its contents sounds, it’s paced like a funeral procession that gets lost in a dodgy part of town. One scene after another drags on with characters frequently screaming inane questions at each other or unfurling more overwrought backstory of abandonment, betrayal, and bad choices. Such scenes might be meant as cheeky mocking of the melodrama, but the cast is all over the place with accents and tone, so it’s hard to pick out the intentionally hackneyed acting for the just plain awful.

There’s little sense of momentum to the plot, and little sense to the plot at all. There’s no logic applied to the powers these demonic clowns possess. Randomly, they have lightning powers or gaping maws on their bellies and snapping jaws on their breasts. The only consistent thing is their love of ripping people apart and sticking their hands in innards made of Jell-o. There’s plenty of senseless graphic violence in Clownado. By that, I mean that there’s zero sense to any anatomy in that graphic violence. Necks can be squeezed like tubes of toothpaste. Legs can be ripped off to spill out a flood of jiggly pink goo. It’s all gory and very stupid. To relish in both, Sheets has tediously indulgent close-ups of his clowns rubbing fake blood and red Jell-o on their palms, faces, and bare breasts. It’s not shocking. It’s not funny. It’s just tiresome. On top of all this, this cheap and stupid eyesore of a movie is so poorly lit that much of its action is difficult to even make out. My recurring concern of “what is happening?” eventually soured to “who cares?”

Recently, I praised the willfully bonkers VelociPastor for delivering the absurdity and silly spectacle we crave in a B-movie, while also offering a sly spoof of the form. Clownado doesn’t attempt anything so interesting, entertaining, or self-aware. It’s just stupid.

Don’t be fooled into thinking it might be fun.

← Trailer For 'Killer Sofa' Promises Furniture That Kills | Reddit Asks the Question: 'What Beloved Childhood Meal Do You Now Hate As An Adult?' →