I’ll give this to Clint Eastwood: The man can still surprise me. In The Mule, it was with a 90-year-old gleefully indulging in a Mexican Cartel-facilitated threesome. In Richard Jewell, it’s with his absolute character assassination of a journalist who can’t defend herself because she’s dead. The clearest villain in Eastwood and screenwriter Billy Ray’s film, Atlanta-Journal Constitution reporter Kathy Scruggs is portrayed as an image-obsessed floozy who slept her way to stories and demonstrated no original thoughts of her own, serving only as a mouthpiece for local police. On the one hand, I’m not that shocked that Eastwood would pin all the problems of a righteous man on a superficial woman. But on the other hand, to this degree? Damn, dude.

Richard Jewell tells the story of the titular man (Paul Walter Hauser), famously accused by the F.B.I. and named by the Atlanta-Journal Constitution as the bomber who targeted the 1996 Summer Olympics in Atlanta, setting a pipe bomb that killed one person, caused the death of another, and harmed more than 100 more. The film operates also as a sort of biography of Jewell, following him for a decade before the bombing to fill in the kind of man he was. Highly aware of details, like when he’s working as a supply room clerk and notices that lawyer Watson Bryant (Sam Rockwell, so good and thankfully taking a break from playing racists) is running low on tape and Snickers bars, so supplies him with both. Prone to braggadocio and self-aggrandizement, like when he brags about his prowess at a shooting video game to Bryant and tells him he’s preparing for a career with the Secret Service. And totally willing to step beyond the lines of polite society—and legality—to fulfill his fantasies of being an agent of the law. While working as a security guard at Georgia’s Piedmont College, he pulls over people, goes into students’ rooms without a warrant, and shoves the “college brats” around.

“I believe in law and order, sir. You can’t have a country without it,” Jewell insists, but he’s utterly unaware of how his behavior comes off to other people. It doesn’t help that his mother, Bobi (Kathy Bates), basically encourages him, or is at least unaware of how her motherly support is enabling him. Although she doesn’t like them, she allows Richard to have a bedroom full of guns. Although she knows that Richard was fired from his job as a sheriff’s deputy years ago, she turns a blind eye toward his overstepping various boundaries in jobs since. When Richard continues to treat every position as if he’s a hero in a story, she lets him see the world in such starkly black-and-white terms. “Still a good guy warding off the bad guys, aren’t you?” she reassures him when Richard goes off to his job working security at Centennial Park during the Olympics ceremony, unaware that he’s walking into a situation that will change both their lives forever. 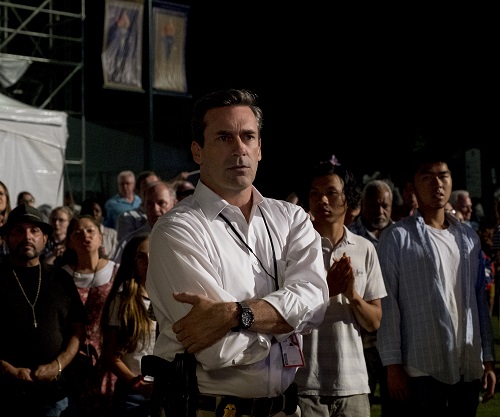 Richard isn’t the only person at Centennial Park that night: Also in attendance are F.B.I. Agent Tom Shaw (Jon Hamm), who resents the assignment of basically working crowd control, and AJC reporter Kathy Scruggs (Olivia Wilde), whom the film introduces as a hysterical, foaming-at-the-mouth woman berating other journalists, loudly planning her boob job, and flashing middle fingers at her editors. The film uses those two as representations of the forces that will immediately latch onto Richard once he spots a bomb, alerts authorities, and ends up saving hundreds of lives. Shaw is the errand boy of the F.B.I., targeting Richard when they can’t come up with any other theories, and Kathy is the conniving, manipulative seductress of a journalist, passing judgment on Richard and magnifying that verdict without even knowing him.

That seems sort of evenhanded, right? Well, it’s not! Ray’s script obfuscates the F.B.I. agents with fictional names but makes sure to identify Scruggs, who is shown as having her own plan for how the Jewell story will boost her name and her career. The F.B.I.? They were just doing their jobs, and they made a mistake. Ray’s script, in fact, has Watson say this to Richard, labeling Shaw and a few other members of the F.B.I. as “three pricks that work for the United States government.” The entire bureau isn’t culpable; just three guys. But Kathy Scruggs? That bitch got what she deserved. Watson brings Richard to the newsroom to embarrass Kathy, to shame her in front of all the colleagues we had previously seen her disparaging and mocking. During a press conference later in the film, when Bobi cries about the treatment of her son, we see Kathy crying too, because women are so emotional, obviously. That’s all on top of how the film clearly says that Kathy sleeps with sources to get information, heavily implies that she flirts with her colleagues to get them to write her stories for her, and suggests that she does the same with police officers to gain tips.

The movie hates this woman, and it’s amazing how much time the script devotes to tearing down Scruggs, and to painting the media obsessed with the Jewell story as predominantly populated by headline-chasing women. (Watch closely and you’ll notice that nearly every journalist who hassles Jewell as he’s coming and going from his apartment is a woman.) Honestly, it’s about as much time as the movie devotes to absolving Jewell, whose obsession with the police and F.B.I. and whose single-minded idolatry of authority figures is never questioned. There would almost be something sly and subversive in a film that presents Jewell as a victim of the very government he so loved, as a man whose public downfall was engineered by the very institutions he so admired, and Richard Jewell almost goes there. But the film pulls back from actually critiquing any element of the U.S. government and the powers that be, instead choosing to lay everything bad at Scruggs’s feet and making her the focus of overwhelming negativity toward and mistrust of the media.

She seduced an F.B.I. agent for information. She flashily displayed the information in front-page stories, she planted herself in press pools outside of Jewell’s apartment, she broke into Watson’s car to try and squeeze more details. The misogyny overshadows the actually successful elements of Richard Jewell: excellent supporting turns from Rockwell and Bates; a believably gullible performance from Hauser, who transforms the self-involvement we saw in I, Tonya into delusion of a different type; and the horrifying tension of the sequence beginning when we spot the bomb-filled backpack under a bench in Centennial Park. Eastwood develops stomach-dropping nausea with that harrowing scene, and the film would have benefited from more of it, rather than spending so much time smearing Scruggs. Richard Jewell was an American hero, but the film named after him is more concerned with making Kathy Scruggs an ambition-chasing villain in a too-tight skirt.

Oh, and why didn’t I include any pictures of Wilde as Scruggs in this review? Because Warner Brothers doesn’t make any official images of her available on their press site for the film. Just in case it wasn’t clear already, especially given the studio’s statement on the portrayal of Scruggs, what the agenda here is.

← The 5 Biggest WTF Moments from 'Star Wars: The Rise of Skywalker' | WTF Did You Just Watch? All Your Outstanding Questions About 'Cats' Answered →