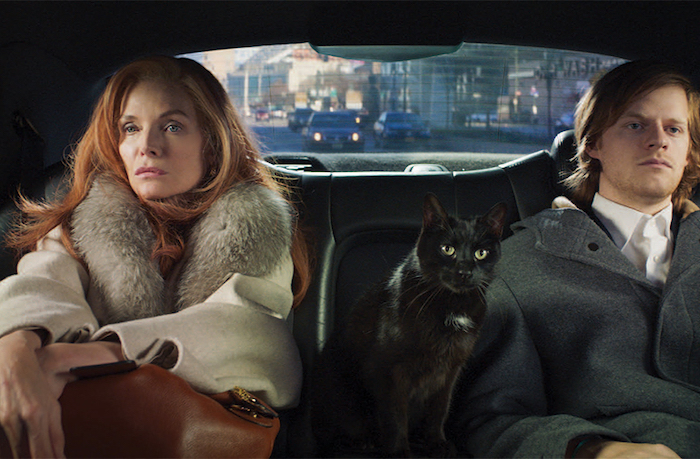 Michelle Pfeiffer stars as Frances Price, a widowed socialite who also seems to barely tolerate socializing—or anything else, for that matter. After she waited several days to report the sudden death of her estranged, even more emotionally defunct husband over a decade earlier, she became something of a loner, save for the ever-present company of her grown son Malcolm (Lucas Hedges), who never really had a hope of having any sort of emotional competence. He not only lives down to what one would expect considering the circumstances of both nature and nurture in his upbringing but subsides this very low bar as a fundamental invertebrate. What does he want in any given scene or from life in general? I have no idea. He’s just sort of there and spineless, like a human-shaped sea sponge. Hedges is a very talented actor and has demonstrated his chops elsewhere, but he is not a miracle worker. “What is the point of you?” I actually pondered aloud at one point. I received no reply.

Anyway, in addition to being widowed and fashionably reclusive, Frances has also recently run out of money. But she’s the level of rich that’s poverty-proof because going broke means cruising on over to France and living rent-free in an acquaintance’s spare Parisian apartment forever. Malcolm the sad mannequin comes along because he’s in her orbit and doesn’t have the wherewithal to qualify for true free will. Never does the prospect of either of them doing anything as plebian as seeking employment get so much as a passing mention. Aimless rich people remain aimless, just on the other side of the Atlantic in a more cash-poor way. French Exit is the sort of film that’s relatively spoiler proof because there are very few developments around to spoil.

The deeply maddening thing about French Exit is that all elements of it are competent, they’re just not ultimately all that meaningful or even coherent. Director Azazel Jacobs clearly knows how to make a pretty movie. Patrick deWitt’s definitely capable of writing a script that bears a very clear signature, which is a relatively unusual ability. Yet, the two don’t ultimately mesh.

The dialogue is overwritten to the point of awkwardness. It feels like it’s trying to prove just how clever and witty it is in every single scene while unfortunately forgetting that old adage about brevity being the soul of wit, which exists for a reason. You can imagine basically every line of dialogue accompanied on the page by the parenthetical “wryly.” There’s a stiffness to it that feels like something that could work in a novel (which fits, considering deWitt adapted it from the novel of the same name that he also wrote). For example, lines like “to be young-ish and in love-ish” and “I want you to know that I am trying to fall out of love with you” feel quirky in a way that could slide in a novel, but when actually spoken aloud they just do not flow well, even when Michelle Pfeiffer says them. All that said, it’s the sort of thing that could still work as a stylistic choice if the visual storytelling was equally stylized and quirky, only it isn’t. While there are moments where the imagery becomes exaggerated enough to match the dialogue, most of the time the visual storytelling errs far more towards the subtle and naturalistic. This movie feels like an object being pulled with equal force in opposite directions—things cancel out and it goes nowhere.

But perhaps the most frustrating thing about French Exit is that watching it leaves me wondering why it was made, and who it’s supposed to be for. It’s like Schitt’s Creek as a movie if the eponymous Podunk town was Paris, the motel became a millionaire’s vacation home, and was too sophisticated to crack an actual joke (laughter causes laugh lines, you know). Am I supposed to care about these characters? They may sail across the Atlantic but there’s no real journey here in a story sense.

The one very good point French Exit does have to make is that Michelle Pfeiffer continues to be a star and begs the question of why she is not starring in more things. It’s just irksome that it’s a situation that boils down to having to choose between watching a film with Pfeiffer in it or one with a story that’s any bit engaging. Asking to have both at the same time does not feel like it’s asking to much of the Universe, although it has of late failed to provide. Fingers crossed for next time.

French Exit is currently playing in limited release in New York and Los Angeles, and will expand nationwide April 2.

← What The 'Unsolved Mysteries' Segment About Liz Carmichael Tells Us About 'The Lady And The Dale' | Review: 'To All The Boys: Always And Forever' Falls Prey To Main Character Syndrome →