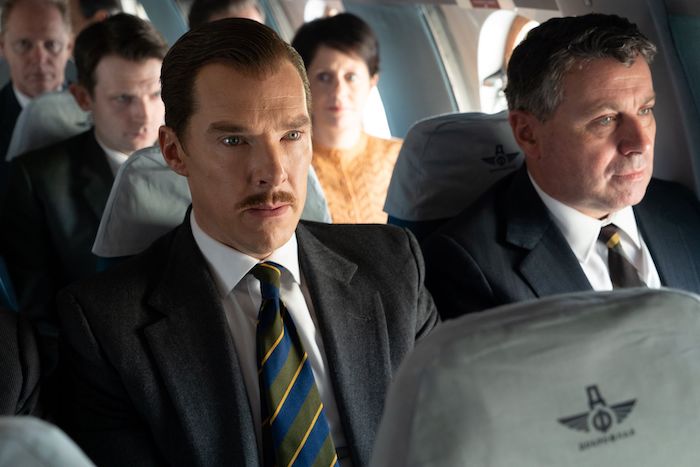 The Courier is based on a true story. Unfortunately, it is one of those films that thinks being based on a true story is enough to warrant its existence, because there’s really not much else here. It’s a Cold War spy drama that’s with archetypal characters you’ve definitely seen a hundred times before, and themes so generic they’re literally not worth discussing any further.

Benedict Cumberbatch stars as Greville Wynne, a British businessman and Norm McEveryman who gets recruited by MI6 to smuggle out confidential Soviet info provided by turncoat Oleg “Alex” Penkovsky (Merab Ninidze) back to the UK and their American colleagues, represented by CIA agent Emily Donovan (Rachel Brosnahan). She is a paper-flat perfectly coiffed woman of steel that feels like Jessica Chastain’s archetype of choice written in lazy shorthand. The Cuban Missile Crisis inches closer and closer on the horizon and the movie argues maybe it would have gone down differently if it hadn’t been for Wynne. However, a lot of the specifics of why exactly are a bit underwhelming, considering the whole point is that Greville doesn’t really know what he’s doing, or the information that he’s actually carrying. The rationale behind the entire film’s existence seems to be that Greville’s contribution is worth acknowledging. While that argument is valid, it feels more suited to an interesting Smithsonian article than a feature-length film. (In this regard, it feels very akin to another recently released 20th-century British period piece, The Dig.)

To that end, and in the name of raising the personal stakes of the journey for Greville, the film adds an aggravated-sigh-inducing subplot involving Greville’s wife Sheila (the always wonderful but here woefully miscast Jessie Buckley), who presumably must have had their son Andrew (Keir Hills) around age 18. Because women in their 40s don’t exist. Anyway, Sheila can tell her husband is keeping secrets. So, she starts to think he’s having an affair (he’s been unfaithful before). Then once sh*t starts to hit the fan, she realizes he’s out there trying to be a big damn hero and feels bad. Buckley makes the absolute most of the material, but there’s no totally rescuing a staid storyline from itself.

Then, there’s Greville’s main arc. The thing about spy thrillers played straight is that they really ought to be smart. Espionage is supposed to rank with six-dimensional chess in terms of difficulty. Yet, the whole point of Greville’s character is that he’s Joe Normal, and not especially adept at spying. He’s not operating on that level, and neither is the film. It does a great job of filling the dialogue with convincing business jargon that can feel a bit like watching a dramatic rendition of a legal contract. But in terms of storytelling fundamentals, there’s some real Swiss cheese logic going on.

The film relies on the idea that Greville responds to MI6’s call to action reluctantly. For an extended period, he wavers and even signals an intention to stop playing along. However, the whole gambit fails to deal with a fundamental inconsistency. The argued selling point of the film is the idea that Greville’s a totally normal businessman thrown into this extraordinary situation. But when he’s on the fence about being involved the film tries to sell the idea that the whole mission falls apart without him (“It has to be you,” he is told repeatedly). Either he’s an everyman or The Chosen One. These two concepts really are mutually exclusive. The Courier tries to have it both ways; it’s not very effective.

Miscasting aside, he performances are all compelling. It will always be amusing to see Cumberbatch pretend to be anything other than pristinely blue-blooded. Director Dominic Cooke’s execution is The Courier’s saving grace. Sean Bobbitt’s masterful cinematography is easily the most exciting aspect of the whole thing. There are some scenes in this film that genuinely look like Edward Hopper paintings. Mesmerizing shot choices keep the film afloat through sequences that would have been an utter chore to slog through with more generic visual storytelling.

If Cold War-era spy movies are your comfort food, The Courier is worth your time. But if a new Cold War drama that feels like a chopped salad made from old Cold War dramas with no dressing whatsoever does not sound enticing to you, this film is one you can skip.

The Courier is now in theaters.

← Quick Question: Are Ana De Armas and Ben Affleck Dating Again? | 'Q: Into the Storm' Offers the Sympathetic Profile of QAnon Supporters No One Asked For →