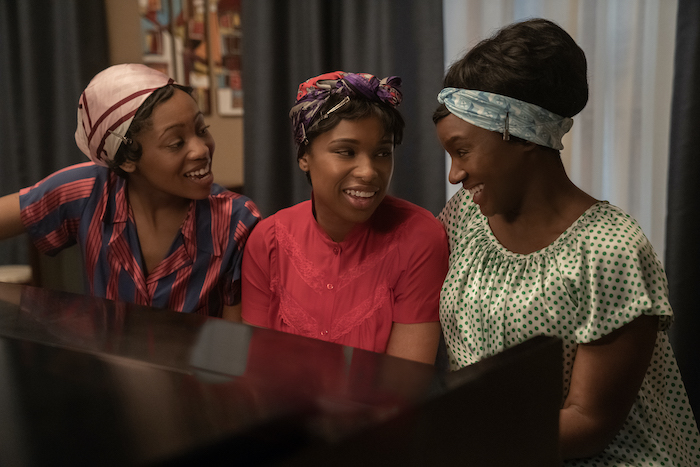 Review: Aretha Franklin Biopic ‘Respect’ Serenades the Queen of Soul in a Familiar but Well-Executed Tale

Aretha Franklin, Queen of Soul, general GOAT, and one of the most distinctive vocalists of the past century, is the sort of star who shined so brightly that it’s hard to believe she was not celebrated in celluloid prior to 2021. Then, of course, with the Universe and the entertainment business being as they are, this year there are suddenly two: First, the tepidly received National Geographic miniseries Genius: Aretha, released this past spring starring Cynthia Erivo, and now Respect, the long-gestating biopic with Jennifer Hudson in the starring role. Franklin herself was involved in developing the project prior to her death in 2018 and tapped Hudson to star—a point that Respect’s marketing seems especially keen to promote, perhaps to angle it as the more authoritative account.

Helmed by veteran theater director Liesl Tommy in her feature debut, with a script from Tracey Scott Wilson, Respect is a biopic’s biopic—it is the classic formula through and through, well-executed and exactly what one might expect, for better and for worse. It starts with Franklin’s young adolescence in early 1950s Detroit, setting up both key obstacles and motifs for the film to come, then follows those threads through her rise to stardom in the 1960s. Things come crashing down and she hits a crisis point late in the second act (the end of her first marriage in the late 1960s and a mounting reliance on alcohol), but then rises like a phoenix from the ashes to shine brighter than ever, with her 1972 recording of the Amazing Grace live gospel album serving as the triumphant finale. It’s textbook.

That said, textbooks do exist for a reason. Respect is functional and effective, if a little too transparent about the mechanics of it all. The degree to which every narrative element serves a clearly signaled purpose gives Franklin’s life a glossily plastic, predetermined sheen. “Don’t let nothing come between you and your music—music will save your life,” a family friend sagely advises young Aretha, and everything, from the line itself to the way the scene plays out to how the line itself is delivered, lets you know that this will definitely be repeated, verbatim, later in the film. And sure enough, it is.

To be clear, this quality is true of all biopics that follow the classic “life story” structure—at least, the better ones. It’s an inevitable consequence of the sheer amount of condensation required to cram the better part of someone’s life into two and a half hours. The glossy neatness of it all means it’s intelligible; the only other direction to go in while trying to cover so much ground in so little time is to swan dive into incomprehensibility. It’s why the standard biopic structure has remained consistent since the dawn of the Sound Era in a way that’s truly remarkable; they’re like the horseshoe crabs of the movie world.

For all that Respect is structured following a well-established pattern, the story thankfully doesn’t feel fully on autopilot. While belonging firmly within the “tortured genius” biopic lineage, Respect takes the meaningful step of not forcing a causal relationship between the two—a rare but welcome break from tired cliches. The sudden death of her mother from a heart attack at just 34 years old, a few weeks before Aretha’s 10th birthday, the sexual assault that leads to her first two pregnancies at the ages of just 12 and 14, and her fraught relationship with her mercurial, charismatic-when-he-wants-to-be but overly controlling Baptist preacher father C.L. (Forest Whitaker)—the film addresses all of these and how they impact Franklin throughout her life, but never implies that these traumas somehow were necessary precursors to her genius. This delicate handling also comes through in Tommy’s direction. The film shows enough of these events to not diminish or undermine their significance while also understanding the value of discretion, and not succumbing to the trauma-porn pitfalls of even well-intentioned films following “more is more” sensibilities when it comes to depicting rape and abuse.

Respect flourishes most in the areas where biopics often find their strength: performances and production design. Biopics, and particularly the decades-spanning, “life-story” sort of biopic, are—and always have been—actor vehicles. They exist to showcase one known entity transforming into another, and Hudson is phenomenal as Aretha Franklin. Even if Franklin herself hadn’t tapped Hudson for the role, it still would feel like a no-brainer. She has the look to play Franklin, the vocal cords, and solid acting chops; the pairing feels like it should be a match made in heaven, and it is.

The rest of the cast is also solid. Acting newcomer and viral singing sensation Skye Dakota Turner as young Aretha is a remarkable find. Marlon Wayans is sufficiently charming and seductive as Aretha’s abusive first husband Ted White to make his appeal to her compellingly apparent, even with all the red flags flapping in the breeze. Of all the cast, Whitaker as C.L. comes across as the bumpiest fit, at least early in the film. For all his acting talents, the best efforts of a makeup team, and a wig that tries its hardest, in the 1950s-set scenes of Aretha’s childhood, Whitaker does feel decidedly like a 60-year-old man playing a role meant to be 30-something. That C.L.’s mother is spry enough to not just raise Aretha, but later Aretha’s children, makes it seem like she must be at least 100 years old by the last time we see her for the math to add up. Once the film jumps to Aretha’s adulthood, though, it works fine, and Whitaker handles the most complicated character in the film admirably.

Respect is playing in theaters as of August 13.


← A Midseason Review of HBO Max's 'Gossip Girl' Reboot | Review: 'Don't Breathe 2' Had Me Gagging, But Not In The Good Way →