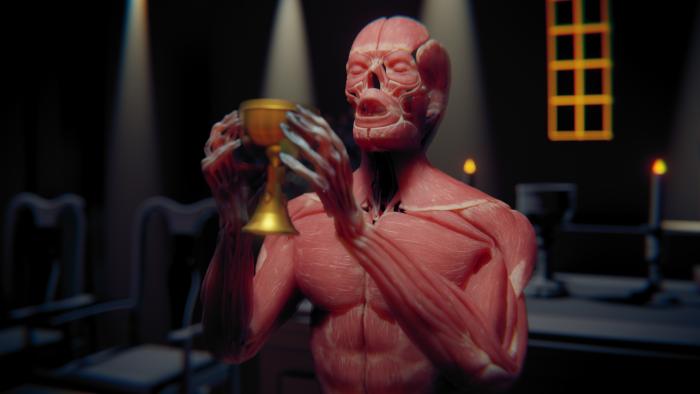 Review: 'A Glitch in the Matrix' Ponders The Really Real, Like Whoa

In the year 1999 humanity was presented with a pair of pills. “Red or blue,” the prominently sunglassed man asked. Like the two paths noted in a wood, one way marks ignorance the other knowledge; the apple in the Garden of Eden simmered down and encased in gelatin for our pharmaceutical-friendly present day. Did we think much of alternate realities before March 31st of that year, when the Wachowskis shot the concepts of Simulation Theory into popular culture like a slo-mo bullet slicing through the air? Who were we then versus who are we now, and how do we get back to a pre-Neo simplicity? (Neo-Classic, if you might.)

These questions and many many many more are asked by pop-documentarian Rodney Ascher’s latest movie-adjacent documentary A Glitch in the Matrix, which comes nine years after Room 237, his heady leap into the bizarre conspiracy theories that surround Stanley Kubrick’s classic The Shining, and six years after The Nightmare, which dissected sleep paralysis to terrifying effect. Glitch feels especially of a piece with the Kubrick doc, although The Matrix here is more of an entry point than it is Ascher’s central text. And it’s not a bad corner of story-telling to claim, the ways our reality (or should I say realities) are shaped, re-shaped, and misshaped by pop culture. Indeed it only feels more scarily relevant with every passing year of Comet Pizza wishes and QAnon dreams.

Movie references aside, Glitch is Ascher’s most explicit deep-dive into the subject, interviewing a handful of people (several of whom have been computer-animated into 3D avatar form by comic-artist Chris Burnham alongside a team of professional pixel sculptors) who’ve become convinced to varying degrees that we are all living inside of a computer simulation. Boiled down to its crudest form, the thinking goes that somebody somewhere is playing us like a video game. Or we are the only real person, playing the world like a video game. It’s like the last act of David Cronenberg’s eXistenZ- if you introduce alternate realities inside alternate realities inside alternate realities at some point the real reality becomes unmoored. As Morpheus asked,”What is real?”

As with Cronenberg’s film and as with the questions at the heart of the Wachowski Sisters’ story, this concept becomes more unsettling the further you get tangled up in it- the last act of Glitch takes a look at the true story of Joshua Cooke, whose own trench-coated obsession with The Matrix led him down a deeply disturbing and violent path in 2003. Cooke seems to have had good intentions in his participation with the film. He says he wants to warn young people not to lose their grips like he did. Yet, there’s something somewhat grotesque in the way the film sensationalizes his retelling into animated video-game play. No doubt grotesqueness was the intent. On-screen violence should disturb, not coddle or numb. But there’s a point where representation, especially of real-world atrocity, crosses from necessary to suspect, and I’m not convinced Glitch doesn’t violate that oath with this passage.

Indeed the film feels like it has a few blind-spots. For one it’s only about halfway through the sausage-fest that we’re reminded women not named Carrie Ann-Moss or Trinity exist, when The Wire magazine writer Emily Pothast shows up. Naturally, it’s on her to be our voice of emotional and moral guidance. She does fine work though, providing a service the film up to that point’s been desperately needing, i.e. blowing holes through the pot-smoke atmosphere of dorm-room philosophy 101 in which we’ve been trapped up.

Not that there isn’t fun to be had getting stoned on big ideas and saying “whoa” a lot. We’ve all been there. As an introduction to Philip K. Dick, Plato through Descarte, Glitch makes an entertaining case. It’s at its best when blending many theoretical influences into a delicious pop smoothie of animation and wit, of which there is plenty. It walks up right to the present, where the ideas The Matrix popularized twenty years ago have born some unfortunate fruit. It must be said that questions of “what is really real?” in 2021 don’t feel quite as fun when frothing disconnected masses are now using them for their justifications for insurrection and chaos. Glitch, to its detriment, doesn’t quite go there, but it provides a good map of the path we took through the woods to end up inside a reality we might wish to step outside of.

A Glitch In the Matrix played as part of the Midnight slate at Sundance 2021. For more on the festival and how you can enjoy it from home, check their website.