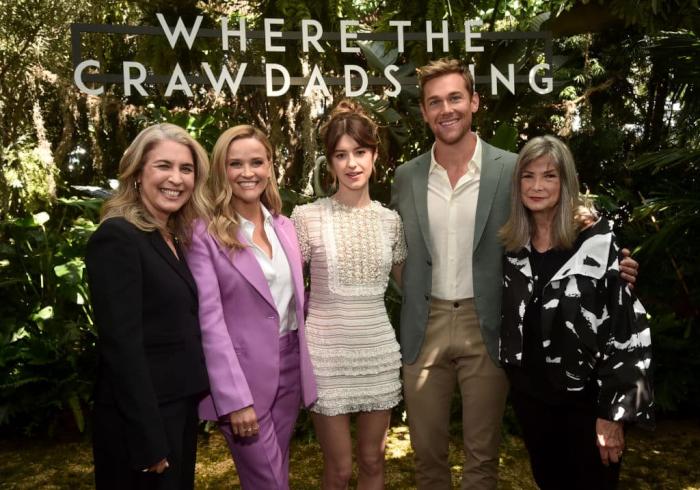 This week sees the release of the film adaptation of Where the Crawdads Sing, the multi-million bestselling novel by first-time author Delia Owens. Published in August 2018, the book became one of the decade’s undeniable literary smash hits. The story follows a young woman who is raised along in the marshes of North Carolina, a loner more at home among nature than her fellow humans. When she is accused of murder, the trial becomes the most obsessed-over event in the state, with the small coastal town she refuses to call home turning it into a referendum on her very being.

As of January 2022, the book has sold 12 million copies worldwide, which outnumbers The Help and The Lovely Bones. It sold more print copies in 2019 than any other adult title, fiction or non-fiction. In 2021, three years after it was released, it was still one of the top 20 biggest-selling books of the year, with sales passing 625,000 copies. At a time when publishing finds itself struggling, Owens broke the rules. Helping her in her journey was none other than Reese Witherspoon and her Hello Sunshine Book Club. Witherspoon picked the novel for her September 2018 read, and soon the covers were emblazoned with ‘Reese’s Book Club’ logos. Witherspoon’s production company, also called Hello Sunshine, purchased the film rights to the novel, and she serves as its main producer.

Celebrity book clubs have become more common in the post-Oprah age, although Ms. Winfrey is still one of the undisputed queens of this trend. Witherspoon’s venture, however, has proven to be wildly popular, arguably surpassing Winfrey’s in terms of cross-synergy power. Hello Sunshine picks several books a year, including YA options, almost exclusively by women authors. There are some crossovers in terms of genres and themes with Oprah’s classics, which often focused on communities and families in peril. Witherspoon’s, however, are a touch fizzier. They’re more beach-read options than literature class picks. This isn’t a bad thing. I personally think it’s really cool how often she picks romance novels and elevates the likes of Jasmine Guillory to audiences who may have previously shied away from the genre. Like Oprah, you may find helpful lessons to be learned, but you’re not going to be told to read Tolstoy or even Joyce Carol Oates.

I’ve written before about how the book club allows Witherspoon to build a strong foundation of content for future adaptation purposes, often with herself in a starring role. Her company adapted Celeste Ng’s Little Fires Everywhere after it was a Hello Sunshine pick. She initially purchased the rights for Gone Girl with hopes of playing Amy Dunne. Even in projects she doesn’t take a leading role in, you can tell where she experienced a moment of self-identification with a character, like Kya in Where the Crawdads Sing or Daisy Jones in Daisy Jones and the Six. At the very least, as an award-winning actress and mega-producer, she has a sharp eye for what makes a story intriguing, particularly for women in and outside of the entertainment industry.

Where the Crawdads Sing is catnip in that regard: an intense but readable drama with crime elements that focuses on a young spirited woman with a dark past; lushly described landscapes and an ensemble of memorable characters; thematic focus on ideas of identity, home, nature, and mistrust; and a sting in the tale in the third act. It’s not dense or written in a difficult-to-absorb style. It’s accessible while taking on some hefty topics. I read pretty quickly, admittedly, but it’s not hard to see how one could get totally sucked into this novel, even if you weren’t the type of person to read three books a week. Everything breezes along at such a speed that you can’t help but power through, long before you start to second guess plot or character details of a questionable nature.

Owens herself comes with the kind of ‘fairy-tale story’ that was easy to tie into her novel’s success. After studying zoology and earning her Ph.D in animal behavior, she and her then-husband moved to Africa and made camp in the Kalahari desert of Botswana. The pair of them moved across the continent studying animals in their natural habitats and wrote several books and journals on their work. So much of the marketing appeal surrounding Where the Crawdads Sing has honed in on Owens borrowing from her expertise to create a portrait of the wonders of the natural world, with herself as a proto-Kya.

That glowing image has remained surprisingly dent-free, even as it came to light how the Owens were expelled from Botswana, and later accused of operating a ‘shoot to kill’ policy against poachers. ABC News aired a report in 1996 centered on the killing of a poacher in Zambia, allegedly committed by Delia’s stepson, Christopher Owens (the family has denied all accusations of murder.) Long before her novel was published, Owens and her now-ex were accused of having ‘archaic ideas’ about the African people. One critic summed up their philosophy as ‘nice continent, pity about the Africans.’ This brand of environmental racism is dishearteningly common in the field (check out the history of Dian Fossey for more information.)

None of this is a secret. It’s been heavily covered over the decades, a long time before Where the Crawdads Sing landed on shelves. It hasn’t garnered steam beyond a couple of articles and some social media discourse. This is partly because the monopolized media world doesn’t allow a lot of column inches towards things that will hurt their bottom line (and they’ve certainly never cared much about racism.) The image of Owens as the Southern tomboy who saw the magical world of nature, fought for the animals, then told an inspiring story is publicity gold (and a strong parallel toward the way that Witherspoon has sold herself as a gal from the South who loves whiskey and tradition and won’t take no sass.)

Doing so also ignores the way that racism permeates through Where the Crawdads Sing. The two most prominent Black characters in the novel are Jumpin’, the owner of a local gas station for boats, and his wife Mabel. They and Kya become friends, with Kya trading mussels and fish for money and gas. Many reviews have described Jumpin’ and Mabel as being written as racist stereotypes, particularly in regards to the jumbled dialect that Owens writes for their speech. In the context of Owens’ past and the accusations made against her, these characters read as far more sinister than the anodyne Helpful Black People cliché she may have hoped to evoke. A story of murder, and said act being justified, starts to sour when you know Owens’ past.

And said past is not dead. As noted by The Atlantic, there is no statute of limitations on murder in Zambia. Delia, Mark, and Christopher Owens are still wanted for questioning related to the killing of the alleged poacher, as well as other possible criminal activities in North Luangwa. I’m not sure this story would make its way into Reese’s Book Club, but the reality of Owens’ life, inspirations, and whitewashed narrative are an integral part of the novel that has been elevated to the status of cultural icon over the past few years. It’s just that one side of this is far easier to package for wider (default white American) audiences than the other.