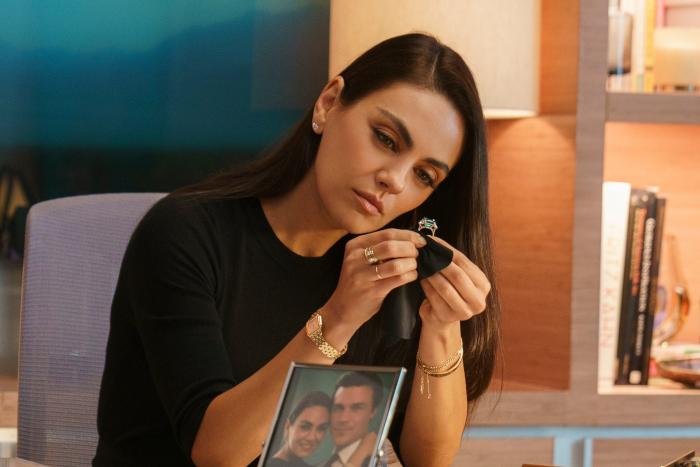 The Luckiest Girl Alive, which stars Mila Kunis and Chiara Aurelia as the older and younger version of Ani Fanelli, respectively, hit Netflix a couple of weeks ago and has maintained a top five position on their movie charts since. Sara reviewed it earlier this month and, while acknowledging the good parts, she felt that it might have worked better as a miniseries.

Having read the Jessica Knoll book upon which it is based, I don’t disagree. Eight episodes — or even six episodes — might have been too long, but it needed four hours, and four hours is too long for a film. What’s missing primarily from the film is the more intimate relationship between Ani and her teacher Andrew Larson (Scoot McNairy) — it wasn’t quite sexual, but it was borderline. I also felt like the film underplayed the role of bullying in the eventual school shooting. Being bullied obviously is no excuse to shoot up a school, and while it doesn’t create any sympathy for the school shooters, Ben and Arthur, it at least better explains their motivations. In the novel, they were relentlessly bullied, mostly for being gay.

While there’s obviously never any justification for a shooting, a less violent Do Revenge-like retaliation might have been in order — the students who bullied Ben and Arthur, after all, were also responsible for the rape of Ani. I feel like that link is more pronounced in the novel. It’s why many in the school and in the community wrongly believed that Ani had helped orchestrate the shooting, and why Ani had taken such drastic steps to separate her new life from her old. She became who she became in the present, in part, to escape those suspicions.

It’s the violence of the rape and the suddenness of the school shooting in Luckiest Girl Alive that is generating the most controversy. Some viewers felt as though the R-rated film warranted a bolder trigger warning, because “violent content, rape, and sexual content” doesn’t do it justice, particularly given the movie suggested from the trailer. The violent content and rape are, indeed, intense enough to warrant something bolder.

And yet, relative to the novel, the movie itself is both less intense and far less of a shock. In Knoll’s novel, the rape sequences — as one might expect from a book — are longer and far more detailed. What’s particularly unsettling about the novel, however, is that the school shooting comes out of nowhere.

In the movie, it’s mentioned a couple of times early on in the film. We understand plays into the dark mystery of Ani’s past. In the novel, there is no hint of a school shooting until it happens. None whatsoever. We are led to believe that Ani has a secret from her past that could ruin her sterling present-day reputation. We know about the sexual violence, but the misdirect here is that we are led to believe that she may have had an inappropriate relationship with her teacher, Mr. Larson, and that inappropriate relationship might have grown out of Ani’s decision to confide in Mr. Larson about the rape. She spends a lot of time with him afterward, and he becomes protective of her.

That suggestion plays in the back of our mind throughout much of the novel, and the documentarian in Knoll’s book seems intent on pulling out secrets that Ani would prefer remain hidden. That’s the secret we believe is being shrouded. It’s not until well into the third act when Ani gets into a screaming match with Arthur — who had been suspended from school for standing up to the bullies for Ani, and after Ani had been alienated from her friends — that the massacre begins. It’s such an immediate shock that, in the book, what’s actually happening doesn’t register until students literally get their faces blown off and their bodies bisected by bullets. It’s incredibly violent in the novel, and a complete and total surprise.

It’s disturbing and unsettling, but it also works in a way that doesn’t quite work in the film. It’s not as clear in the movie that Ani desperately wanted to kill her rapist, and that she had the opportunity to kill her rapist when the school shooter, Arthur, handed her the gun. She didn’t, of course. In both the book and the movie, she kills Arthur instead. However, it is more impactful — and f**ked up — that her peers, the school, her community, and even the police would use the fact that she was raped against her to illustrate motive for helping to orchestrate the school shooting. I don’t think that’s as fully explored in the movie beyond how upset Ani’s mother (Connie Britton) was with her for “putting herself in a position” to be raped by drinking and hanging out with the wrong crowd.

The novel is far more unsettling in a way that would have generated considerably more controversy than people on social media being upset about the lack of a stronger trigger warning. The way it was depicted in the novel would have left a lot of jaws on the floor. It’s better but more upsetting.

Also, not for nothing, but in the novel, the consequences for Ani’s rapist, Dean, are more detailed after she writes about her experience. His life is ruined, as it should be. Oh, and in the novel, the fiance — played by Finn Wittrock in the movie — is never a good guy. The reader is far happier that she leaves him in the book than in the movie, where Wittrock’s character is somewhat sympathetic, at least until the very end. In the novel, he’s a bro-y cretin, another person of the same breed of boys who assaulted her.


← 'The Rings of Power' Finale: Sauron's True Identity is Revealed, As Is the Stranger's | 5 Shows After Dark: 'The Fastest Woman on Earth' on HBO Max, 'Grey's Anatomy' on ABC →