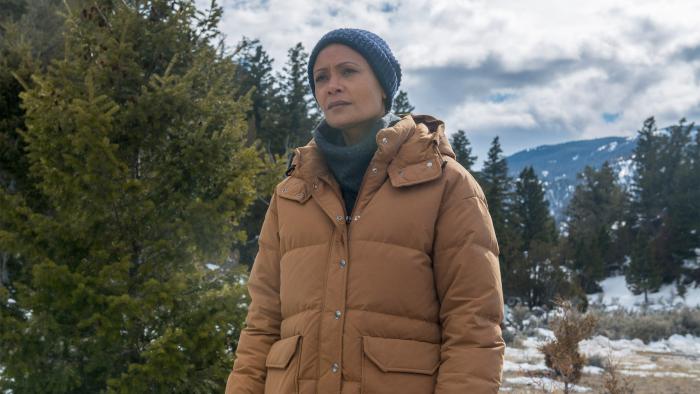 No Mercy in 'God's Country,' a Shocking Story of Devastating, Runaway White Privilege

God’s Country is a very good film, and one that very likely not nearly enough people will watch. Thandiwe Newton is the powerhouse balancing point of this precise and devastating story. It’s also the directorial feature-length debut from Julian Higgins, cowritten by Higgins and Shaye Ogbonna (most recently executive story editor for The CHI).

The premise is deceptively simple: a university professor, Sandra (Newton), lives alone with her beloved dog in a rural canyon in Montana near her campus. She is solitary, riddled by grief after the passing of her mother whom she cared for up until her death. She is the only person of color in a vastly Caucasian small town. Her days are simple, routine: runs with her dog, classes at the campus, sorting through the artifacts of life that her mother left behind her. Wrapped in the snowy Montana quiet, she grieves as the lonely days pass by. She teaches classes to students who adore her, especially Gretchen (Tanaya Beatty), and balances the dry academic professionalism of her mostly white male workplace with her passion for her work.

That changes when a red pickup truck appears in her driveway. They’re just hunters, says her white male colleague Arthur (Kai Lennox) at the university. But it upsets her—she’s alone in the wilderness after all, and they park in her driveway? She leaves a note under the windshield wiper, asking politely that they park elsewhere. That simple, courteous assertion sets off a slow powder keg, an escalating series of taunts and threats towards Sandra from the hunters, two brothers Nathan (Joris Jarsky) and Samuel (Jefferson White), as they refuse to be told what to do. Specifically, to be told by her. Her polite note appears shredded with the carcass of a dead bird. A hunting arrow is shot into her door in the middle of the night.

The escalation is relentless, but handled with subtle, patient beats, paralleled by discussions of “diversity” during the university’s hiring process and the betrayals of confidence waiting behind the status quo of academic life. Sandra pushes back, but always with a tone of decency and dignity: hers is the side of the law, after all. She only wants to be left alone. She only wants to be able to trust the social forces meant to protect her, meant to make her life livable.

At every turn, Sandra is diminished by the network of white people around her. I don’t feel safe in my home, she tells the one local law enforcement officer, Wolf (Jeremy Bobb). He responds by asking why she collected things like the arrow, the bird carcass, why she wants law enforcement involved at all. Why can’t she just let it go? This isn’t an urban environment, he tells her. Implicit racism is captured in spare, sharp lines that give it nowhere to hide, no room to be missed.

The film is composed of small, incisively effective scenes that pull more than their weight. In one would-be promising moment, when Wolf and Sandra go to confront Nathan at his drug-store job about the arrow incident, Wolf apparently successfully chastises Nathan from his perspective of legal authority. But throughout the lecture, the other shoppers (all white) look sidelong at Sandra over the tops of shelves. The stares spell a heavy, silent alienation, a wordless defeat under the would-be protection by the police. Even in a moment of triumph, there’s no relief, because nothing has really changed.

Tension builds from the first frames; the silence undergirding every scene feels brutal, ironclad. Although Sandra tells her students that change is possible, that they as individuals can make a difference for good, that optimism is soundly crushed by the recurring, vicious problem of social power. As patterns build throughout the movie, we’re reminded that the social structures that enable these abuses are themselves patterns repeated until they become definitive for those who benefit from them and want them, however unconsciously, to continue.

It’s a story of devastating, runaway privilege—the sense by the white townspeople that they are entitled to a kind of unspoken power that Sandra somehow inherently threatens. And they clearly, painfully see themselves as the good guys, just trying to live free on the old frontier, blind to their own assumptions about what that means. But the film doesn’t resort to cartoonish depictions, nor does it shake its fist at the poor rural townspeople specifically. The university is equally veined with racism and misogyny—just phrased with different rationalizations.

The ending is shocking, and it’s perfect: Systemic change is beyond the reach of the individual. But vengeance sure isn’t.

God’s Country is not a fun watch. It will probably ruin your day honestly. But if you find yourself in the mood for a hard-hitting, straight-up good movie that will stick with you, you know where to go.

God’s Country is available to rent or buy on all the usual digital platforms.


← 'The Handmaid's Tale' Recap, Season 5 Episode 5: 'Fairytale' | Here's Why Alicent May Be the Biggest Threat to the Throne in 'House of the Dragon' →