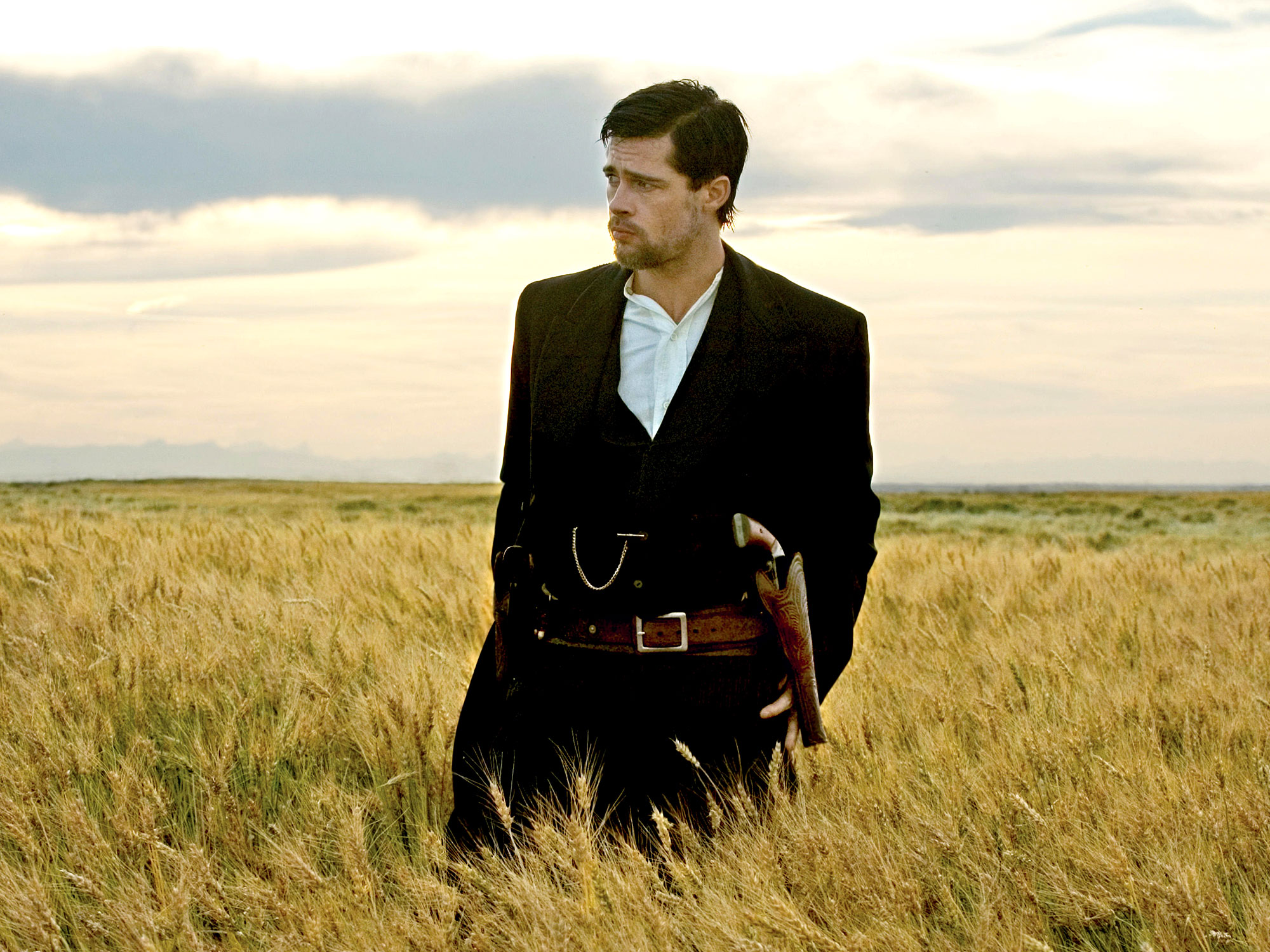 Nevermore to Roam: The Assassination of Jesse James by the Coward Robert Ford

Westerns have always been as much or more about the ideas behind the stories as the stories themselves, meaning it’s not uncommon for the narrative to derive suspense from the anticipation of the inevitable than a sudden burst or plot twist. One of the better examples of this is the title of John Ford’s The Man Who Shot Liberty Valance; the point isn’t that he was shot, but who did it and why. But even that layer of artifice is removed for The Assassination of Jesse James by the Coward Robert Ford, writer-director Andrew Dominik’s haunting, engaging, sweeping story that’s as much a meditation on life in general and Westerns in specific as it is a straightforward story. Drawn from history, the story marches slowly forward to the only conclusion it can reach, but Dominik’s film is all the greater for that freedom, for by knowing where he’s going he can shine the brightest light on where he’s been and turn what could have been an ordinary story into something dark, and reflective, and weirdly beautiful.

Eschewing a title or credits up front, the film instead opens with one of the many expositional scenes that dot the story, detailing the dual life Jesse James (Brad Pitt) is carving out for himself as he approaches his mid-30s in Missouri. Based on Ron Hansen’s novel and often utilizing entire passages, Hugh Ross’ narration is pitch-perfect for the spare, elegiac Western that Dominik is crafting, its hard, flat prose gorgeous in its phrasing and the way it summons the untenable feeling that something lost long ago has been found for a brief time. The American West occupies a rarified time in the nation’s history, and a story about the death of Jesse James is necessarily one about the end of a way of life, and Dominik is gifted enough to let that color the story. In the fall of 1881, James and the rest of his gang — Dick Liddel (Paul Schneider), Wood Hite (Jeremy Renner), Jesse’s brother Frank (Sam Shepard), and brothers Charlie (Sam Rockwell) and Robert Ford (Casey Affleck) — are a shadow of what they used to be, mainly because all of the original members except for Jesse and Frank have been killed or imprisoned. Bob Ford has tagged along with Charlie in hopes of joining the gang for what’s planned to be Jesse’s last big score, a train job, and he pleads his case and begs for inclusion from Frank as the gang is resting up in the woods one day. Affleck is a mumbling, shambling mess of tics and contradictions, and plays the part of a loser to such unnerving perfection that he stops being a villain or anti-hero or anything definable and becomes a complex, tortured man, driven to the edge by his admiration for Jesse and his desire to befriend his boyhood idol, whose dime-book adventures have long fueled his imagination. “I have an appetite for greater things,” Bob tells Frank, but his tone is one of mewling delusion instead of confidence or power. Frank is disgusted with Bob, but Jesse is sympathetic and lets him stay on for the robbery.

All that takes a good long time to unfold, though, and that’s just the first act or so. Dominik has clearly been influenced to a certain degree by Terrence Malick, and he takes plenty of time setting up scenes and advancing the story. All told, the film clocks in around 2 hours and 40 minutes, and while Dominik could have trimmed the film down, whittling away conversations or reaction shots into something with more cuts and a quicker pace, to do so would have been to short-change the story and the ideal for which Dominik is so earnestly striving. Working with director of photography Roger Deakins, Dominik practically paints each frame with light and fog, as intimate with nature and as awed by its presence as Malick ever was. Additionally, he’ll often refrain from cutting back and forth during a conversation every time the speaker changes, opting to let the emotional flow of the exchange dictate the cuts or lack thereof. This dramatically slows the pace of the film, allowing the story to roll gently forward like a drying river.

The film’s second and longest act chases down the various subplots of the other gang members after the robbery: Dick, Wood, and the Ford boys stay for a while with the Fords’ sister, or with Wood’s father over in Kentucky. Dominik doesn’t completely abandon the main narrative — that Bob will eventually shoot and kill Jesse — but he also doesn’t show any hurry to arrive there any time soon. It’s this section of the film where any urgency or sense of time passing breaks down in the quiet and wonderful way it sometimes does in the face of a film as sprawling and uncompromising as this one. The story keeps happening, and events keep unfolding that influence each other and drive the script forward, but it’s also nearly impossible to recap what happened without the memories breaking apart. For instance, Dick puts the moves on Wood’s stepmother, driving a wedge between them that only leads to violence, while Jesse visits the disparate members of his gang to gauge their loyalty and eventually recruits Charlie for some small jobs. But those are all incidental to Dominik’s larger goal of committing to film the purest, basest form of the emotional crises of his characters; basically, this is what it’s like to see Jesse James have an existential breakdown. And it’s riveting.

Of course, it helps that Pitt and Affleck are not only fantastic actors, but performing at the top of their game here. It’s true that their respective film histories give them a leg up into the roles: Pitt has always been a quirky madman, attractive and dangerous and doing his own thing, while Affleck is the less-seen kid brother of another superstar. But they transcend all that in the film, turning in performances that are often uncomfortable in their verisimilitude. Pitt’s bursts of violence are balanced with the easy manner he has around his men, always prancing on the edge of sanity, and though in a few instances there’s something in his laugh or gait that breaks through and reminds you of 12 Monkeys or Fight Club or another film where Pitt had to lose it a little, those moments are very few and far between. For the most part, Pitt loses himself in the role and comes up holding onto a portrait of a weary, disintegrating man, too stubborn to let go but too aware that the world is moving on without him. But Affleck — Affleck is simply fantastic. There’s a queasy honesty in the way Bob looks at Jesse, as if seeing something he loves more than anything else, only in an unhealthy way that would have him possess that man’s life and not just his friendship. Bob wants to be Jesse, but he also wants to be better than Jesse, to somehow earn the man’s love and at the same time be his fiercest enemy. He’s hungry for fame, and life, and independence, and that all shines through in the sad nuances of Affleck’s performance, from the way he hangs his greasy mop of hair to the way he smiles even when he knows he’s going to betray the only person he’s ever really loved.

By the time Dominik reaches the third act, most of the characters have fallen away, making room for a brooding, ponderous psychological showdown between Bob and Jesse. Dominik is doing something amazing here, forging something Shakespearean out of the country’s collective past. That grandeur and damnation comes out in the title, itself so long and somehow proper it feels like something you’d see on the stage a hundred and fifty years ago. When everything was finished — the last shots fired, the last men gone — that title, The Assassination of Jesse James by the Coward Robert Ford, slowly lit up the screen. I sat forward and stared as the lights came up: Was the screen really so small? How had something so weak and transitory managed to support such a wandering, lumbering, heartbreaking beast of a story? It almost didn’t seem possible. Dominik’s film achieves something great and mysterious, turning those dime-book stories into something mythic and brave and completely affecting.