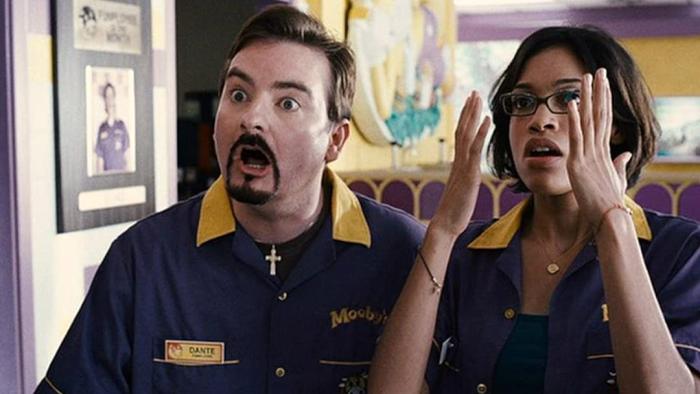 I don’t know how long Kevin Smith has been talking about making Clerks 3 now, but in years past, it never seemed to materialize even as other projects took off. Literally seven years ago, Smith claimed that the Tusk trilogy allowed him to “fail into” Clerks 3, but the movie never made it off the ground despite having the financing in place, because one of the principal cast members opted out.

For whatever reason — the success of Jay and Silent Bob Reboot (which I adored) or his work on Masters of the Universe — it appears that Clerks 3 is back on, begins filming next month, and everyone is returning:

“To be great is to go on.
To go on is to go far.
To go far is to return.”
On August 2, for my 51st birthday, I return to Quick Stop - the little store that started it all - with my friends Dante, Randal, Jay, Silent Bob, Becky, & Elias! Thank you @Lionsgate for making CLERKS III! https://t.co/7IUNdleg8f

In the sequel, Randal enlists Dante, Elias, Jay, and Silent Bob to make a movie immortalizing his life at the convenience store that started it all. Here’s what Mr. Smith had to say about it: “There’s a saying from the Tao that goes something like ‘To be great is to go on. To go on is to go far. To go far is to return.’ Thanks to Lionsgate, we get to return to where it all started with almost the whole cast that started it all!”

Notice the Deadline article references Lionsgate taking global rights to the film, and that’s key here. Say whatever you want about Smith’s films — they’re one of the few things for which I have a deep nostalgia — but the guy has figured out how to be a great business person. He keeps his budgets low, he makes his money back on global distribution rights, and then everything else is gravy. The Jay and Silent Bob Reboot succeeded because the man hustled his ass around the country and attended enough sold-out screenings to recoup his costs, and I’m sure that digital distribution was pure profit.

The man’s output in the last decade or so has been hit-or-miss, but as the guy who runs this goddamn site, I appreciate someone who keeps it low rent and is only interested in making enough money to keep making more movies. He always seems to adapt, too, to the changing models. How long is that sustainable? I don’t know, but he’s been doing it his entire career, which is approaching three decades, so … at least that long. If his career can survive Yoga Hosers, it can survive anything.