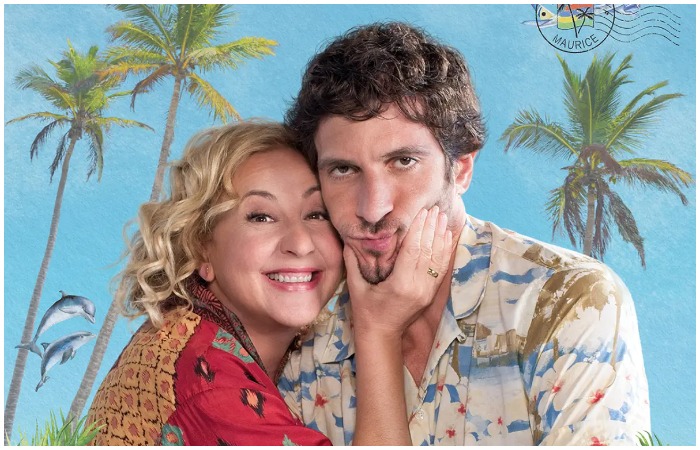 I will insist: This is a horror film. A very innovative proposal in horror, very Spanish, but it’s still a horror film. The fact that it’s packaged as a comedy means nothing; it only heightens the brain’s cognitive dissonance. Is it successful as a horror film? Probably not, but perhaps because it doesn’t give us that experience of catharsis that underlies the horror genre; instead, it shoves our face straight into the things we really don’t ever want to think about.

I could mention the character’s by their names here, but I’d rather refer to them by their family roles, resorting to their archetypical functions to drive home how they are not actually in a comedy; they are being subjected to a Freudian horror of manners.

It all starts after the Son (Quim Gutiérrez) is dumped at the altar in spectacular fashion, his fiancée’s side-piece literally crashing their outdoor wedding through giant letters spelling the word LOVE (in English). As the Son watches his would-be-wife speed off with the other guy in a catatonic state, the Mother (Carmen Machi) walks by his side, non-chalantly claiming she never liked her. This charming man has quite literally seen his shot at being freed by LOVE smashed by a DJ on an old Datsun.

Saddled with thousands of Euros wasted in the ceremony, he realizes he also has to cancel the honeymoon. However, being only hours away from departure, there is no way he can get his money back. Throughout the entire bureaucratic ordeal, the Mother is right by his side, pestering and meddling in, giving us funny dialogues. This gives way to the slow spiraling of the Son, who will start making a series of bad decisions henceforth, from almost propositioning to a colleague at work, to calling his ex-fiancée relentlessly, and finally inviting his Mother to what would’ve been his honeymoon after his Father tells him he never took the Mother on one when they married.

If you are thinking: “Why didn’t he gift his parents with the honeymoon so they could travel together,” this is perhaps the key Freudian slip that triggers the entire journey of the Son, forcing him to face his ultimate character flaw: The horror of the self that has no boundaries with his parents.

They travel to a swanky resort in Mauritius, and as they arrive, for some reason, the Kooky Receptionist thinks they are a married couple and offers them the palatial honeymoon suite with the caveat that it is exclusively set for married couples. Also, all the fun activities are free, including a marriage ceremony following the cultural rites of the islanders. Now, why would a receptionist assume that this senior woman and this much younger man are husband and wife instead of, more logically, mother and son, I cannot tell you. Europeans are progressive and open-minded but use your logic lady.

Nevertheless, the Mother follows along and pressures the Son into pretending they are a couple, because — and I say this with a lot of love — Latin mothers have no shame and will be damned before passing on a bargain. Yes, I’m including Spanish mothers in the Latin category here.

Now we are faced with the actual horror. A series of unrelated punishments befell on the Son, including: the Mother sunbathing topless beside him; the Mother smearing suncream while he is in a fugue state; the Mother pecking him on the lips to make their wedded-couple act look more convincing; a shady silver fox starts sweet-talking the Mother, then she has them get lost during a quad-bike trek through Mauritius’ mountains, ending up in the parts of the island that are not made for tourists (he loses 400 Euros on a rigged cards game); the mother cockblocks him when he is trying to hit it off with a Hot Argentinian guide (using capitals because this is a common archetype in Spanish-language media, more or less based in reality); at some point, he gets the runs from drinking tap water right as the Kooky Receptionist sneaks into their suite to propose a threesome with his “wife”; they are made to play one of those annoying bond-strengthening games for adults, which somehow leads to the Mother placing a papaya on the Son’s mouth after carrying it in her bra; and of course, the Mother tries weed for the first time, falls in love with it, and they both end up arrested by Mauritian police during the course of an afternoon.

As I watched from the fetal position, I couldn’t help but wonder if this 90-minute movie hits you with a heavier dose of the brand of Cringe Horror that The White Lotus presented. The White Lotus is much more accomplished as a satire and in its themes, but in terms of pure horror, Honeymoon With My Mother wins because of how relentless it is: It’s a parade of white Europeans making asses of themselves in a foreign, Global South country, debasing themselves to get the best deal out of capitalism while they are kept at arm’s length from the local population. But it is still a good trade-off; the Europeans get to experience a fantasy construct of the tropical world, while only experiencing a few, isolated moments of social awkwardness or embarrassment. If they are lucky, they can even “find themselves,” at the expense of the local economy.

And boy does the Son finds himself. In short, as tensions with the Mother grow, he begins to realize he is a level 10 clinger, a serial monogamist that jumps from one serious relationship to another (he wastes no time offering to stay with the Hot Argentinian), always putting too much pressure on his girlfriends and always being too picky, because, in the end, he has always been looking for someone like his mother.

But instead of this becoming his breakthrough moment, this is when the movie is fully realized as a proper Horror film: He stays with the Mother, declaring her as his one and only via a saccharine speech. He is now forever trapped in an unhealthy relationship with her, even though she herself has managed to use this vacation for self-fashioning, discovering she can actually have fun while strengthening the bonds with her husband. This is not just Cringe-Horror, this is Freudian Horror. Making the original Spanish title more horrifying in hindsight: Amor de Madre, a mother’s love.

Only watch if you have a strong stomach. Honeymoon With My Mother is currently streaming on Netflix.


← Neil Patrick Harris Finally Apologized After Twitter Reminded Him of That Thing He Did 11 Years Ago | Welcome Back to the Party: Franchising True Crime Fallout →