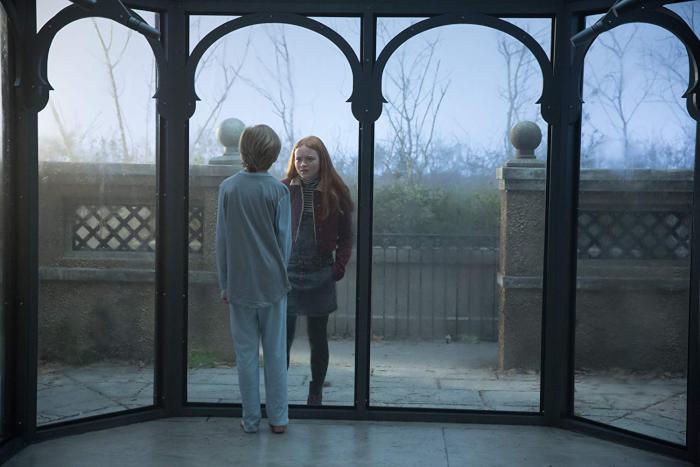 On its surface, Eli is a horror movie about a sickly boy plagued by ghosts in a strange, old mansion he cannot escape. But beneath its tale of pernicious poltergeists and sinister secrets, there’s a queer subtext that sets to explore the evils of religion-fueled homophobia and gay conversion therapy.

Major spoilers below for Eli. We’re talking third act twist, final scene, and all. We highly recommend watching the movie before reading further.

Charlie Shotwell stars as Eli, a young boy who’s been forced to live in a plastic bubble because he’s “allergic to the world” outside of it. So, his parents Rose (Kelly Reilly) and Paul (Max Martini) take him to a specialist, Dr. Thorn (Lili Taylor), who has created a process to save kids like him from this isolating condition. This takes the family to a far-flung “clean house” that looks like it’s definitely haunted. Sure enough, Eli soon spots mutilated ghost kids in hospital gowns roaming the halls, lurking behind curtains, and grabbing at his ankles. The grown-ups dismiss all these horrors as hallucinatory side effects from the treatment. But in the end, we learn that just about everything they’ve told Eli is a lie. The ghosts are real. He’s not allergic to the world. He’s not here to be cured. He’s the son of the devil and he’s here to be saved, whether it kills him or not.

Eli is not declared gay within the film, but he is coded queer by literally coming out of a closet. During one of the ghost attacks, the boy hides in a closet to escape a gruesome intruder. Then he comes out of it to tell his parents his truth, which is that there are ghosts coming after him! His parents, who know him better than anyone, dismiss his perspective outright, siding with Dr. Thorn that these are delusions. Beyond being real within the world of the film, these ghosts are also the Return of the Repressed, a trope in horror that reflects desires deemed taboo. It gives rise to sexually repressed slashers like Halloween’s Michael Myers, the misunderstood monster of James Whale’s Bride of Frankenstein, and the violent blend of wrath and female lust seen in Jennifer’s Body, Ginger Snaps, and Raw. In the case of Eli, this trope resurrects the ghosts of children who were killed for being born just like Eli, different and thereby damned according to former-nun Dr. Thorn.

These ghost children are his queer-coded half-siblings who could not survive Dr. Thorn’s cure, which involves holy water, prayer, psychological warfare, and torture. Thorn insists there is a sickness inside him and only she can save him from it with her blend of medicine and religion. Christian iconography is found throughout the surgery sequences. The nurses wear scrubs cut to recall nuns’ habits. The surgery table is cut like a cross, making Eli’s bound body resemble that of Christ on the Crucifix. The first surgery gives him a stab in his side like Jesus suffered from a Roman’s spear. When his head is screwed into place for brain surgery, he is given his crown of thorns. He will suffer fresh hells besides.

Thorn injects him with a burning serum, trying to modify his very DNA to make Eli like everyone else. Eli’s symptoms of shortness of breath and rashes have to do with stress, not allergens, and Thorn uses this to her advantage. She assaults Eli’s body when he experiences the stress symptoms, then tells him the agony he feels is because of his feelings, not the abuse she’s knowingly putting him through. This mirrors some real-life accounts of gay conversion therapy, where horrendous physical torture was intended to make the victim associate their homosexual desires with pain. In both instances, a young person is brutalized because who they are is offensive to the religious, homophobic grown-ups in their lives. To these Christian parents who pray to Jesus and the devout nun turned deadly crusader, Eli is an abomination who must be converted or saved but cannot be allowed to live his truth.

Real-life conversion therapy weaponizes Bible passages and gaslighting to demonize LGBTQA+ people, telling queer youth they will never know love or joy but will be shut away from all these vibrant experiences because of the inherent sin of their orientation or identity. Eli’s mother makes this false prophecy real by isolating him in a plastic bubble after he began to act in a way she perceived as bad. But what did she see as evidence? Was it when Eli first experienced flashes of red flesh when he was enraged? Eli’s mother clearly knows these symptoms tie to his mood, which is why she coaches him through calming exercises instead of pulling out an Epi-pen. It’s why she urges him away from a violent wish to pay back the bullies who laugh at him with a beating. However, ignoring Eli’s simmering feelings will not make them go away. He’s becoming a young man, and as his hormones kick in, so will more intense desires, like rage and lust.

In Rose’s journey, we see a battle of nature versus nurture. Rose knew who her son was before he did, but believed her influence could shape him into being who she wanted. So, for four years, she kept him away from the world in a bubble so small even she could not physically touch him. When that failed to change what she saw as his flaws, she surrendered him to Dr. Thorn, telling her suffering son, “We’d never have brought you here if we didn’t think you could go on to live a normal life.” Buying into the same kind of rhetoric homophobes have spouted for generations, Rose suggests her son could not have a normal life as he is. Beyond this, she never considered if her conception of a “normal life” is even what her son wants. At this point, her love for Eli is about who she desires him to be, not who he is.

Eli’s macho father rejects him. Paul is less affectionate with the boy, and calls him a “piece of shit” in a way that’s initially played off as a joke but later feels sincere. He’ll side with Thorn in choosing a dead Eli over an uncured one. And in a chilling scene, his father says with a sneer of disgust, “Love is normal. There’s just no doubt in your mind.” He’s talking about his wife’s devotion to her son, but it’s easy to imagine this playing to another form of love that dare not speak its name for fear of getting the sh*t kicked out of it by its wrathful, “man of faith” dad.

In the end, neither the parental pressure of his gruff father or smothering mother, nor the zealous insistence of Dr./Sister Thorn will convert Eli. As they pry him away from the window where he’s shouted support from his ally Haley (Stranger Thing’s Sadie Sink), she cries out, “Don’t be afraid. They’re the ones who are afraid!” She’s right. They are afraid because Eli knows what he saw and he knows who he is. He will not be shaken and will not allow them to take power over him. He has discovered his own power in discovering himself. And it will burn down their world of secrets, restraints, and twisted quests for cruel conformity.

A fiery finale leads to a macabre happy ending for Eli’s hero. Having struck down the sadistic sisters and his deceitful adopted dad, Eli strides out of the house of horrors that burns behind him to be embraced by his chosen family, his half-sister Haley, who shares his demon DNA…and his mother. After years of making parenting choices that pushed her son into emotional isolation and physical torment, Rose ultimately chose Eli over a faith that would demand he be changed or damned. As she steps out into a bold new world, she’s uncertain where the road before them will lead. Haley says they’re going to meet “Dad,” so this may be a literal path to hell. But with the queer context, it may be a path to a New York apartment where a long-lonely queer kid can finally find salvation in a community that sees his colors as fabulous instead of something to be feared.

Eli is now on Netflix.