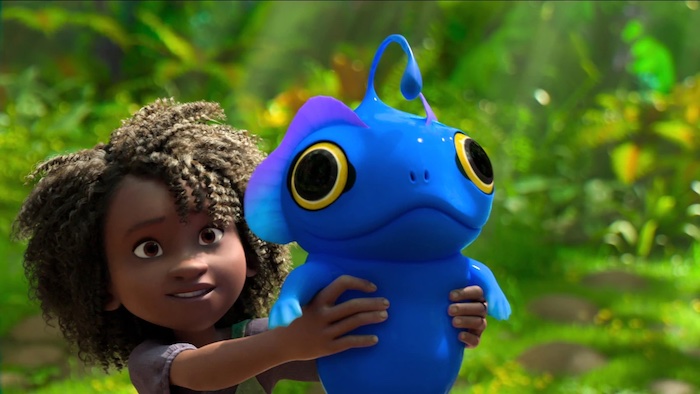 What lies in the sea’s dark underbelly has always both frightened and amazed. Legends have moved across its waters for centuries that speak of beasts like the Kraken that wait to wrap its tentacles around passing ships. Whether you believe they’re real or not, they must have come from something. Chris Williams’ solo debut as director (having previously co-directed Moana, Big Hero 6, and Bolt), co-written with Nell Benjamin, is fuelled by the legends of pirates and sea monsters, told through the eyes of a child who, like many of us, is fascinated by them. In The Sea Beast, the words spoken of in these legends flow off the page into a work that captures all the marvels they hold, with stunning animation and swash-buckling adventure.

Maisie (Zaris-Angel Hator) is an orphan who loves to tell anyone who will listen about the greatest hunting ship, the Inevitable, and its legendary Captain Crow (Jared Harris). She reads about how the sea beasts made the waters, and even villages, unsafe. Then, the hunters came. Hired by the crown, they are pirates who dedicate their lives to hunting these nightmare creatures. She brings her book about Crow and his fearsome crew everywhere she goes, so it’s no surprise that when they come to town, she’s quick to introduce herself. She meets Jacob (Karl Urban), who is poised to one day wear the captain’s hat. It’s quickly evident how similar they are, as they both carry the same fiery determination. While Maisie is in awe of Jacob, he finds her to be a nuisance, even when she explains that her own parents were once hunters. She’s determined to join his crew and won’t take no for an answer, so she stows away in an empty rum barrel. While welcomed by Captain Crow and unwavering in the face of a knife, she may have gotten herself a bit over her head next to the Inevitable’s experienced crew. She’s living in her favorite book, but no matter how many times she’s read its pages, there’s no way to prepare herself for the fight they have up against what is described as the greatest, most terrible thing in the sea: The Red Bluster. This fight leads to some amusing, unexpected turns for Jacob and Maisie, and along the way, they begin to question everything they’ve ever known about what they’ve been taught to fear.

The Sea Beast is thrilling from beginning to end, with humor and heart in between. Jaunty sea shanties are the soundtrack to the many scenes of men fighting monsters, monsters fighting monsters, and men fighting each other. Despite most scenes taking place at sea, it’s immense in scale, with stops on islands and lively, period-accurate towns. The animation is stunning and impressively detailed, from the craftsmanship of the Inevitable to the kingdom’s castle, and the designs of the film’s many monsters fill the audience with child-like curiosity and wonder. The script also takes the time to create fleshed-out characters and it’s just as captivating to see how Maisie and Jacob’s relationship changes as it is to watch their interactions with the Red Bluster, or “Red.”

With a list like Klaus, The Willoughbys, Over the Moon, and this latest work, Netflix is proving to be an animation studio to watch out for. Williams’ film isn’t entirely unique, however, as it’s basically Netflix’s How to Train Your Dragon. Just like the Dreamworks masterpiece, it’s about people who see monsters as their enemy, with a child trying to open everyone’s eyes to the truth. It is a poignant narrative, nevertheless, especially at a time when old traditions seem to be stronger than ever. It’s hard to let go of all you know and begin to believe the opposite of what’s always been seen as the truth. But the only way for the sea beast to co-exist with the pirate is if new stories are written and if the violence of old ways meets the broken halves of a spear.


← The Day's Most Divisive Topic: Self-Checkout Lines | 'Thor: Love and Thunder' Is Fitfully Entertaining But Not Particularly Good →