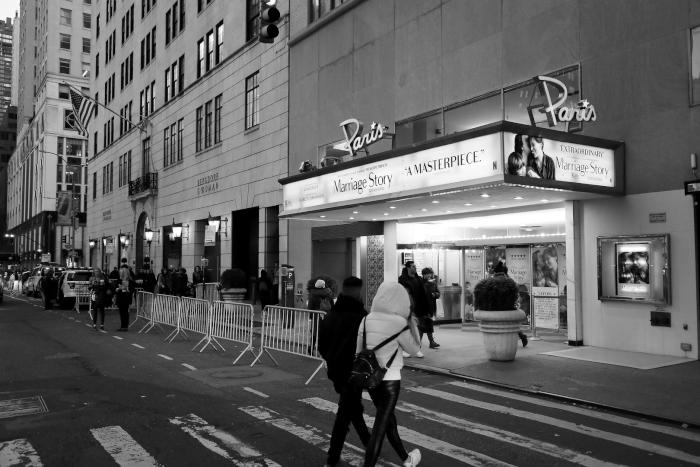 In August of this year, the Paris Theater, a single-screen cinema in Manhattan, closed down. The theater was famed for its dedication to independent and foreign language cinema, with actress Marlene Dietrich cutting the ribbon when it opened in 1948. At a time when independent cinemas are at major risk and countless iconic venues are closing down, the loss of the Paris, one of the country’s oldest art house theaters, felt especially painful for many New Yorkers.

The Paris received a new lease of life when Netflix negotiated with the building’s owner to go forward with a run of their Noah Baumbach drama Marriage Story, one of their hotly tipped awards favorites this season. Now, Netflix are taking over the Paris full-time.

‘After 71 years, the Paris Theatre has an enduring legacy, and remains the destination for a one-of-a-kind movie-going experience,’ said Ted Sarandos, Netflix’s Chief Content Officer. ‘We are incredibly proud to preserve this historic New York institution so it can continue to be a cinematic home for film lovers.’

The streaming service intends to use the theater for special events, screenings, and theatrical releases of their movies. Given the company’s steadfast dedication to the at-home viewing experience, this is certainly an interesting direction for them to take. It signals how keen they are to stay in the good books not only of bodies like the Academy but the increasing array of film-makers who want to work with them but still have wider releases of their movies. Netflix has typically only given prestigious titles this honor at film festivals and in limited New York/Los Angeles releases, so it will be fascinating to see if they start letting things like To All the Boys I’ve Loved Before get in on the cinematic game.

This news comes less than a week after it emerged that the Paramount laws were at risk of being struck down, meaning studios could return to buying up theaters to exclusively screen their own films. That is still a terrifying prospect but I would be hesitant to compare that to what Netflix is doing here. This is a one-screen location in New York, not a multiplex chain, and their priority is still obviously streaming. This just makes it easier for them to meet Academy requirements for the Oscars as well as keep people like Baumbach, Scorsese, and Cuaron happy. If Disney starts doing this, be very afraid. Hell, they’ll aim much higher than one venue.

← Does 'Frozen' Sequel Give Elsa A Girlfriend? The Gay Content Of 'Frozen 2' | Reddit Asks the Question: 'What is a Weird Mix of Foods That Actually Tastes Good?' →