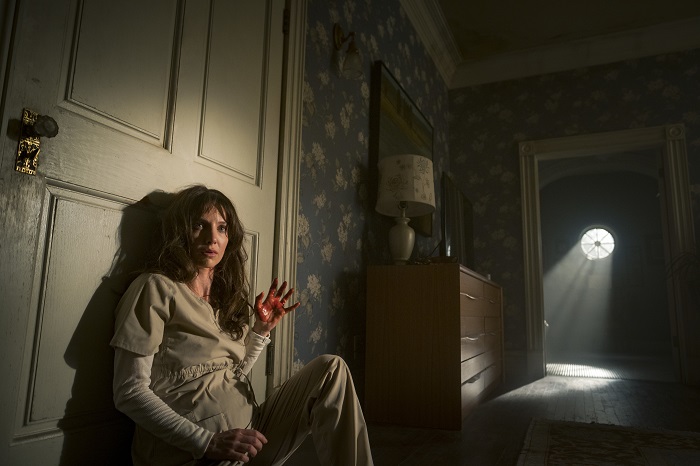 Review: A Self-Aware James Wan Gets Zany in the Deeply Weird and Satisfying 'Malignant'

It’s tempting to look back at classic horror franchises of bygone decades and wonder which of our own will stand the test of time. Will there be another character as long standing as Jason Voorhees or Freddy Kreuger? If there will, they’ll probably be created by James Wan. Wan, best known for launching horror expanded universes with Insidious, Saw, and The Conjuring, is back behind the camera after his trip through the DC Extended Universe to give us more of his signature scares. His newest, Malignant, feels like a self-aware James Wan doing an impression of his imitators, while still leaning on classic influences.

Madison (Annabelle Wallis) is a fragile woman on the brink. She’s been caged in with her abusive partner, suffering a collection of miscarriages. After an intense evening, her partner is killed, and Madison ends up hospitalized and under investigation for his murder. As she tries to put together the shattered pieces of her life, Madison becomes haunted by visions of brutal murders: killings that are happening in real life. While the skeptical police don’t much believe her story, Madison slowly proves her special knowledge, leading them all down a rabbit hole through Madison’s dark past.

There’s a lot more to this twisted tale of a broken woman fighting back that is best grazed by. There are themes woven throughout about new trauma reawakening old, motherhood, and chosen family. These themes are truly secondary to what is a zany horror romp, and are the weakest part of the entire ordeal. They’re worth raising an eyebrow at, as the film callously opens on an abused woman and her pregnancy woes with not enough payoff, but it’s easily forgotten as the movie picks up speed.

And pick up speed it does. Slicing this one into acts, the first third evokes a lot of “What is happening?”, followed by the second evoking “OK, where’s the good stuff?”, and then closes on “WHAT IS HAPPENING?” If the trauma story doesn’t pay off, the scary part does, and the third act is such a berserk blitz of bonkers, you’ll understand why most of the social media reactions were in all caps and full of emojis.

What Wan does here is play games with familiar horror stories in a way that feels like a two-hour-long wink. He’s stuffing in familiar tropes that launched movies like Z, The Unborn, Lights Out, and Mama, but none of those reflect the type of thing he’s making. Much of the influence feels plucked from pre-MCU weirdo superhero flicks like horror icon Sam Raimi’s Darkman and Warren Beatty’s Dick Tracy. It has some knowing gags like a “Present Day” title card over an ambiguous time period and a cheesy campy cop character that’s reminiscent of (Wan-absent) later entries in the Saw canon.

Wan’s camera has always known how to capture a great scare, and this instance is no different. It feels familiar with his usual jump scares, tracking shots, and warped zooms, but now he knows it’s a lark. Just when you think this will be the same old tricks, the movie pulls off an impossible house-tour overhead shot that’ll make you scream and want to draw a map and figure it out. The use of color is a lot of fun, toning most of the feature in icy blues and sparing reds and yellows to cleverly denote a split in worlds. There’s a flashlight and fog bit that makes an action scene feel yanked from a cinematic horror videogame like Man of Medan. The villain is so well-crafted that the way it manipulates the world (sometimes leaping down a fire escape) leaves you guessing throughout whether it’s human and subject to the physical rules of us mortals. It seems simple, as in just crafting a Lipstick Face Demon (from Insidious) competitor for the Wan extended universes, but it’s got the craft element of telling an important part of the story.

Music by Joseph Bishara (who also worked on Wan’s The Conjuring and Insidious) is back to bring more memorable scores. Bishara’s contributions to the Wan jump scare are vast and palpable, and he’s really taken Wan’s campy lead for this flick. There’s the major score that will have you begging for the Pixies lyrics to just drop, and another haunting track played over screams that frames scenes so well.

It was difficult not to turn this entire review into a list of movies it reminded me of, but I think that’s ultimately what Wan has designed. He’s playing with references to references. If House of Wax (2005) was a nod to its predecessors, Malignant is a nod to House of Wax. Malignant is the kind of movie that anyone with any level of knowledge of horror canon can sit down and enjoy, but it’s been especially gift wrapped for those of us who want to try and take it apart and figure it out. It’s a deeply weird horror experience that takes themes of trauma and effective horror tropes and stirs up something zany.

Malignant is playing in theaters and available for streaming in the U.S. on HBO Max as of September 10, 2021.