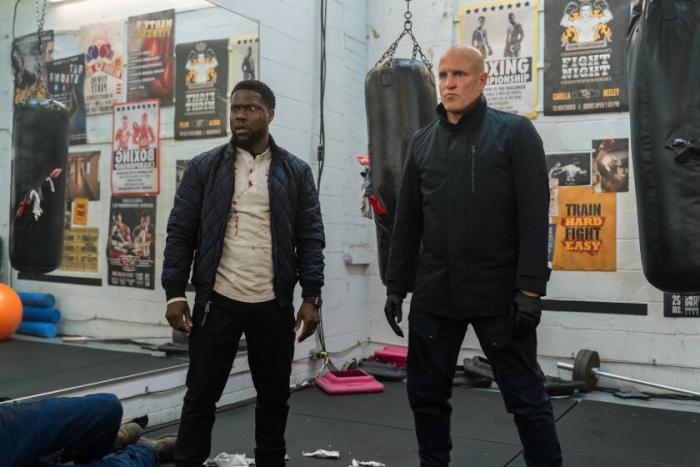 The Man from Toronto is like a straight-to-digital sequel to a Kevin Hart movie that wouldn’t normally feature the actors from the original but for the fact that Netflix (used to have) money to burn. The Man from Toronto is like filling a barrel full of $100 bills and lighting it on fire before actually using any of it on the laughable CGI effects.

If you’ve ever seen a Kevin Hart buddy movie then you know exactly what to expect from The Man from Toronto. Basically, Hart — the human Netflix algorithm — stars as a short, loudmouth, wronged man who won’t shut up. Per usual, he’s paired with a taller, stoic co-star who grunts and occasionally delivers one-line zingers either making fun of Hart’s height or asking Hart’s character to shut up.

Here, the taller, quiet buddy in the formula is played by Woody Harrelson, doing his worst Jason Statham impression as the so-called “Man from Toronto,” an expert in compelling hostages to confess their secrets before killing them. Hart plays Teddy, a whinny try-hard who is fired from his job at a gym after insisting that his “no-touch” boxing classes are a surefire hit. He’s a screw-up trying to hang on to his girlfriend by promising her a romantic weekend getaway. However, the toner on his printer is low, he can’t read the printed address, and he ends up in the wrong cabin, where he is mistaken for The Man from Toronto. In other words, he “pulls a Teddy,” a shitty recurring joke used no less than 10 times in the film.

Because Teddy is a Kevin Hart character, he manages to elicit the requisite confession by being so braying and obnoxious that the hostage eventually spills his guts (in a later sequence, he elicits a confession by literally spilling his guts — vomiting — on a hostage). It turns out that the feds are after The Man from Toronto, and Teddy is pulled in during a sting operation. He is spit back out by the feds and asked to continue posing as The Man from Toronto in order to apprehend the actual Man from Toronto.

The movie is crap. If you like Kevin Hart, The Man from Toronto will test your limits. If you don’t like Kevin Hart, The Man from Toronto will drive you to self-harm. Aside from how off-putting Kevin Hart is, the incoherent screenplay, and the waste of Harrelson, it feels like a movie slapped together on the fly with duct tape and a Kevin Hart pull-string doll by director Patrick Hughes (Hitman’s Wife’s Bodyguard), who has also — god help us — been charged with directing a reimagining of Gareth Evans’ brilliant The Raid for Netflix. It’s an assembly-line-produced hack job completely void of joy or tension, a deplorable, inexcusably awful example of why the Netflix stock has tanked in recent months.


← The Glaring Flaw in 'For All Mankind' | Liar, Liar, Pants On Fire: Boris Johnson's Having A Bad Week →