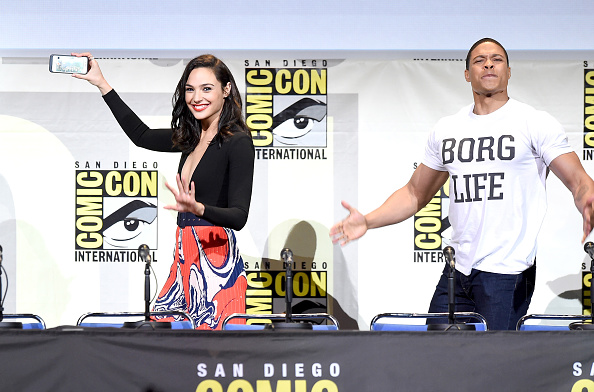 The Hollywood Reporter has up a lengthy profile of Ray Fisher this morning, where he provides more details than he ever has about the investigation that he prompted at Warner Brothers, the treatment of the cast of Justice League by Joss Whedon, and WB’s failure to take appropriate action against Walter Hamada and Geoff Johns. In fact, it sounds like Hamada (the President of DC Films) threw Joss Whedon and Jon Berg (then-DC Films co-chairman) to the wolves to protect himself and Johns. However, the inclusivity problems were as big a problem for those two Whedon and Berg, the latter of whom thought it was “problematic” that Fisher’s character, Cyborg, only smiled twice in the film. (Fisher was also asked to play the character more like the “kindhearted Quasimodo” instead of Frankenstein. Fisher, however, declined, saying he “didn’t have any intention of playing him as a jovial, cathedral-cleaning individual”).

They ended up with a motivated one.

One major point of contention in Justice League was when Whedon and Berg pressured Ray Fisher to deliver the line “Booyah” for Whedon’s cut. It’s a popular line from the character in the animated Teen Titans, but Fisher didn’t want to become across as a Black stereotype, knew if he gave a take saying the line that it would end up in the film, and didn’t understand why only the Black character had a catchphrase in the film. Whedon, Johns, and Berg did not care. In fact, Whedon was a complete asshole about it.

As [Fisher] arrived on set, he says, Whedon stretched out his arms and said a line from Hamlet in a mocking tone: “Speak the speech, I pray you, as I pronounced it to you.” Fisher replied, “Joss — don’t. I’m not in the mood.” As he left the set after saying just that one phrase for the cameras, he says, Whedon called out, “Nice work, Ray.”

The THR piece is the most comprehensive overview of the situation, which also revealed that Fisher was offered a role in The Flash. However, it was billed as a cameo (and paid accordingly) despite a two-week shoot, which Fisher thought was shitty. Fisher nevertheless became upset by press reports likely planted in the trades suggesting that he was demanding double his pay. DC Films eventually let him go, citing a tweet from Fisher that said he would no longer participate in a film associated with Walter Hamada.

Fisher did say that Walter Hamada also conceded that Whedon was a jackass. “He says Hamada ‘called Joss an asshole,’ and said, ‘I’m just looking to get past anything to do with Justice League. Joss isn’t here anymore and I don’t plan on hiring him again.’” That’s abundantly clear by the way Whedon treated Ray Fisher. However, he reportedly treated Jason Momoa and Gal Gadot poorly, as well.

The biggest clash, sources say, came when Whedon pushed Gadot to record lines she didn’t like, threatened to harm Gadot’s career and disparaged Wonder Woman director Patty Jenkins. While Fisher declines to discuss any of what transpired with Gadot, a witness on the production who later spoke to investigators says that after one clash, “Joss was bragging that he’s had it out with Gal. He told her he’s the writer and she’s going to shut up and say the lines and he can make her look incredibly stupid in this movie.”

This is the same guy who also told Fisher, who had some thoughts about Whedon’s revised Justice League script, “It feels like I’m taking notes right now, and I don’t like taking notes from anybody — not even Robert Downey Jr.” I wonder if that’s why the MCU seems to want nothing to do with Whedon anymore after his two Avengers films?