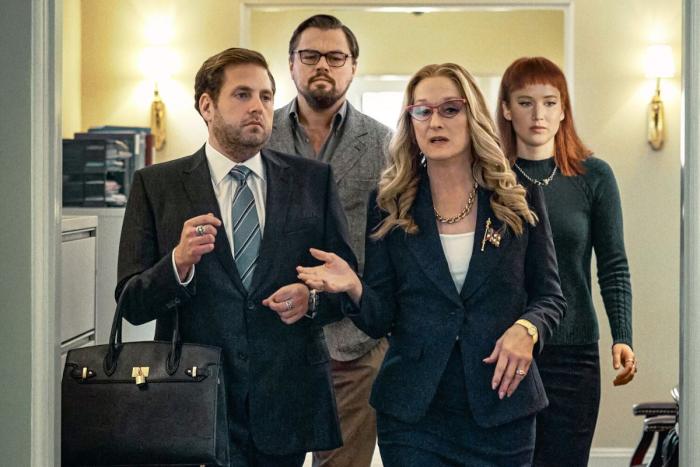 Jimmy Kimmel Is Unhappy with that 'Don't Look Up' Nomination, Too

No one realistically expected Spider-Man: No Way Home to fetch an Oscar nomination for Best Picture yesterday, because no one ever expects a superhero movie to be nominated for Best Picture. They’re not taken seriously as Oscar contenders, although if they were taken seriously, I’m not sure there are any besides The Dark Knight and maybe Logan that I’d consider worthy of a Best Picture nomination. But that’s just me (and I’d given The Harder They Fall a nomination over Spider-Man AND Don’t Look Up AND Nightmare Alley).

Most nominations, at least, are better than Adam McKay’s Don’t Look Up, which was nominated for Best Picture yesterday over more worthy efforts because of the subject material and the cast, but certainly not the movie itself, which is … watchable, but not particularly good. Should the Academy have nominated Spider-Man: No Way Home, instead? I’m not so sure. Should it have been nominated before Don’t Look Up? Absolutely! Jimmy Kimmel agrees, as he told his viewers during last night’s Jimmy Kimmel Live (via Variety):

“How did [‘Spider-Man: No Way Home’] not get one of the 10 nominations for best picture? Forget the fact that the movie made $750 million [in the U.S.] and is still going. This was a great movie. It wasn’t in the top 10 best movies of the year? There were three Spider-Men in it. You’re telling me ‘Don’t Look Up’ was better than ‘Spider-Man?’ It most certainly was not.”

“Even if you go by the critics reviews on Rotten Tomatoes, ‘Don’t Look Up’ got a 46% and ‘Spider-Man: No Way Home’ has 90%. For god’s sake, ‘Jackass Forever’ has an 89%. Why do best picture nominees have to be serious? When did that become a prerequisite for getting nominated for an Academy Award? You wanna know what happened? Voters looked at the list and saw the names Leonardo DiCaprio and Meryl Streep and they checked the box and then they put their kids in the car and went to see the movie ‘Spider-Man.’ And they loved it! But they didn’t vote for it.”

He’s not wrong, although I would like to say that at least movie critics aren’t to blame for this. However, if you look at the Critic’s Choice Award nominees this year, the list of Best Picture nominees is nearly identical to the Oscar Best Picture nominees, and both nominated Don’t Look Up despite the fact that the majority of movie critics didn’t like it. That’s a mystery.

For the record, the single difference between the two lists was that the Academy nominated Drive My Car while the Critics nominated Tick, Tick … Boom!. If you ask me — and I know that no one did — I’d have replaced Don’t Look Up not with Spider-Man but with Tick, Tick … Boom!. Spider-Man: No Way Home, meanwhile, can use the $1.7 billion it has earned at the box office to wipe away its tears.